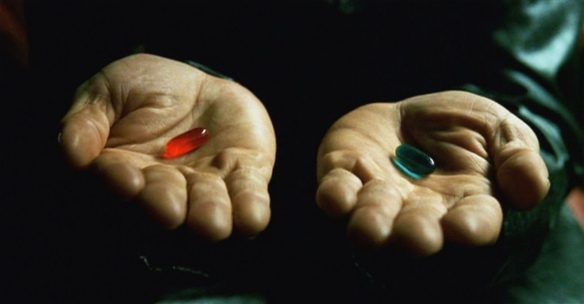 You all remember that iconic Red Pill/Blue Pill scene from The Matrix, right? Just in case you don’t, let me recap it for you. Our protagonist Neo, who is slowly discovering that his perception of reality is an illusion, is offered the choice between taking a red pill or a blue pill. A man named Morpheus explains to Neo that the illusion they’re in is called the Matrix, and serves to stop humans from discovering that they’re nothing but slaves. The blue pill allows Neo to go back to his normal life, while the red pill would allow him to fully wake up from the illusion and begin a quest for truth. Morpheus sums it up nicely:

You take the blue pill, the story ends. You wake up in your bed and believe whatever you want to believe. You take the red pill, you stay in wonderland, and I show you how deep the rabbit hole goes.

We see this Red Pill/Blue Pill symbolism all over the place in pop culture, especially geek culture. Sometimes pills are involved, other times it’s simple amnesia, or some kind of device to plop the hero back into their pre-story life. Why is it so popular? I think it’s because it speaks to a deep part of the human spirit.

While this narrative device gets its name from The Matrix, it’s actually an ancient storytelling technique. Beowulf, a thousand-year-old Old English epic poem, follows the great warrior hero Beowulf as he defeats monsters. At one point, he gets to choose between living a long, peaceful life with his family or dying a glorious death in the heat of battle. Naturally, Beowulf chooses glory (red pill) over peace (blue pill). Stories usually favor the “Red Pill” choices, because those are the exciting ones that kick off the plot. No one wants to read a story that doesn’t have any conflict or change, following a character through his or her daily life while nothing interesting happens. We get enough of that in our own lives, thank you very much. Stories give us the opportunity to live vicariously through adventurers who get to choose to eat the red pill.

Science fiction and fantasy love to play with this trope and all of its implications. In a sixth-season episode of Buffy the Vampire Slayer, “Normal Again”, Buffy learns that her whole life filled with monsters and vampire slaying is nothing more than a delusion produced by schizophrenia, and that she’s been staying in a hospital with a team of doctors trying to help her overcome her psychosis for the last six years. Her monster-fighting friends tell her that the hospital is the hallucination, and Buffy is forced to choose between which version of reality she’s going to accept. Buffy eventually makes her choice—not based on whether or not she’d be able to be a hero and fight monsters, but which version of reality contains those whom she loves. In this case, the implications of the Red Pill’s adventurous reality and the Blue Pill’s peaceful delusion are flipped. The end of the episode heavily implies that the hospital is the true version of reality, and Buffy is effectively taking a Blue Pill of delusion that will bring her a more adventurous life. The episode’s message undercuts the traditional Pill theme—it’s not adventure that is most appealing to our hero, but living a life surrounded by her loved ones.

Doctor Who has turned both aspects of the Pill theme into a integral part of every companion’s story. While no actual pills are involved, the Doctor invites each new companion to travel with him through all of time and space, opening their eyes to a whole new way of looking at the world. Recent seasons hinge entirely on a companion choosing the Red Pill of adventure to begin their journey. Rose, Martha, Donna, Amy, and Clara are irrevocably changed by their experiences with the Doctor. At the end of the journey, some of the companions get a Blue Pill moment before we say goodbye. Donna is forced to forget everything about her time traveling with the Doctor, making her the only companion who really experiences both choices to their fullest extent. Amy chooses to live the quiet life in 1920s New York in order to be with her husband Rory. Martha chooses to leave the Doctor of her own free will, but continues to work with U.N.I.T. and makes a few cameo appearances. Rose is the only companion of New Who who never really gets to choose the Blue Pill side of life, because she’s forcibly (though happily) trapped in a parallel universe with a human copy of the Tenth Doctor. Doctor Who’s treatment of the pill theme tells us that the journey begun by taking the Red Pill eventually comes to an end, and if all goes well, that journey will shape the way you view the world for the rest of your life.

The Pill theme is about more than simple escapism. It’s about seeing things as they really are, that the world really is an enchanted place. One of the saddest perversions of the Pill theme comes in the form of an infamous subforum on Reddit called “The Red Pill”. Its purpose is for strongly anti-feminist men to encourage each other in their sexual exploits and general relationships with women, who are to submit to their men in all things. The story behind the forum’s name comes from the idea that this hyper-intensive-traditional-gender-roles mindset is the way to view the world as it really is. Besides the fact that it’s one of the most sexist places on the internet, these guys get my pity because it seems to promote a totally disenchanted view of the world. It’s harsh and angry and only the strong survive. How can there be any room for hope, mutual love, and idealism? Seeing the world with enchanted eyes doesn’t mean that we necessarily believe in magic, fairies, and knights in shining armor. It means that we can look with wonder at the mysteries of our universe and human experience. Geek culture has pushed the Pill theme to great places. It teaches us that the world isn’t starkly divided up into the mundane and the magical, the real and the imagined. The real message is that perhaps there really doesn’t have to be a difference between the Red Pill and the Blue Pill; we can find adventure in blue and boring reality in red, blue can be true and good and red can be false and evil. We don’t need a pill to choose to see the enchantment in our ordinary lives.