Deadpool is going to be in a movie and it sounds like it’s actually going to be good! No, seriously; this is not an April Fool’s joke.

pic via The Mary Sue

I am a huge fan of Deadpool. I love the way he breaks the fourth wall, I love that he is a character that pokes fun at comic books while still being a part of the Marvel Universe (basically he’s not just a straight up parody), and I love that Deadpool is actually a really complex character. Deadpool is pansexual, which means if his character is portrayed correctly we will have a pansexual character as the lead in a movie. Furthermore, Deadpool is a disabled character with a severe physical disfigurement and major PTSD. Yeah, though many of Deadpool’s comics are wacky and hilarious, he has a lot more depth than many people give him credit for. So let’s talk about this and how, if done well, Deadpool could make for a really fantastic movie, not just by comic book movie standards but by intersectional feminist standards.

Trigger warning for mentions of sexual abuse after the cut. 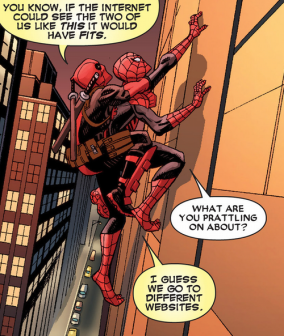 When it was first announced that Deadpool was pansexual, I was definitely not on board. I felt I was being given another clichéd pansexual character. Basically there have only ever been three well known pansexual characters in pop culture: The Todd (Scrubs), Paul L’astname (30 Rock), and now Deadpool. (I don’t include Captain Jack Harkness in this because the general consensus of The Powers That Be is that he is bisexual, despite what fans may think.) Pansexuals are usually defined by “wanting to fuck anything” and being hypersexual as well as very weird sexually, meaning they indulge in kinks even the hardiest kinksters would think were weird. However, I think I was a little harsh when I judged Deadpool this way. (Hey, I’m human I’m allowed to make mistakes and change my mind.) Deadpool is hypersexual and does come off as kind of kinky, but he is not solely defined by these attributes. Do I still think there needs to be a pansexual character that isn’t hypersexual and into kinky sex? Absolutely! And I admit if there was even one less stereotypical pansexual character, I probably would have been thrilled about Deadpool’s sexuality identity. Furthermore, I forgot to take into account how the trauma that Deadpool faced has shaped his attitude toward sex, but I’ll say more on that in a moment. As such, I am excited to see a pansexual Deadpool on the big screen. Some fans of the comics may brush off Deadpool flirting with men and non-binary individuals as a joke and not an indication of his sexuality, but that is such bullshit, especially since Deadpool’s flirtations with women are often just as silly, and no one claims he is just joking then. Deadpool has been in relationships with men, women, and non-binary people throughout the comics, so it will be a real shame if Deadpool is presented as strictly heterosexual in the movie.

I mentioned that Deadpool’s trauma shaped his sexual behavior and can explain many of his hypersexual tendencies in addition to his treatment of relationships and sex in general. While Deadpool’s past before Weapon X Program is often vague, there have been a few versions of the comics that delve into things a little more.

It’s always been known that Deadpool had some sort of trauma in his past. It’s usually mentioned that his father was neglectful and even physically violent, but the comic Deadpool Max explores that more in depth. In the comic Deadpool’s mother sexually abused him, and his father was often physically abusive. Though this comic is not necessarily in continuity (meaning not part of the canon Marvel Universe), it still gives us insight into one possible backstory for Deadpool. Later on in the main continuity, Deadpool is raped by Typhoid Mary, further adding to his issue with sex and relationships. After both these events Deadpool’s basic attitude toward sex and relationship is to take it as a joke and to keep relationships as superficial as possible. So yeah, all of Deadpool’s jokey sexual behavior is actually hiding issues that are a lot deeper. It’s rare to have a male character who has suffered from sexual trauma, especially sexual trauma at the hands of women. Having Deadpool as a character who gives voice to those issues is really important.

Deadpool is also a person with both a physical and mental disability. Deadpool joined Weapon X because he was diagnosed with terminal cancer. He allowed Weapon X to experiment on him and was given Wolverine’s healing factor, but he was tortured and mistreated, leading to have severe post-traumatic stress disorder (which he probably also suffered from before due to his childhood trauma). Deadpool’s physical deformities are due to the fact that his cancer is not actually cured; instead, his healing factor is constantly trying to keep up with his illness so his skin is scarred from tumors that his body is trying to heal. This leaves Deadpool with constant chronic pain, as well as difficulties with self acceptance, and he is often socially othered because of his physical appearance. Deadpool also seems to suffer from a variety of other mental disabilities, but these are portrayed pretty sporadically and Deadpool is often labeled as being simply “insane”. However, it’s been theorized that Deadpool suffers from everything from anxiety to schizophrenia to dissociative identity disorder and there seems to be some evidence for all of these, even if these disabilities aren’t always portrayed very well.

I know that some of what I just wrote makes Deadpool seem like this super serious and dark comic, but that’s not the case. What’s great about the character is how he can tackle all these issues but still keep things relatively light (though obviously the comics do have their serious moments). It makes some of the storylines easier to read than they would have if the tone of the comics was much more serious. People tend to paint Deadpool as this one-trick pony and I think that really does the character a disservice, since he is not only hilarious, but also extremely complex. I certainly hope that the new movie captures that. The creators and actors in the movie all seem to really care about the character and want the character to be portrayed correctly. I choose to believe those working on the movie will keep Deadpool as well-rounded and complex as he actually is.