The other day my friends finally dragged me into idol hell. To some of you, you know exactly what this means. To others, let me introduce you to Love Live School Idol Festival, based off the current popular anime Love Live. I have not watched the anime myself—everything I know is strictly from the game and what other people have told me—but I don’t believe the plot would be that much different. In the anime, nine high school girls band together to create an idol group. Idol Festival takes that plotline and makes it into the most addicting rhythm game ever. 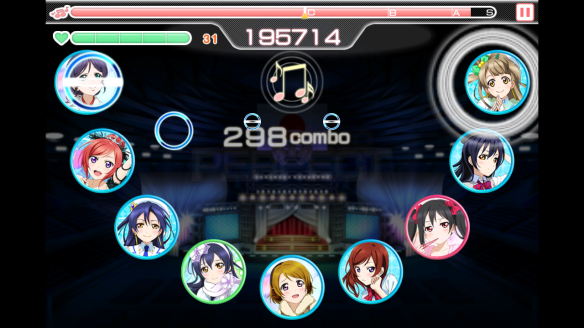 Idol Festival’s game mechanics are, perhaps unsurprisingly, simple. On the screen, a set of nine dots are laid out. As the music plays, the player, in turn, must tap the corresponding circle when they are highlighted: it’s kind of like DDR (Dance Dance Revolution) for your fingers, for lack of a better game to compare it to. You get more points by leveling up your idols; represented by different girls on cards; the usefulness of these cards represented by if they’re canon characters or not. The non-canon characters are there to allow beginners to fill their parties, but will eventually become useless as it’s impossible to reach certain ranks of completion without canon character cards. The idols are then leveled up by “practicing” with other idols (essentially “feeding” other idols to one to make that specific idol stronger), and leveled up even more—to an “idolized” state—when they practice with the same exact card. And… that’s it. It’s a fun tablet game, or computer if you run BlueStacks, but nothing terribly out of the ordinary. However, as I was playing through, unlocking different character stories and just shitting around, I noticed a trend that is also indicative of a worrying cultural shift in cartoon consumption both in Japan and in America.

Back in the younger, more innocent days of the internet, I remember “squeeing” in glee over the site Bishoujomon (and its offshoot, Bishonenmon): a site that allowed a user, after answering a certain amount of questions correctly, to “capture” a certain favorite character. This, alongside those sites that allowed fangirls and fanboys alike to “marry” their favorite characters, displayed a sort of innocence and was mostly used to show off in your forum signatures which characters were your favorites. Of course it was mostly accepted that no one was actually married to these characters and that such things were silly declarations of our love for fictitious characters that we would never meet outside of a show or a book. Unfortunately, this kind of mindset still exists, but its no longer so innocent. With the passing of time, fans of anime have gone back and forth on whether or not to embrace the term “otaku” (usually interpreted as “mega fan” or “fanatic”), and it seems that the scene as a whole has finally decided that being an otaku is not such a great thing. When even Hayao Miyazaki comes out and reportedly says that “the problem with the anime industry is [that] it’s full of otaku”, one has to take a step back and look and what the underlying reason is. Of course Miyazaki isn’t speaking of fans in general; of course he’s not saying that people who enjoy anime and manga should stop. What he’s speaking of is a growing shamelessness within a small subset of anime fans who have too much power at the moment and are influencing the scene at large. This influence can easily be seen with the popularity of series like Madoka Magica and Love Live, in addition to various other so-called “moe” anime. And the result of this influence is the sexualization of young girls. There has always been a market for sexualized little girls—both in real life pornography (“barely legal teens!” you may have read on an ad on some random-ass website before) and cartoon porn. Anime has the unfortunate reputation of drawing girls who look like they’re twelve, but the artists claim that they’re eighteen or thirty, or something ridiculous like that. However, now more than ever, these sorts of things have been becoming more commonplace in media. No longer are these people shamed into their basements, but instead, they have their tastes catered to. Why? Because these are the audiences that are spending loads of money. We may find comfort in knowing that real-life child pornography will always be illegal, but despite this, according to Thorn (Digital Defender of Children), the National Center for Missing and Exploited Children “reviewed 22 million images and videos of suspected child sexual abuse imagery in its victim identification program in 2013—more than a 5000% increase from 2007.” This is a worrying statistic. It is also an entirely American statistic; however, it should be mentioned that Japan just recently revised their laws to outlaw child pornography (except in manga). While real-life child pornography is being cracked down on, conversely, it seems as though animated child/teenage porn is reaching a new zenith, and I think, at least in the anime scene, it has a lot to do with “waifu” culture.

Jokingly, I’m sure you’ve heard the term thrown around—a waifu being a female character that someone, typically male, is a huge fan of. At first glance, this seems close to the aforementioned marrying fictional characters online. However, there’s a huge culture of pornography that surrounds waifu culture, which wouldn’t be a problem if these waifus weren’t largely very young girls. A comparable Western example that many may be familiar with is brony culture. The characters in My Little Pony: Friendship Is Magic are horses, so it could be argued that their ages are inconsequential: however that is an incredibly narrow, uneducated idea. The show is marketed towards younger girls—or it was supposed to be—and when the ponies turn human in the films, they’re clearly high school age. Though fan measures have been taken to remove porn from the Google image search results (to provide a safer environment for the younger audience), the ravenous and frightening dedication some bronies have for their horse waifus produce hundreds of pieces of pornography depicting the equivalent of a teenage girl. And still, while these specific parts of the fandom are by no means encouraged, bronies themselves are unfortunately the loudest and thus the most heard audience for a show that is not for them: they are the main fan base because they are the ones with the money and can beat out a parent buying toys for their children any day. While bronies are not outrageously catered to, the Japanese otaku are; this can’t be anything but evident with series like Love Live, or at least its game. Every important girl in Idol Festival is a teenager. Every single one. The idol scene in real life isn’t exactly the most squeaky clean thing, I’m aware. However, this game is clearly catered towards the otaku. That the girls are wearing sometimes revealing costumes with strangely seductive faces isn’t anything new, really, but the game constantly reinforces the idea that this is the right way to view younger girl characters (which can have a direct influence on real life perceptions of younger girls). An example of this is when the player unlocks the story of Hitomi Shiga, who is looking for the mightiest armor to fight demons (I don’t get it either…). When what I’m assuming is the player claims to have said armor and gives it to her, she is suddenly dressed in a much shorter, revealing outfit. Furthermore she says this:

*Groans loudly in annoyance* She doesn’t even look happy about it.

Like we need more games reinforcing the idea that less armor for women is somehow just as effective as full plate armor. Additionally, on the home screen for the game, the canon girls you have talk to you. Most of the time they simply say things like “I wonder how rice gets so white” or “we should practice more!” However, if the player clicks on them, they get flustered and start asking about why you touched them, or, one particularly gross line states that if the player touches them, the girl will have to touch them back in retaliation. When your largest audience for the series seems to be men in their twenties, this kind of thing is incredibly skeevy. In the end, however, Love Live‘s situation is something I hope doesn’t cross over to any other country, America or not. Whereas no one debates that MLP: FIM was completely hijacked by an older male audience, Love Live was not. Love Live was created by older men for older men. The manga is published in a seinen serial—a type of manga usually catered towards older teenage boys (or even men as old as their fifties!). Additionally the company that created Love Live, ASCII Media Works, is completely entrenched in the bishoujo game scene. (Bishoujo games being games that star cute young girls, but are designed with a male audience in mind.) This series is clearly made to grab the attention of older men, which any look at the fan events could prove that it does. At this point, companies really need to stop looking at their financial bottom line and start thinking about how the media they put out can adversely affect society. This sort of oogling young girls can only become more normalized as these types of moe anime become more and more popular (is anyone still amazed that OreImo was actually a thing??). While yes, even in-show or in-game this sort of attention the protagonist or player can give to these younger girls is chastised, the chastising is done in such a way as to not insult the player, but rather, gently cajoles them into doing it more. Doing this isn’t a real problem. And that, in an age where children are more at risk than ever to be sexually abused or involved in pornography and sex trafficking, is reprehensible.

13 thoughts on “Love Live: School Idol Festival and Trends That Should Not Be Trending In the Consumption of Cartoons”