Recently I’ve been spending lots of time on YouTube, and I subscribed to Funimation so I could keep up to date with current anime. Not too long ago I saw the title Yurikuma Arashi. I didn’t know anything about it, but the art in the screencap looked cute, so I watched a random episode. I’ll admit that I’m not the most eloquent person, but I was at a complete loss after watching the opening credits.

I sat there dumbfounded out of sheer confusion. A few minutes later I smacked myself in the head. I knew at least what half of the title meant, but I just didn’t pay attention to it. Yuri, in Japanese, refers to a genre about lesbian relationships. Kuma translates to bear. Then I looked up arashi, which means storm. I was intrigued—if nothing else I wanted to know what “lesbian bear storm” was about—so I decided to finish the series in order. When I saw the opening I was doubtful; worried it was going to be some strange harem anime or something. After watching it, I was pleasantly surprised. It’s bizarre to be sure, but the message was genuine. Almost all of the characters struggle with being lesbians because the world they live in tries to conform them into something else, or in some circumstances, kill them. It’s not the deepest love story, but it shows how society can shun people for being different, or try to change them from being who they truly are. Yurikuma Arashi shows how queer relationships can be complex and difficult, and touches on different forms of love, even familial.

If you’d like to see the show, it’s on funimation’s channel on YouTube, though the entire series is not loaded yet. The full series is offered free on Hulu at present. Bear in mind that it is rated for a mature audience. Spoilers after the jump!

Yurikuma Arashi is about Kureha Tsubaki, a girl who is openly queer, and sees her girlfriend regularly at Arashigaoka Academy. One day her girlfriend, Sumika Izumino, is killed and eaten by a bear. She vows to kill the bear that killed Sumika, but avoids her classmates at the academy for help. It’s understandable, since these classmates frequently have meetings where they choose who to exclude socially, a process they call, “The Invisible Storm”. They claim to fight for everyone’s safety against the bears, and that everyone is better off following the status quo and staying together as a group.

Soon after Sumika is killed, two girls, Lulu Yurigasaki and Ginko Yurishiro, join Arashigaoka Academy. They frequently stop other bears from eating Kureha, and later reveal they are bears themselves. Kureha is upset, but learns to forgive them since they haven’t done anything to hurt her. As time passes we learn that Kureha’s mother had been killed by a bear, and Ginko is framed as the bear that killed her, along with letting another bear kill Sumika. Ginko admits to watching another bear kill Sumika, but explains that her mother was killed by someone else. Kureha eventually forgives her, but her classmates soon kidnap her. They explain that they learned Ginko is a bear, and plan to have Kureha kill Ginko as a punishment for being different and endangering others. Kureha and Ginko argue just before the group tries to get Kureha to kill her, when Ginko reveals the reason she became a girl was to tell her that she loved her. Kureha says that she’s come to love her too, but they can’t be together in this world. She prays to Lady Kumalia, the goddess of this world, to be turned into a bear. Her prayer is granted, and they leave to another world to live together.

There’s a surprising amount of gun waving in this show….

The history and magic in this world is rather vague, and most of it is left ambiguous. It’s used more for symbolism, rather than as a concrete rule for how the world works. One such instance is the Wall of Severance. The anime does show physical walls in the city, though they don’t stretch far across the area. The purpose of the Wall of Severance is to keep the bears out. In the metaphorical sense, it goes hand in hand with the Invisible Storm. They’re the mental barriers and the social status quo that people use to conform others. There are obvious parallels in the real world to how the LGBTQ+ community is treated publicly or privately. It’s heartbreaking to see what happens to Kureha, just because she’s different. She isn’t trying to convert people or prove a point to anyone, she’s just a modest girl trying to live her life. Throughout the anime, her classmates have made fun of her dead girlfriend, set fire to her late mother’s flowerbed, and tried to have her kill Ginko, all because she didn’t want to be part of the crowd. What’s even stranger is when these classmates save Kureha from a bear attack, and even chase after it rather than pester her. They honestly believe they’re doing what’s right for the greater good. Oddly, The Invisible Storm mentions “finding evil” as their main objective, but their view of evil isn’t narrowed down to primarily hunting bears or “making girls invisible” by harassing them. It’s baffling since not every bear in the show has been shown to be queer; my guess is they’re so driven to kill any bear that they find that being queer is “the lesser evil” of the two. The true intentions of the group are really vague, but in a certain sense it shows a different perspective for those kind of groups in real life. The anime not only shows Kureha’s perspective on being harassed, but how people who mean well can hurt others as well, whether they intend to or not. 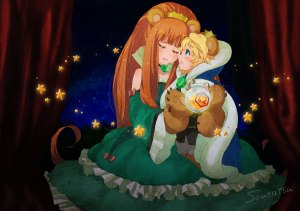 Something I expected in Yurikuma Arashi was the topic of desire. The show jokes around with sexual desire, but it’s not the main focus. Instead they talked about a different kind of desire: the desire for attention and love. There were numerous bears in the show that tried to eat/kill Kureha, and each time it was because she was getting love from someone they loved. The most touching story to me though was the story of Lulu’s past. She used to be a princess, and adored the attention she got from the kingdom. One day her brother was born, and the kingdom adored him instead. He never did anything malicious towards her, but she despised him nonetheless. He would do anything to get his sister’s love, and at some point she decided she had enough. Lulu literally puts her brother in a box and pushes him off a cliff, saying that if he got her honey she would finally love him. Sadly he came back, and Lulu would toss his honey out the window, then push him off another cliff. This would continue on and on, until he disappeared for a long time. After she got attention from everyone in the kingdom again, she yearned for her brother’s attention. Ginko comes to return some of the honey she previously tossed away, and Lulu follows Ginko past The Wall of Severance to help her. Lulu falls in love with Ginko, but it remains unrequited. By the end of the show, she returns home to the kingdom, and finds her brother there. She does find love, it’s just not romantic love. Something that frustrates me in media in general is this focus on romantic love, especially the emphasis that everyone needs to have it. I really appreciate how this show didn’t focus entirely on romance, and showed that even though you could have unrequited feelings with someone, you can always find love elsewhere.

When I started watching this show, I was drawn to it because it was odd. Once I finished the series, I found myself rooting for Ginko, Lulu, and Kureha to be together (though sadly that doesn’t happen). The symbolism of the world is never blatantly explained, but I think the show is better for it. How the plot unfolds lets you see the story as Kureha lets you experience it from her perspective. It’s also great to see media showing different forms of love without being explicitly sexual. I can’t tell you how grateful I was for the lack of boob physics. Overall it’s a great anime, and I’d recommend checking it out if you haven’t already!

Do you have different theories for the show? Feel free to ask questions or comment below!

3 thoughts on “A Bearhug To The Heart I Didn’t Expect: A Yurikuma Arashi Review”