Bits and pieces of news about Doctor Who Series 9 have been starting to emerge over the past few weeks, not least of which that Arya Stark herself, Maisie Williams, would be starring in an episode. While the show has certainly had its ups and downs in quality over the last few years, I’ve noticed a distressing trend, and one I can’t really even blame solely on Moffat (even if I’d like to).

Look at it this way: you’re watching Doctor Who. This season’s companion has a Black boyfriend, and the Doctor treats him disrespectfully and refuses to acknowledge his identity by constantly misidentifying him. Which Doctor am I talking about?

Trick question—it could be Mickey or Danny. This forces me to point out a very unsettling pattern in Doctor Who: the Doctor’s behavior toward the men of color in his companions’ lives is pretty dang racist. 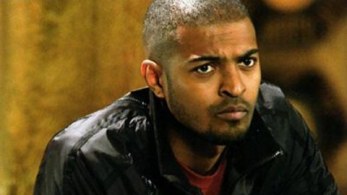 Throughout the first two series and Doctors of new Who, the Doctor continuously scoffs at Mickey for being suspicious or disbelieving of his alien knowledge and abilities. He also displays a pretty appalling lack of empathy toward poor Mickey after bringing Rose home a year later than he intended. Mickey, the Black boyfriend of a pretty young white woman, has gone an entire year as the primary suspect in said white woman’s murder, but since we’re supposed to connect with Rose and the Doctor over Mickey, it’s handwaved as a “well, it’s alright now, isn’t it?” non-issue. The Doctor clearly considers Mickey below him, and refuses to call him by his actual name, calling him Ricky instead. This “joke” is carried all the way to Pete’s World in Series 2, where we discover that Mickey’s alternate universe double is actually named Ricky.

We as the audience are meant to be dazzled by/sympathetic to the Doctor and Rose, and by default the intensity of their relationship with each other. Because of this framing, Mickey’s real, perfectly sensible feelings are portrayed as pathetic and stupid by the narrative. He’s treated as part of the reason Rose leaves her life behind, he’s seen as butting in on the budding OTP when he tags along as a companion, and his not-inconsequential help over the course of his tenure on the show is often forgotten.

But while the Doctor’s behavior toward Mickey is certainly inappropriate and rude, one example does not a pattern make. This brings me to Clara and Danny’s relationship in Series 8. I was originally pleased when Danny Pink was cast for the show; it had been literal years since the show had a recurring character of color. Unfortunately, it turns out that the Doctor’s face may change, but his behavior toward companions’ Black boyfriends doesn’t.

Yeah, it’s kind of meaningless at this point.

The Doctor is dismissive and outright disapproving of Clara’s relationship with Danny from the get-go, and isn’t ashamed about saying so to Danny’s face. He encourages her to leave him, or at least to continue traveling with the Doctor despite Danny’s concerns about her doing so. He meanwhile does nothing to earn Danny’s trust, and only really displays respect for Danny after Danny has died, when he manipulates his own Cyber-conversion to destroy the Cybermen trying to invade Earth.

There’s something especially unpleasant about the Doctor’s insistence that Danny can’t possibly be a maths teacher and must be a PE teacher. The writers may have meant the Doctor to be implying that a grunt soldier who follows orders unquestioningly—the way the Doctor sees Danny—couldn’t possibly teach something as beautiful and intellectual as mathematics. However, there’s a real social issue that Black men are seen as physical and unintelligent, and insisting that Danny can’t possibly be a maths teacher in favor of his being a Phys Ed instructor, intentionally or not, contributes to this stereotype.

Finally, if you are going to argue that maybe the Doctor just doesn’t like his companions’ boyfriends as a rule, there’s a skinny white guy in a gladiator costume here to prove you wrong. In a blatant counterpoint to Mickey and Danny, the Doctor warms to Rory Williams almost immediately. Rory has a similarly immediate mistrust of the Doctor and feelings of inadequacy compared to the Doctor in regards to the nature of the Time Lord’s relationship with Amy Pond, who’s Rory’s fiancée. But where the Doctor constantly excludes, degrades, and talks down to both Mickey and Danny, Rory is sought out, invited aboard the TARDIS, and instated as a full-time companion within an episode or two. Furthermore, the Doctor lauds Rory’s violent behavior under his Lone Centurion persona (see: destroying the Cyberfleet in “A Good Man Goes To War” among other things) while scorning Danny’s military history, even though Danny argues that much of his service involved humanitarian aid missions.

Doctor Who isn’t a perfect show by any means, and certainly not as it concerns race. I’m not below the subtle self-promotion that is pointing out that a book dissecting the show’s stormy relationship with race already exists (I wrote a chapter in it, hells yeah). 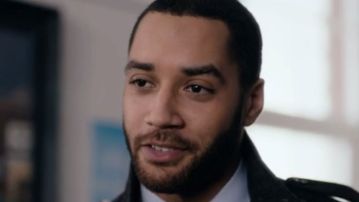 But I had hoped that perhaps the writers and show-runners would learn from their mistakes with Mickey and avoid making another Black boyfriend character the series-long butt of running jokes and unpleasant accusations. The Doctor is supposed to see the beauty and inherent worth in all living things; it’d be cool if that respect could translate to men of color as well as Silurians and Daleks and starwhales.