When I was in grad school I had a Biblical Studies instructor who was from Romania. He was a member of the Romanian Orthodox Church, but he seemed to have a great love of Judaism and was an active advocate against anti-Semitism. I remember him sadly telling us how he was sometimes uncomfortable when he went back to Europe to visit family because he claimed that anti-Semitism was once again on the rise. That was three years ago. Now it seems like I can’t go a day without reading about how anti-Semitism is on the rise not just in Europe but in the U.S. as well. And sadly we can see this attitude reflected in our own geek culture. Today I am going to specifically talk about the anti-Semitism in the X-Men/Marvel Movie Universe. 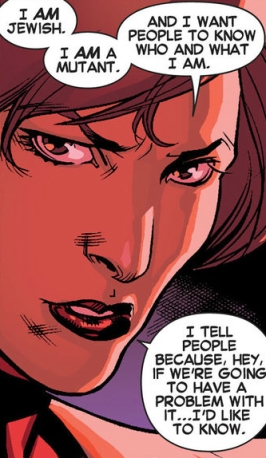 First, let’s talk about the X-Men movies. Can you name all the Jewish characters in the X-Men movies? If you just answered Magneto, then you are very wrong. Magneto, Kitty Pryde, Quicksilver, and Scarlet Witch are all Jewish characters, but you wouldn’t know that if you had only watched the movies. Kitty’s Jewish heritage is extremely important to her in the comics, but there is no mention of her Jewish identity in any of the X-Men movies. The X-Men franchise takes erasing Jewish identity up a notch in the movie X-Men: Days of Future Past, which introduces us to Pietro and Wanda, aka Quicksilver and Scarlet Witch. Well, the movie introduced us to Quicksilver; Wanda was portrayed as a baby (despite the fact that the two are twins in the comics) and her name was never even mentioned. Quicksilver, meanwhile, was alluded to as being Jewish at least. After rescuing Magneto, Quicksilver mentions that his mom told him that his father could control metal: this is a nod to the fact that Magneto is actually Quicksilver’s father. But if you don’t already know that, then this moment goes by so quick (and is never mentioned again) that it hardly matters as a relevant part of Quicksilver’s character. Quicksilver’s name was also Westernized from Pietro to Peter in an attempt to erase not only Pietro’s Jewish identity but his Romani identity as well.

So the only character in the X-Men franchise whose Jewish identity is ever specifically mentioned and explored is Magneto. In the first X-Men movie we see Magneto as a young boy being taken away to a concentration camp, and again we see Magneto hunting down and killing Nazis in X-Men: First Class. In other movies Magneto references his own experiences with prejudice as a Jewish man to justify his violent motives. While Magneto is an amazing, well-written, complex character, he is still portrayed as a villain who murders people for his own purposes and uses his background to justify it. Having another Jewish character to challenge Magneto on his beliefs would have been excellent storytelling. Instead what we get is the erasing of all other characters’ Jewish identities and the only character who is identified as Jewish is our murderous villain.

Then we have the Marvel Cinematic Universe, which doesn’t really have any Jewish characters (at least not in the main cast) until recently. Quicksilver and Scarlet Witch are being introduced into the Avengers movies. However, because Marvel doesn’t own the movie rights to the X-Men, it is doubtful that any mention of Pietro and Wanda being related to Magneto will be mentioned. But it would be easy to still identify them as Jewish/Romani people right? Well, it’s still not certain that will actually what happen either, especially since their characters are not being portrayed by Jewish or Romani actors. But no matter what, there will be problems with their portrayal. Here is why: recently Alison “Boom” Baumgartner from Science Fiction.com discussed some of the issues with how Pietro and Wanda are being portrayed in the upcoming Avengers movie. She writes:

Firstly, the two characters have a significant portion of their background removed from them, their Roma and Jewish heritage cast aside for two actors who are talented, but definitely of neither origin. So this begs the question: will their backstory be erased?

Oh, it turns out yes. Aaron Tyler Johnson (Quicksilver) said, “Yeah, [Scarlet Witch and Quicksilver] volunteer to HYDRA to be experimented on and then they become enhanced so that’s where their powers come from.”

So, basically, two Jewish/Romani characters who were persecuted for their heritage in the comic books will be volunteering to work with HYDRA… a Neo-Nazi organization. Is no one else raising eyebrows about this? I feel like eyebrows need to be raised.

Yeah, you read that right. Pietro and Wanda volunteered to work for HYDRA. What the hell!? Oh no, it’s not HYDRA’s fault—Pietro and Wanda volunteered to help them! Again I say: What the hell!? This doesn’t just erase Pietro and Wanda’s Jewish/Romani identity, but also obliterates any of the oppression the two characters faced due to their identities. Which leads me to my next issue: HYDRA’s identity as a prejudiced Neo-Nazi organization is completely sanitized in the movies as if the producers are worried about offending the anti-Semitic viewers!

It’s true that Red Skull wants to run things and does turn HYDRA into his own thing, but he is never not a Nazi, and HYDRA never abandons Nazi beliefs. If you watched the Captain America movies you would assume that HYDRA just wants to have totalitarian power and is in no way also interested in the extermination of whole groups of people. It’s as if the producers are worried about calling HYDRA Nazis, which is just so strange, especially since Nazis are a perfect villain since everyone hates them. You don’t as a writer have to explain why Nazis are evil, because everyone knows that they are. Did we learn nothing from Indiana Jones, guys!?

Basically, the whole thing seems really questionable: erasing Jewish characters, portraying the only Jewish-identified character as a violent madman, and sanitizing a Nazi organization all point to a problem of anti-Semitism in the Marvel movies. With anti-Semitism on the rise, it is incredibly dangerous to erase and portray Jewish identity this way. The whole thing disgusts me enough to make me seriously question seeing Marvel movies. Furthermore, the whole thing is disrespectful to Marvel’s very creators. Stanley Martin Lieber, also known as Stan “the Man” Lee, is also a Romanian-born Jewish man. Many other comic book artists and writers were also Jewish. It’s disrespectful to our whole comic book history! This is something we need to talk about and make a big issue out of; we cannot allow Marvel to continue portraying Jewish characters so poorly. At least if we had well-written, well-portrayed, and well-researched Jewish characters in our (internationally popular) Marvel movies, we could help stem anti-Semitism in our pop culture.