Here’s a not very secret confession about yours truly: I flippin’ love Scooby-Doo. While I adore it in pretty much all its iterations, there’s a special place in my heart for the animated Scooby Doo movies, like Scooby-Doo on Zombie Island, or Scooby-Doo and the Witch’s Ghost. These movies all have a pretty standard plot progression: 1) Mystery, Inc. starts investigating something that seems supernatural; 2) it turns out that the supernatural thing was just some peeps in masks, but 3) there is an actual supernatural thing that is much more powerful and scary than the pretend thing that the villains were masquerading as, and 4) Scoob and the gang have to figure out how to deal with that, too. While these plots are relatively predictable, I humbly submit that one ought not to mess too much with something that works. While it’s hard for me to pick a true favorite out of all these movies (cough Zombie Island cough) I distinctly remember adoring Scooby-Doo and the Alien Invaders as a kid. Did it stand up to my high youthful opinion of it? 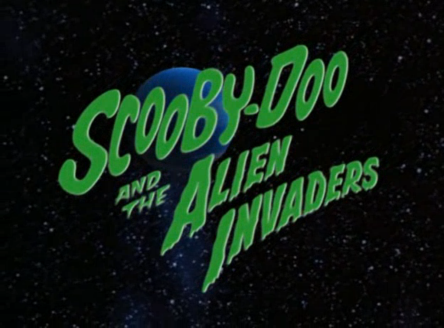 As you can guess from the plot formula above in combination with the title, Scooby-Doo and the Alien Invaders follows Mystery, Inc. to a desert town that’s apparently being troubled by, well, aliens. Townsfolk complain of mysterious lights, missing livestock, and even abductions, and since their van broke down outside of town, the gang has nothing better to do than to get to the bottom of it. Well, Fred, Velma, and Daphne, that is. Their first night in town, Scooby and Shaggy are abducted by the supposed aliens, and are discovered the next morning by a hippie nature photographer and her dog. Shag and Scoob spend most of the episode head over heels for Crystal and Amber, while the other three members of Mystery, Inc. hunt for clues.

Their paths reconverge out in the desert; Crystal, Amber, and their wannabe beaus are out looking at nature, and Velma et al have tracked the actual alien problem to the nearby SALF station, a government research center that hunts for alien life, like the real-life SETI does. The gang reunites in a cave by the station, where they discover that the SALF crew has been posing as aliens to scare people away while they mine for the metric fuckton of gold they’ve unearthed in in the station’s backyard. The villainous SALF crew finds them, though, and all seems lost—until Crystal and Amber reveal that they’re actually aliens, and use their nonhuman (and non-canine) strength to save the day. Once that’s taken care of, though, they’ve gotta leave—which means Shaggy and Scooby are left with broken hearts. 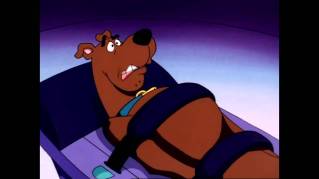 Watching this as an adult was sort of weird. First of all, since the story used the typical mythos of the Southwest U.S. alien abduction, there was a lot of very G-rated references to the really much more terrifying tropes endemic to these stories. Stolen livestock instead of cattle mutilation, a generically unhinged guy in town who claims to have been taken and experimented on, vague references to, er, invasive physical testing—all of these tropes would be familiar to an older watcher who knows how these stories work, and it was strange to see them introduced in such a kid-friendly way.

The real weirdness of rewatching this, though, was the love plot. Holy heteronormativity, Batman. Shaggy and Scooby meet a pretty hippie girl who has a girl dog, so they’ve gotta fall in love! Shaggy immediately imagines them getting married and having children and is so into thinking about the girl he just met that he forgets to tell his friends that he was abducted by aliens the night before, holy shit. He and Scoob are so lovesick that they don’t even want to eat food (!!), and their feelings kind of turn them dated-ly chivalrous, as Shaggy constantly insists that he has to protect Crystal and even at one point tells her to step aside, “this is man’s work”. Maybe I missed out on something, but if both Shaggy and Crystal are sixties-obsessed, wasn’t there this little thing called the feminist movement getting some big press around then? You’d think the writers would have remembered that little tidbit, but the situational irony of having Shaggy and Scooby try to protect Crystal and Amber and then end up being defended by them is way better.

And while Scooby-Doo anything almost always has a musical sequence (usually during a chase scene), this one actually has a weird in-character musical number, in which Shaggy sings a kind of awful song about how much he’s in love with Crystal.

The movie isn’t half bad in terms of racial representation—while Mystery, Inc.’s human component is all white, the speaking characters from the town, both good and evil, are pretty evenly mixed between white, Black, Latin@, and Native American—hell, they may be the bad guys, but the SALF team is made up of one white guy, one Black guy, and a Latina lady. Take that, stereotypical representation of people in STEM careers. And there are plenty of ladies, both in major roles and minor ones, from Crystal to the lady cop who takes in the SALF folks at the end of the movie. They even get a dig in at gender stereotyping—the Native American guy is the town’s mechanic, and he’s kind of big and scary—but his hobby is pressing flowers. He just doesn’t tell people so they don’t think he’s a softie and try to haggle his prices down.

The one thing I got the biggest kick out of throughout the whole movie, though, is the reason Crystal seems like such a perfect match for Shaggy. She dresses and speaks like someone from the late sixties—because the radio signals her alien civilization picked up, the reason they sent her to Earth, were sent out in the late sixties. They might be able to travel at faster-than-light speeds and use super high-tech pendants to go undercover, but they didn’t account for how fast cultural trends would come and go on the planet they were visiting.

We come to the end, and I must deliver a verdict to you, dear readers. Would I recommend this movie to you now that I’ve watched it with the weary eyes of the all-grown-up? 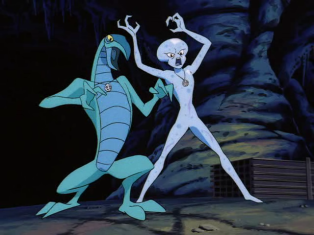 …Meh. If you’re a die-hard Scooby-Doo fan, you’ll probably like it. The humor’s pretty well written for this sort of straight-to-video movie—there are a lot of snarky, self-aware jokes, but they don’t detract from the story—and the animation isn’t terrible. I loved it as a kid because I thought that Crystal was the coolest most awesome alien lady ever—I distinctly remember drawing a detailed picture of her as a refrigerator art gift to a family member—but her character is… not very developed. She’s sent to Earth… why? To make contact? Why doesn’t she stick around, then? She’s stronger and more advanced than any of the human characters, so that’s cool, but she doesn’t have much of a personality. (Current me does dig that her alien character design isn’t weirdly gendered, though.) But without that starry-eyed adoration of my cool alien fave, I feel like I need to bump this one down a few spots in my personal Scooby-Doo media rankings. It’s still a far cry above anything containing Scrappy Doo, but it’s not really much to write home about, either.

3 thoughts on “Throwback Thursdays: Scooby-Doo and the Alien Invaders”