When you were a kid, what cartoons did you watch after school or on Saturday mornings? If you were like me, you watched Digimon (or Card Captor Sakura, but I’ll save that for another Thursday). The 1999 cartoon was the first anime I ever watched, and to this day, it remains a nostalgic favorite. With a sequel/reboot, Digimon Adventure Tri, coming out soon, I wanted to share what I liked so much about the show’s first season, Digimon Adventure.

Quick note here: in this post I’ll be using the people/places/Digimon names from the English adaptation, because that’s what most of our audience is undoubtedly familiar with. I have watched both the dub and sub versions and enjoy both!

Digimon Adventure starts when a bunch of elementary school kids at a summer camp, who are later known as the DigiDestined, are sucked into an alternate world known as the DigiWorld, or digital world. It’s soon revealed to be a world made from digital data that’s inhabited by Digimon, or digital monsters. Each kid has a Digimon partner, and together, they go on a brilliant adventure—one in which they learn about their own virtues and vices, strengths and weaknesses, and emerge better people for it. Oh, and they save both the digital and real worlds from being destroyed by evil Digimon. Not bad for a summer vacation.

It’s almost impossible for me to look at Digimon with any kind of objectivity, given that I watched it at a young impressionable age and have rewatched it regularly ever since. If the premise seems like a very 90’s understanding of computers and the internet, well, that’s because it is. Aside from that, though, Digimon Adventure capitalizes on the trend of having an animal (or animal-like) companion brilliantly. What’s better than having a pet to cuddle with? Having a pet that can talk to you and defend you from monsters. And Digimon partners are much more than Pokémon who only level up by battling others—Digimon evolve (well, digivolve) based on the strength of and the connection with their human partners. Many times it’s only after the human partner learns something about themselves—whether it’s the value of inquisitiveness, the strength of true friendship, or the bravery in being sincere—that the Digimon can digivolve.

Many children’s stories talk about characters going from the world we know to another world—Harry Potter, Chronicles of Narnia—but they rarely talk about how the characters act once they return to the “real” world. Harry has to escape from the Dursleys at the start of every book, but the series doesn’t handle how he interacts with the Muggle world past that, or if he even wants to. The Pevensies spend a lifetime in Narnia and return adults in children’s bodies, but once they’re back, C.S. Lewis only gives us a couple paragraphs of what they do in the real world. Like Narnia, time works differently in the Digital World, but unlike Narnia, the writers of Digimon really show the interaction between the two worlds well. When the kids first return from the Digital World, we get to see them reuniting with their confused parents, who believe their kids have only been away for half a day, at most. Furthermore, the kids’ Digimon have come back with them, which makes for some playful reverse culture shock as the Digimon struggle to adapt to a non-Digital world. More importantly, in the course of saving the real world, the parents eventually figure out what’s going on—and instead of protesting, they believe in their kids and help them out however they can, whether that’s driving their kids into danger, rounding up other bystanders, or just being emotional support. The parents and the real world don’t take away from the story at all; in fact, they lend an air of realism to a rather fantastical plot. 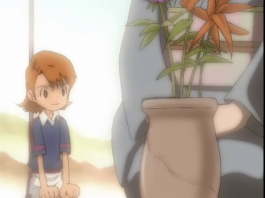 One thing I thought was particularly cool was how the story, rather than focus on romance or solely adventure, really took the time to develop each character and help them to become better people. It wasn’t until I was older that I realized some of these character arcs had been pretty Japanese in nature. Sora, for example, was a bit of a tomboy who joined the girls’ (and later the boys’) soccer teams at school, much to her mom’s displeasure. Sora’s mother was a very conservative woman who dressed in kimono and ran an ikebana school. The clashes between the two of them formed a large part of Sora’s character arc, as she learned to see from her mother’s point of view while not giving up her own interests. And Izzy, well, he was adopted—I distinctly remember thinking, the first time I watched this, that I didn’t understand why it was such a big deal. I knew people who were adopted and it wasn’t a big secret. It wasn’t until later that I learned the prevalent attitude in Japan toward adoptions. Spoiler alert: they’re not fond of them. So for a first anime, Digimon wasn’t bad at all: beyond all the saving-the-world stuff, it had a quiet focus on Japanese values that was both impressive and educational.

Joe was terrified of Japanese cram schools—a totally rational fear that everyone should share.

Speaking of Sora, let’s talk about the ladies of Digimon. Though they were well-written, in the final battles, the girls often unfortunately found themselves weaker than the guys. Matt and Tai, the group’s definite leaders, could digivolve their Digimon to higher levels than the rest of the group, and in many of the big battles it’s Matt and Tai who take on the main villains. Having said that, though, Sora, Mimi, and Kari are great characters and the prominent character arcs they’re given really move the plot along. One of the main story arcs revolved around the children finding their Crests, devices that would give their Digimon the power to digivolve into much more powerful forms. Sora’s Crest is the Crest of Love (Compassion), but thanks to Sora’s difficult relationship with her mother, she’s convinced that she doesn’t know how to love anyone enough to utilize her Crest. However, she spends the next couple episodes saving many of the characters from making poor decisions and helping them through using their own Crests. Finally, when she’s holding her Digimon back from fighting out of fear that her partner will get hurt, does she understand her mom’s hesitance to let her play a sport where she’d get hurt. She manages to use the Crest of Love and save the group.

Sora and Mimi, at first, seem like the usual clichéd girls: Sora is the tomboy and Mimi is the vain, pretty one. And at first glance, Mimi does seem like the flighty cheerleader stereotype, but that’s not true at all. Mimi is an only child and has been spoiled and pampered by her parents, and she doesn’t know how to react when things don’t go her way. In the Digital World, she’s surrounded by kids who don’t think she’s their primary concern, and she encounters Digimon she thinks are “disgusting” and who act “vile”. But through her partnership with her Digimon, Mimi reveals herself to be a warmhearted, sincere person who truly cares about others and will put herself in danger to protect them, no matter how dirty she gets doing it. 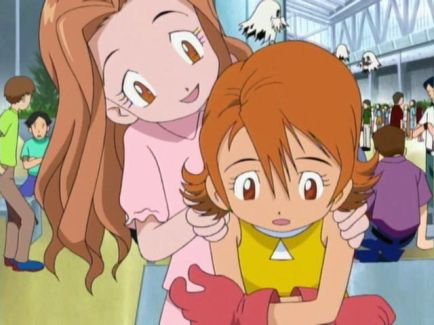 Out of the girls, Kari probably gets the biggest plotline: the main antagonist of the series, Myotismon, travels back to the real world to find the eighth DigiDestined and kill them before they can unite with our merry band of protagonists. This eighth child turns out to be Kari, Tai’s little sister. Despite her young age, she doesn’t just wait around while the other children and the villains search for her; she realizes she is the eighth child and turns herself in to stop Myotismon from hurting anyone else. Her Digimon partner, Gatomon, is fascinating as well—she was captured by Myotismon at a young age and brainwashed into believing that he was a good guy. However, when she has a chance to kill Kari, she doesn’t—instead, she fights off her conditioning and allies with the children to defeat Myotismon once and for all.

For me, at least, Digimon is one of those shows that just speaks to that buried little spark of exploration in everyone. Do you want to go to another world and have adventures? Do you want to bring that adventure home, at least for a time? Then this is the show for you. We’re not sure when exactly Digimon Adventure Tri will be set in the Digimon continuity—in high school, but ignoring the epilogue?—but I’ll be excited to see if they can manage to speak to that same spark that the original series did. With high school protagonists, will they fall into the trap of romance in the place of actual character development? Will they be able to say anything new about the Digital World? Will my ship finally become canon? (No.) I guess we’ll find out—and if it’s not everything we dreamed of, we’ll always have the original series to come back to.