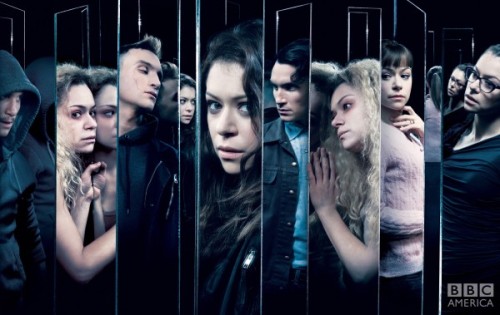 Was it just me, or was this episode of Orphan Black… a little bit predictable? For a show that’s been plotty and suspenseful from the very beginning of the very first episode, an episode like “Formalized, Complex, and Costly” was an unwelcome change of pace. Alison continues to be shunted away from the plot in favor of her new drug-dealing/politics business, and what we’re left with, unfortunately, also seems a bit boring. Spoilers after the jump.

The episode starts with Sarah and Felix dumping Seth, the dead mustachioed clone from the previous episode, into Felix’s bathtub, which can’t be a good place to put him. Art barges in almost immediately after that, and he’s reluctantly initiated into Clone Club. Hard to believe that he hadn’t put all the pieces together before this, but then again, who looks at the three identical women Art has met (Sarah, Beth, and Alison) and thinks “yep, must be clones”? And it’s about time he found out, anyway. He and Sarah head off to see what people know about the Proletheans, as Art says he has a lead on Mark.

Mark and Gracie, meanwhile, have been pretty busy. Mark doesn’t tell Gracie he’s also a clone, but he does say that Gracie’s father Henrik hid “valuable scientific material” from him on a farm, and he needs to get it back. Gracie thinks that since she and Mark are married now, she should help out, and in a great scene, tiny Gracie goes to the farm and intimidates a much older and stronger friend of her father’s into giving up the box he was holding for Henrik. However, when she gets back to the hotel where she and Mark are staying and break into the box, there’s nothing in it but papers. And things get worse for them from there. When Mark goes back to the farm to see if there was anything that Gracie missed, Sarah finds Gracie and tells her that Mark is a clone. Gracie, disgusted, packs her things and leaves the hotel with her mother. And shockingly enough, Gracie’s mother also goes to the farm—to kill Mark. We don’t see the death on screen, but since Mark was defenseless and Gracie’s mother was shooting at point-blank range, he’s probably dead.

While the plot was as fast-moving as ever, I don’t think the revelations from this episode were as interesting as the writers clearly wanted them to be. First was Art’s relationship with Beth Childs. Although we were supposed to believe that Art was helping Sarah-as-Beth out of loyalty in the first and second seasons, it always seemed clear to me that Art had some more personal reasons for being involved in Beth’s life. And unfortunately, most of the male characters on the show seem to be motivated out of love for one or more of the clones. When we found out that Art had (possibly unrequitedly) been in love with Beth, it seemed both expected and disappointing. But I guess that’s a reason for Art to stick around and hopefully get a bigger role this season.

The other big revelation, of course, was the male clones’ relation to the female clones. As Cosima and Scott examine Seth’s brain and genetics, Scott finds out that Seth had something like Creutzfeldt-Jakob disease and Cosima finds out that the male clones are, biologically, the brothers of the female clones. Just from reading Stinekey’s reviews, I had figured that the clones were probably biologically related in some way—why call them Project Leda and Project Castor, otherwise? At least now that Cosima has more genetic material to work with, she and Scott may find more clues about the original genome and about a cure for both male and female clones.

My absolute favorite thing about this episode, though, was seeing Helena’s interactions with Rudy and Rudy’s interactions with everyone on his military base. We finally learn that Paul is in charge of all field ops, but the clones’ “mother”, Virginia Coady, is in charge of the program, and it’s abundantly clear that no one cares about or respects Paul. I hope that comes to a head sometime soon, because seeing expressionless Paul in a fight with the overly expression-ed Rudy is going to be hilarious. And I look forward to learning more about Virginia Coady’s relationship with the male clones—could it be that we finally have a case of a female person/group of people in charge of a male group of people? I definitely want to see more of this.

The one thing I think we’ll see a lot of in future episodes is the idea of family, or, at least, Sarah’s take on family. We got to see Sarah struggle with the idea that she was a clone, and then, the idea that the other clones were her sisters. Now it’s clear that she thinks of Alison and Cosima and Helena as her sisters for real. Are we going to see the same progression with the male clones? And will all the female clones be as accepting of them? I guess we’ll find out.