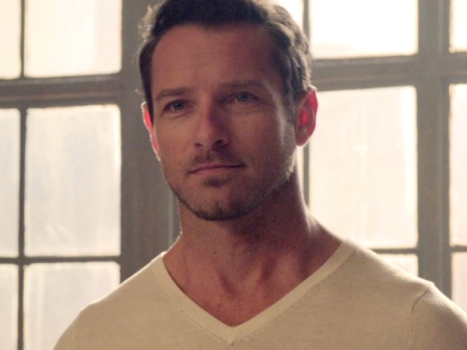 In order for you to understand how amazing this Teen Wolf fanfic is, you must first understand one thing about me: I hate Peter Hale. Hate him. Cannot stand him. Admittedly he is a decent villain, and the actor is exceedingly attractive, but Peter has killed far too many of my favorite female characters for me to like him. And he always tries to murder my precious Disney prince Scott. But more than anything, I hate the creeper vibe that Peter gives off. Unlike Kate Argent, Peter Hale, to my knowledge, has never actually sexually assaulted anyone on the show (though mind raping Lydia is arguably just as bad). There are some scenes were we could infer that he does or almost did, but it never actually happens. But Peter is capable of murder, so it’s not hard to imagine that he could sexually assault someone too. Especially when he acts like the creepy old dude in a bar that mostly caters to people who are twenty-one and under. So I tend not to like Peter Hale. In fact, I may have often called for his death when reviewing the previous season.

Peter is usually paired up with Chris Argent in fanfiction, but also Lydia Martin and even Stiles. Yep, Stiles and Peter have enough snarky interactions and both have enough of a grey morality that I can see why the fandom would find them compatible, but it’s not something I would ever read. Nope…

So now you know I hate Peter Hale, certainly don’t enjoy reading canon-Peter stories, and would never read a Peter Hale/Stiles fic, and even if I did, I would never enjoy such a fic, right? Whelp, I was wrong on basically all counts. So here I am reccing Devil of Mercy by KouriArashi, an AU Stiles/Peter fanfic where everyone remains completely in character. It was awesome!

Devil of Mercy by KouriArashi, at first, was not something I wanted to read as the summary came off sounding particularly dark; it is, but not as much as I was expecting.

The basic premise is this: Peter recovers from his coma in much the same way as he does in the show, but he never bites Scott and actually gets his revenge on the Argents. (There is no mention of Allison and Chris in the fic, so I choose to believe they just weren’t around for that.) Peter then pretty much leaves Beacon Hills in the dust after that, content to live his life. However, Beacon Hills doesn’t escape supernatural problems after Peter leaves. Derek eventually shows up, somehow an alpha though it’s never stated how, and the general events of Season 3 unfold with a few changes. Jennifer manages to kidnap Melissa McCall and Sheriff Stilinski, but before she can find a third sacrifice she is killed by Deucalion. Eventually, Melissa is found by the police wandering in the woods with no memory of what happened to her. Stiles’s father, however, is never found. This sets Stiles off on a path into the underbelly of the supernatural world in order to find his dad. Stiles lives on the streets and works as a prostitute, gathering information through any means to find his father. He is convinced if he gets close enough to Deucalion he can find out what happened to his dad. So he ends up in what is essentially a werewolf mating/marriage event, except Stiles isn’t there as a candidate. Rather he’s there as a prostitute to distract the werewolves who didn’t find a mate. And that’s where Peter finds him and claims Stiles as his mate.

He hunches over and looks up at Peter. “I’m looking for my father.”

“No. Not exactly.” Stiles swallows convulsively. “He disappeared three years ago. I’ve been looking for him ever since. He – he was kidnapped by a witch who was going to use him in a spell. She got killed by an alpha named Deucalion before she could do the spell, but my dad was never found. I thought, if I could get into werewolf society, if I could find Deucalion, he might know what had happened to him.” He swallows again, Adam’s apple bobbing up and down. “It’s taken me three years to get this far and you – you came along and ruined it by claiming me, you, an alpha without a pack, outside werewolf society. It wasn’t supposed to happen like that. I entered the omega room because omegas don’t get chosen as mates, but they sometimes get claimed as concubines. I thought that was my best way into a pack.”

Peter considers all this, and then nods. “Well, regardless of whether or not that was a brilliant plan – because it borders on suicidal, frankly – I have to admit I did cock it up for you. But if you agree not to go wandering off and damaging my reputation, I can help you ask a few questions about your father.”

Stiles looks suspicious at this. “Why?”

“Well, because you’re my mate, remember?” Peter says, with a toothy grin.

If anything, Stiles looks even more suspicious after that. “I did tell you that I’d heard of you, remember?”

Peter laughs at that, strangely amused by this teenager who knows who he is but isn’t afraid to mouth off to him.

This fic ends up taking the readers on an epic quest of intrigue into the werewolf hierarchy. Peter recognizes Stiles as his mate, almost instantly, and wants him to be happy, but Peter never strays out of character. Peter is still vicious, manipulative, and cunning, and Stiles is portrayed much the same way, especially after everything he went through. The main difference is sympathy. Where Peter recognizes someone is in a shitty situation, he feels no desire to help because nobody helped him when he was hurt. Stiles, on the other hand, wants to help people, so Peter often ends up helping him. He views helping Stiles as an investment. He cares about Stiles and wants him to be happy. Together they make a pretty excellent and somewhat terrifying team.

What I like most about this fic, though, is that there is very clear consent and discussion of

rape culture throughout the story. Peter claims Stiles, but never tries to touch him or even kiss him without Stiles’s go ahead. He slowly builds Stiles up and helps him regain his agency. At one point in the fic Peter actually explains rape and coerced consent to Stiles. And this is all from a Peter who is still very much in character. This really just proves to me that his character in the show could be much better written. Because of this, the relationship and build up between Stiles and Peter comes off as extremely realistic.

The actual plot of the fic is also very well done. The world building that KouriArashi does for the werewolf packs and hierarchy is extremely interesting and well thought out. The pace of the fic is slow, but never tedious, allowing readers to slowly try to put all the pieces together to figure out what happened to Sheriff Stilinski. The reveal and climax of the fic I found to be utterly fantastic, but I don’t want to give anything away.

So whether or not you like Peter Hale or the Peter/Stiles pairing, I would still highly recommend Devil of Mercy. It’s an excellent read and I guarantee it will end up being one of your favorite Teen Wolf fanfics.