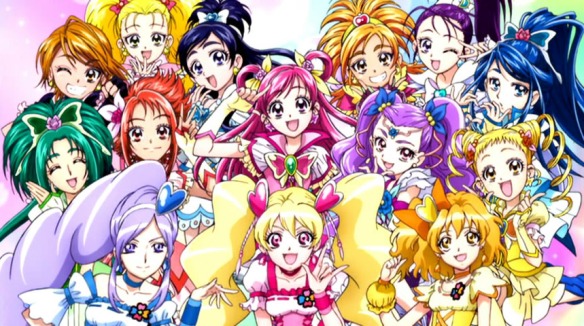 I’m going to go out on a limb here and say that most of you, dear readers, have seen a magical girl anime or read a magical girl manga. Or, if you haven’t, you’re at least somewhat familiar with the mechanics: say some words, use some object, then get cute clothes to fight crime with. Though there are some similarities to a portion of Western superheroes (ie: Wonder Woman, Superman) the fact remains that these magical teens are getting their powers, in most cases, from some otherworldly power or tech instead of Bruce Wayne-ing it or taking to the ol’ sewing machine. However, it’s not the costumes that interest me today. Instead, it’s what gives these magical teens their powers in a virtuous sense because, let’s face it, you’re probably not going to see a magical warrior with the powers of burning rage, even though that would be really cool.

Spoilers for Madoka Magica beneath the cut.

Though I haven’t experienced all the magical girl genre has to offer (and with new series coming out every year, it would be almost impossible to keep up at this point), there are some obvious crossover points between what virtues are extolled in our magical peacekeepers. While I’m sure there are some exceptions, most of these have to do with upholding the over-cherished aspect of purity. Usually this isn’t stated outright—what audience is going to really connect with purity when it’s so often presented as something that one must aspire to, and something that definitely isn’t used in a fight? Instead, aspects are taken from purity and divvied up between other aspects. For instance, in Sailor Moon, we have Sailor Mars’s burning, unwavering justice (symbolically things become purified after being submitted to flame). It’s not uncommon for other “nice” traits to be associated with magical teens in general: joy, compassion, music, and especially love! Love is always presented as pure since typically the protagonists are in school and dealing with crushes. This reaches its apex of power in Wedding Peach where the love and—unsurprising—wedding symbolism reach high levels: the girls even transforming into brides when they need to use their power. 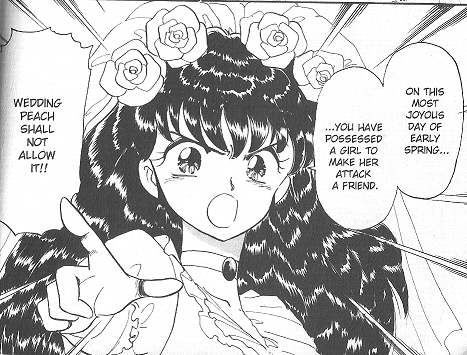 While generic traits that are easy to latch onto typically work, there are more obvious routes to go. In Saint Tail, Miemi only transforms into the titular Saint Tail when she hears the plight of the people around her from her friend who works in a confessional. And in Devil Hunter Youko, Youko loses her ability to use her magical powers when she loses her virginity. As such, to maintain her powers, she must keep her virginity—and for being a 90s anime directed towards an older audience (at least in America), it goes without saying that this was probably a path fraught with peril.

Boys aren’t exempt from these tropes either. Despite having much, much fewer magical series directed towards them—male leads usually go to the henshin category, with shows like Kamen Rider and Power Rangers—the transformations of magical girl genre boys still rely on love, for the most part. D.N.Angel’s protagonist only transforms when he gets strong romantic feelings for someone (though it’s definitely not something he has control over) and the boys of the new show Binan Koukou Chukyuu Bouei-bu Love! are even called “battle lovers”, referring more to the romantic, “pure” love rather than a passion for battle (even if Bouei-bu is done more tongue in cheek than most magical girl series).

Given all of this, why would it, then, be impossible to have a character who draws their power from less palatable traits? Well, because these traits are always considered evil, and thus go toward the enemy. Of course, it doesn’t exactly make sense to have someone saving the earth whose power is jealousy or pride given current storytelling conventions (though you can’t tell me that a magical girl based in wrath or revenge wouldn’t be sweet as hell). However, these high levels of expected purity have an effect on everyone: both the audience and the characters in the show. While not always discussed, these characters must feel an immense pressure to live up to these standards that have been thrown on them. They are, for all intents and purposes, both the protectors of the planet and the embodiment of whatever trait they ended up with. While in some cases it’s easy to say that they wouldn’t have been given the trait if they didn’t already have it within themselves, that doesn’t make the burden any less easy to bare. For example, in Sailor Moon during the “Death Busters” arc, the big bad sets out to gather pure hearts from unsuspecting people, leaving the affected as monsters until their pure heart is returned. Being the personification of love, Minako begins to worry when she hasn’t been targeted and starts going out of her way to do things that will make her more “pure”. Eventually she is targeted, but is more relieved and excited when her pure heart exits her body than worried. 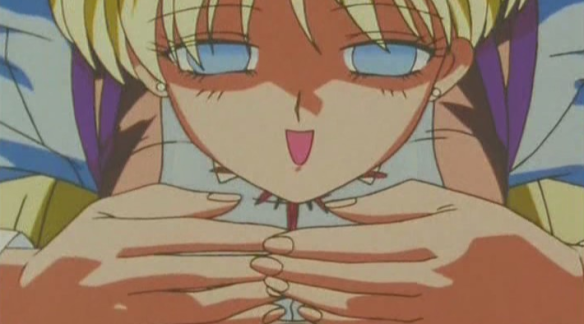 The largest example of the effects these standards have on magical teens comes from Puella Magi Madoka Magica. While this series differs in that they have the choice of becoming magical girls, their reasons for doing so are typically pure (wishes for happiness, peace, and so forth). So upon gaining their powers, they find out that eventually it’s their powers that are killing them: to protect their town, they must use their powers, but in turn using their powers too much and too recklessly will destroy the person using them. Sayaka, the one girl who wanted to become a magical girl to help her crush recover from an injury, starts out totally embracing the magical girl scene; however, after realizing that she isn’t strong enough and that people aren’t as appreciative or good as magical girl series makes out bystanders to be, she succumbs to the pressure of her own mortality and depression. However, she doesn’t die: her negative feelings turn her into a witch: a being of evil which the magical girls fight. Even though it’s a series that claims to subvert the magical girl genre, Madoka falls into them harder than many other series.

While lots of people find empowerment through magical girl series, this importance placed on purity is harmful to the characters, but more importantly harmful to the audience themselves. The protagonists are definitely shown as being muti-dimensional characters in most cases, relatable and flawed, but the fact remains that what gives them the most strength are these purity tropes. This in and of itself isn’t necessarily problematic—friendship, love, and justice are without a doubt valuable traits—but in creating such a stark dichotomy between “good feelings are good, and bad feelings are bad”, a stressful purity narrative is coming into play. We need magical teens who can utilize their quote-unquote unsavory traits for the good of the world too. Or have these purity traits not be presented as de facto “good”.

Honestly, I think series like Shugo Chara!  have the right idea. Its protagonist Amu has three, eventually four, methods to transform by, each displaying a separate aspect of her personality (ranging from more typical shoujo staples to things like being athletic and sharp), all of which she must learn to use and come to terms with to become the person she wants to be in life. This is what transformation should be encouraging: different aspects of one’s personality should be presented and utilized, none of which are “good” or “bad”, all of them having consequences. While this may present a less easy to tread narrative, I do think everyone can benefit from powers that are not so clearly steeped in dated ideals.

3 thoughts on “Magical Mondays: Purity and the Magical Girl Genre”