That title sure puts you on edge for this episode, doesn’t it? Well, it was a good warning, because this episode was one of the most suspenseful ones to date. Alison got a starring role, we find out more about the clones’ secrets, and we re-emphasized the importance of family, especially when it’s your clone family. Spoilers after the jump!

Much of this episode centered around Alison, for once. I was talking with Stinekey and Saika about how Alison’s current plotline is unfair to her—at least in Season 2, Alison’s rehab story grew organically out of the clone plotline, as she only landed there after being continuously gaslighted by her monitor husband, and her actions while in rehab led to Donnie accidentally taking care of Dr. Leekie. This season, she’s been stuck in her own crime procedural without any signs of our main plot reaching her, despite the fact that someone with Alison’s drive and ruthless determination could, just maybe, be pretty useful help against Project Castor? Maybe? 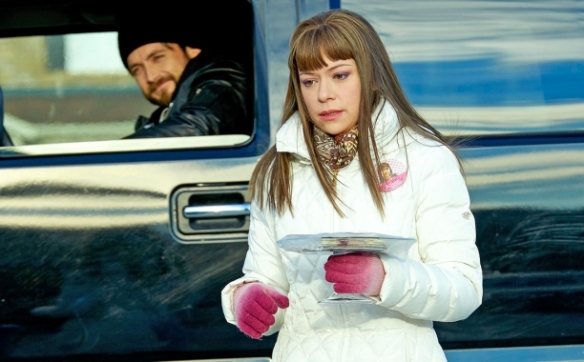 Now I really want an AU where Sarah, Alison, and Cosima run their own drug business. Cal and Jason can help. Helena, obviously, would be their enforcer. Please, AO3?

Anyway, this episode, Alison is trying to hand off her drug money to Jason’s supplier while also campaigning for school trustee. She’s mostly hindered by Donnie, who’s too concerned with showing Jason that Alison is married to him to actually do his job right. He gives Jason’s supplier an envelope of Alison’s school trustee stuff, while Alison arrives at the high school where they’re holding school trustee nominations and gives the organizers an envelope full of drug money. All Alison has to do is grab the envelope back, but she has to talk to her mother and Felix, who’s helping her run her campaign, is telling her that she has to go get her pictures taken and give her speech. It’s like she has to be in two places at once—and fortunately, that’s something Alison can do. Cosima takes her place in front of the camera while Alison confronts her mother.

It turns out that Mrs. Hendrix doesn’t want to sell her store to Alison because she doesn’t think much of Donnie (join the club!) and doesn’t think much of what Alison’s done with her life. She reveals that when she and her husband were trying to conceive Alison in-vitro, she told the doctors that she basically wanted a designer baby—because, as she told Alison, she “just wanted the best for her”. Alison tells her mother that nothing was ever good enough for her: not Alison, not Alison’s father, and not Donnie either. But Jason’s been talking to Mrs. Hendrix, and now she tells Alison that she’ll sell her store because she knows that Alison, not Donnie, will be in charge, and she implies that Alison will soon want to leave Donnie for Jason and she’s totally on board with that. 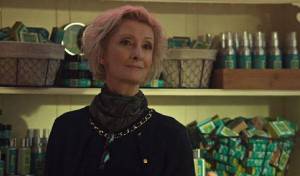 There’s a lot of really interesting things about Alison’s character in this episode. The show makes a strong push for nurture over nature by introducing Alison’s mother, who’s every bit as organized and as critical as Alison, and it’s the first time we’ve ever seen Alison really rattled this season: she certainly wasn’t as nervous when meeting Jason the drug dealer. Then again, Alison and Jason the drug dealer seem to have some insane chemistry—when Jason kisses Cosima-as-Alison, Alison doesn’t seem surprised at all. Rather, she seems a little regretful that she wasn’t on the receiving end of that kiss. I’ve never really been a big fan of Donnie—I don’t see what Alison sees in him at all—so if the writers want to go this direction, I’m all for it. However, although the show hasn’t really told us why Alison and Donnie are together, they’ve continuously shown us the two of them acting as a team in everything from hosting parties to burying Leekie in their garage. It remains to be seen if Alison will really take this next step. (It’s not gonna stop me from daydreaming about what a Donnie-free Alison could do, though.)

After Alison saves Cosima from a truly terrible speech, she drops the cue cards she had prepared and, in defiance of her mother, gives a great speech on the importance of family. It works for Alison, whose campaign promise is that she won’t redistrict the students who currently attend their school; but it also works as the overarching theme of the episode. Sarah and Helena make their peace with Mrs. S, who echoes the Proletheans in telling Helena that she’s with family now; Alison tells Cosima that even if Delphine is acting suspiciously, she should still take care of herself and not cheat on her medical exams. (Cosima was at Alison’s event to get a urine sample from Alison, hoping to do just that.) In a Castor-free episode, the reminder of family was a welcome return to Orphan Black’s all-female-clone roots, and it’ll hopefully inform our final three episodes.

The clones’ mysterious illness took a backseat in this episode, but what we found out was still very important. As we saw last episode, it seems like Rachel knows the code that Ethan Duncan used to hide his research on the clones, and Scott confirms it this episode when Delphine brings Rachel to his lab. He and Rachel manage to convince Delphine that Rachel is really interested in learning about Donnie’s Settlers of Catan-esque game, and when the two of them are alone together, she shows Donnie that she knows the code. However, she says she’ll only talk about it with Sarah. I don’t know how Rachel knows that Sarah is even alive, but I liked Scott and Rachel’s interactions a lot here: Rachel finally has a bargaining chip, and Scott is finally fed up with Cosima’s shenanigans and is growing a spine. It should be an interesting dynamic going forward, especially if Cosima is getting sicker again.

We only have a few eps to go until the finale, so let me talk about Delphine real quick! Delphine’s been in a precious few episodes this season, which means we have very little to go on in regards to her motivations, but I’m still a little suspicious of her. She told Cosima that she had to break up with her in order to protect all the clones (not just Cosima), but since then, we haven’t gotten anything from her point of view or any scenes that would shed some light on what she’s doing to protect the clones. So… is that what she’s doing? Or has this all been one big power grab for Delphine? When we first meet her in Season 1, she tells Cosima that she’s never slept with a woman and she’s in some sort of sexual-and/or-romantic relationship with Leekie that’s never brought up again; later, the show really tries to sell us on the Cophine relationship, despite the fact that they never again address Delphine’s sexuality. Then the writers abruptly break them up at the start of Season 3 and ever since then Delphine’s been stalking Cosima, when she’s not busy being head Dyad honcho now that she’s overthrown Rachel. Did she only use Cosima to get closer to the Leda project? I guess we’ll find out…

The preview for next episode looks amazing, because as much as I want to see Helena with Sarah (and Gracie!) and working on being a family together, the humor inherent in Helena meeting Donnie is not something I want to pass up. See you next episode!