At long last, after a five-month wait (they’re certainly taking their time with this series), The Sandman: Overture #5 has arrived! Despite this being the penultimate issue in this six-part prequel, this issue again brings up more questions than it answers (Author Neil Gaiman really needs to stop doing that. He’s running out of time!). We—Syng and Mikely—are reviewing it jointly again. Join us for spoilers, summary, and analysis after the break, as we delve into darkness with Dream!

Syng: Things seemed pretty hopeless at the end of the last installment of the Sandman prequel Overture, especially considering the fact that the mad star had killed off our character named Hope. Our “hero” Morpheus, a.k.a. Dream, was imprisoned in a black hole, while the stars worked to end the universe early so they could go out in a blaze of glory. (And let’s not forget that this was all Dream’s fault in the first place because he failed to kill a dream vortex before her powers caused her sun to go mad.)

Well, in this issue, we found out that the joke’s on the stars, because a black hole is precisely where Dream needs to go in order to visit his mother. Turns out I was wrong in my prediction, folks—the mother of the Endless is not Space, as I had thought would be a fitting consort for Father Time. She is, in fact, Night. And black holes are portals to her realm.

Mikely: I suppose we shouldn’t really have expected the protagonist to be locked away forever with two whole issues to go (and the rest of the series… prequels do cost you some of the suspense). While I had been promoting a whole Einstein thing last time around with Space and Time, I think I actually prefer Night. It’s a reminder that this isn’t science fiction or fantasy, exactly, but something closer to mythpunk. Space is just part of the inanimate universe, but Night is a social construct. The Endless stay on the right scale.

Syng: Dream and his mother talk over a meal. She’s pretty overbearing and contradictory—while she’s “disappointed” to see him and “doesn’t like to be disturbed”, she accuses Dream and most of his siblings of never coming to visit her. Morpheus brings up the fact that his father (whom, as you recall, he visited in the last issue) misses her. Night is dismayed, and then chides him for his romcom-ish plan to try to bring his estranged parents back together, just because one of his stories states that doing so will heal the mad stars and end the universe-destroying war. Night has no sympathy for the declining universe. She offers to make Morpheus a dream-realm right there in her own realm (including a companion for him that looks like an adult Hope), where he can rule without even being aware that the universe is dead. But, being Dream, he can’t possibly abandon his responsibilities, so he declines. Night’s response is to throw him back into the black hole.

Mikely: Okay, so I might have whiffed on Einstein, but I’m not letting early 20th century Nazi-exile Jewish scientists go so easy. This one’s for Dr. Freud. I mean, Dream and mother, who’s not only equipped with an overbearing personality, but is literally enormous on the page.

Plus, THIS on the menu?

Syng: Meanwhile, around the universe, war is tearing everything apart. But someone is traveling around spreading comfort and hope. And sometimes, taking people along with him. At last we find out it’s Cat-Dream, and he even went so far as to find Hope in the afterlife and ask her to come along. So… yay, Hope’s not dead anymore, I guess (this metaphor is a little overly obvious, but it’s saved by the fact that Hope’s character is awesome).

Mikely: Nobody gets away with subtle when they name a character Hope. But then one of the most beloved supporting characters here is Death herself, so maybe we can let Neil slide on that one. Or at least, if we made it this far.

Syng: Destiny, meanwhile, has encountered a ship in his realm that is not in his book. This is extremely unsettling, because everything is supposed to be in his book. So he summons Dream to him, because he can tell the ship belongs to Dream. Morpheus is annoyed at being “rescued” from the black hole (I guess we now know why no one tried to rescue him from Burgess’s prison either, at the beginning of the main Sandman series), but that’s not why Destiny summoned him. He shows his younger brother the ship. Dream has never seen it before, and yet he knows it’s his. He goes on-board and finds… his Cat-self, with all the lives from across the universe that Cat-Dream saved. And that’s where we leave off.

I confess I was a little disappointed with this issue. It seemed less exciting and interesting than the others. Less plot movement, I suppose, because I’m still not at all certain how the universe will be saved. Dream’s attempts have so far all been useless. Now Cat-Dream is doing a sort of reverse Noah’s ark thing, with an animal saving people on a ship. But I can’t imagine these 1000 rescued souls can repopulate the universe in time for everything to be back to normal by the time the main Sandman series begins. Unless this war simply hasn’t reached Earth yet? Maybe this is why we see so little of the rest of the universe in Sandman? Because most of the rest of it has been destroyed?

Mikely: You know, that’s really something that I hadn’t considered before. I’m kind of waiting for some big reset button at the end of this, and so, the giant, cataclysmic wars going on seem not to have really high stakes. But you’re right: the Earth is remarkably alone in the universe of Sandman. Dream has an amazing multiverse of realms, but he doesn’t get past Mars in this one.

Syng: I’m also surprised that the mother of the Endless is Night. I mean, that’s so depressing! I always thought it was kind of a bummer that the fundamental forces of the universe represented by the Endless were all embodiments of the kinds of things that are generally regarded as negative: Death, Despair, Destruction, Desire. The one positive one, Delight, transformed into the more negative Delirium once the universe got too messed up, and the two that could be seen as neutral, Destiny and Dream, are both pretty depressing broody dudes. Now I guess we know why. But it begs the question, why is this universe seemingly “ruled” (I say that loosely, as the Endless tend not to exert control outside of their realms) by children of darkness? Are there more positive equivalents of the Endless who are children of Day? Or is everything just doomed to succumb to Night in the fulness of Time? It’s a pretty hopeless outlook on the nature of the universe.

Mikely: Yeah, it’s a moody, broody comic much of the time. But it never quite manages to get me down, despite that. It’s not grimdark, though. Even if the Universe is kind of a morose place, it doesn’t bring me down like, say, Westeros does. If the Endless are the children of Night, then maybe that leaves humanity (or its multiversal equivalent) as the children of Day? They may be immortal—Night has a permanence Day lacks—but we’re the ones who get to really live.

Syng: …I actually really love that interpretation! As I argue elsewhere, Dream is actually very human in nature. Maybe, in this light, it makes sense that Dream is the only one of his siblings who still hopes to save the universe. Dreams and stories are the domain of hope. And in case we don’t get that point, we have an actual character named Hope who’s not dead after all. I’m surprised Cat-Dream went to her afterlife and was able to just leave with her. From what we know of the way the Sandman universe works, that’s a pretty huge violation of the rules. I hope it doesn’t backfire for Dream the way it did for Orpheus.

Mikely: I mean, maybe that’s what makes it work? Is dreaming the great hope (sorry) of Night? Death, Despair, Destruction, Delirium—all more potent at night, and scarier, too. Desire is of the night as well, and while not as negative as the others, doesn’t come off well in this series. Dreams are what we are offered.

Syng: Dreams are totally the best part of Night (or of sleeping, at least)!

The art (again helmed by J.H. Williams III) was top-notch as always. And I suppose this issue succeeded in making me think again, despite my disappointment, so I still think it was worth every penny. Check it out yourself, and let us know your thoughts in the comments! 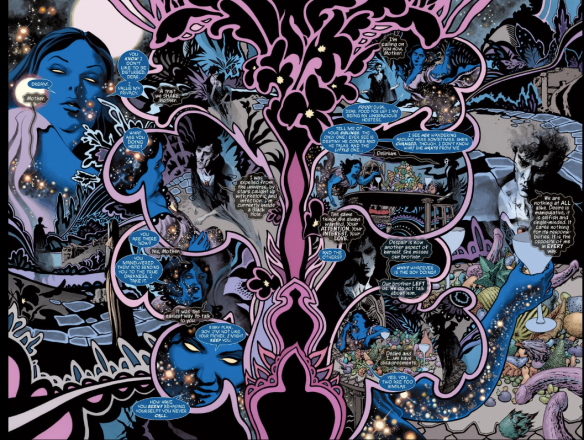 2 thoughts on “Nightfall: Syng and Mikely Review The Sandman: Overture #5”