Sex is an undeniable part of video games now. Arguably, it always has been (although we don’t talk about 1982’s Custer’s Revenge. Or I don’t). These days, it’s definitely a selling point for a game—see Bioware RPGs and The Witcher—and if not a selling point/something the player has control over, then it’s at least something that entices players to play when the protagonist gets down with their love interest. In this way, while sex is being portrayed, I wouldn’t exactly call it sex positivity. Recently, though, I came across a game that fulfills actual sex positivity by giving the player the full choice in their decisions when approaching a sexual encounter. None of that “if you choose not to have sex here, you lose the relationship” or “you can’t even skip this, so have fun boning lmao”. Today’s web crush approaches sexuality from the oft-overlooked aspect of consent, and I couldn’t be happier.

Note: while this post may not be NSFW, the game definitely is!

SugarScript’s game Cute Demon Crashers gives the players and its protagonist a safe space to explore various avenues of sexual relationships. Created for NaNoRenO 2015—a game jam that focuses on the visual novel engine, Ren’Py, and visual novel games in general—the game takes a short, but sweet, look at the two hectic days of the female protagonist’s spring break. Lamenting over being left home alone during the holiday, she feels that a fling would be something to keep the blues away while her friends are out with their significant others. However, the protagonist can’t do one night stands. Rather, she makes explicitly clear that she needs to have some sort of bond with the other person before she engages sexually with them. Cue the entrance of four demons (three incubi and one succubus) who are drawn to the protagonists side to make her happy. During the two days the demons have before the portal back to their world becomes active again, the protagonist gets to know them and can choose to have a sexual encounter with one of them, or just hang out. 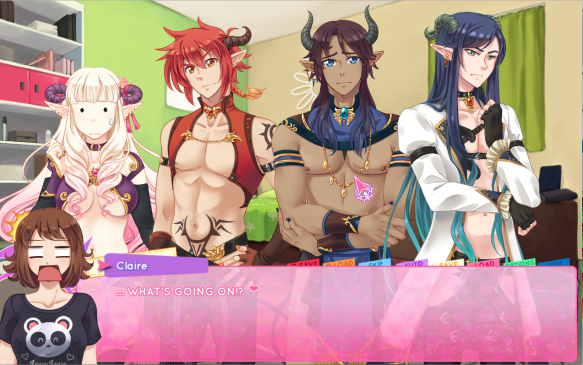 Left to right: Mirai, Akki, Kael, and Orias. They’re like the group of friends that just happen to be sex demons you never knew you wanted.

Unfortunately for me, only two of the four relationships have been completed, so I didn’t have enough material to write a full review. However, what’s there in the game is totally worth playing. I’m sure some of you, dear readers, are sharing the same worries that the protagonist had. Succubi? Incubi? How is this sex positive and not full of gross tropes? Kindly, once the demons show up and explain the situation, they also make completely certain that the protagonist knows that they are here for her benefit. This means that they are here to make her as comfortable as possible, which includes things like helping her with the chores and playing games, but more importantly being completely honest about everything (from their purpose in coming to their specific kinks) and giving her the option to say “no”. The player does not lose if they choose not to have sex. And even if the player does decide to have sex, at most any point during the sex scene, the player can still exit out if they feel uncomfortable. Best of all, no one is ever looked down upon or chided for stopping or saying no.

Luckily, SugarScript is still looking to complete Cute Demon Crashers, and with recent updates to their Tumblr, and with a projected release of the other routes happening sometime this month, I’m super excited to see that this project isn’t dead in the water. If this sounds like something you’re interested in, make sure to download what SugarScript has done here (again, NSFW). If you want to wait until everything is out, make sure to keep an eye on SugarScript’s Tumblr here!