Firefly has always been one of my favorite shows despite it being tragically canceled, and I think one of the main reasons I enjoyed the show so much is the wide diversity of belief we see with the cast. It’s rare that shows discuss belief, and it’s even rare that a show does it across a decently broad spectrum.

First and foremost, we have Shepherd Book, a Christian preacher we meet in the very first episode of Firefly. It’s through Shepherd Book that we get our main vessel to discuss religion. Book is obviously very devout in his faith, having taken up orders, and unlike many clergymen that you see in the media, Book is not actually a hypocrite about his faith, but truly believes in its principles. (Although Book does occasionally interpret doctrine to suit his own needs, such as claiming that the Bible is against killing but fuzzy when it comes to knee caps.) It’s through Book that we largely get an impression about how other members of the crew view religion.

We see that most of the crew doesn’t really have much of an opinion about religion, which in a lot of ways is actually a decent reflection of our own more secular society. Some of the crew seem to fall anywhere from not having any faith to not really caring about religion but having no problem with it, and some seem actively interested in Book and religion. Whether that means they are spiritual but not religious, or of Book’s faith but not actively practicing, or have no faith at all is not always clear, but we do get at least a sense of their beliefs from their interactions with Book.

Jayne seems more concerned about the restrictions religions puts on people, asking Book about his vow of chastity and often getting annoyed at Book’s moral judgement. River we see as very atheistic, logical, and science-minded when she attempts to fix flaws and inaccuracies that she sees in the Bible, though she later comes to an understanding with Book when she recognizes that certain illogical things in the Bible are more symbolic than anything else. We don’t ever see Simon having any issues with Book’s faith but he does come into conflict with religious fundamentalists who kidnap him and try to burn his sister as a witch. Simon’s beliefs are never really made clear. He is shown as having no problem with faith unless he thinks it making people act in a nonsensical way. Zoe and Wash also seem tolerant of faith and even seem to have some base knowledge of Christian morality, but otherwise never voice much opinion on the matter.

Then we have Malcolm Reynolds, who is one of the more interesting characters when it comes to faith. Mal seemed to be a devoted Christian during the war against the Alliance, but after being devastated over losing the war and seeing so many people he cared about die, he loses his faith and becomes actively hostile to religion. He insists on Book not praying at dinner, and actively tries to push and antagonize him because of his beliefs. Mal’s story is an interesting one because it seems his developing relationship with Book is supposed to reflect his attitude and thoughts about his former faith. He never seems to really reconcile or return to his faith, but we see as he grows more comfortable with Book that he starts to become more comfortable with other people still believing. Despite his lack of religious belief he still goes to Book for guidance and eventually becomes less hostile toward him.

Now we start getting into the problems when it comes to Firefly and diversity of belief. First, there is the fact that everything tends to be very vague in Firefly. While many assume Book is a Protestant Christian, no time is really given to specifically state what denomination of Christian Book really is. Because of this, while we can get a sense of his general Christian principles, we never know his specific beliefs. Joss Whedon in general portrays Christianity in very general terms, just like someone who is not a Christian, but knows the general basics of Christianity, would do. This isn’t surprising as Whedon is an atheist, but I think some more research would have greatly fleshed out the story. 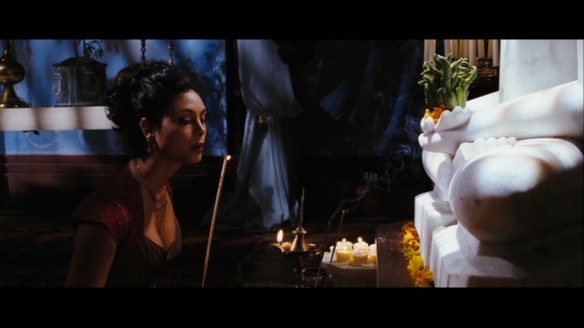 But then we get to my biggest issue, the very Western understanding of faith and the lack of representation of faiths other than Christianity. Inara is portrayed as a Buddhist, yet her Buddhist beliefs rarely come up or are even talked about. We see statues of Buddha in her shuttle and occasionally see her praying or meditating, but Inara does not get to facilitate profound discussions of religion in the same way that Book does. Occasionally she discusses faith with Book, but it is always in vague generalities and never anything specific to either Buddhism or Christianity. If Firefly’s Christianity is portrayed as written by someone with only a vague understanding of the faith from growing up in a Christian culture, then Buddhism is portrayed as if it were written by a Western person with no understanding of the faith. It doesn’t seem as if Whedon even attempted to do more research on it. It’s very clear that Joss Whedon only knows that Buddhism has some connection to Buddha and meditation. The portrayal of Inara’s Buddhism is extremely bland and hardly discussed, showing that despite the supposed Asian influences that are supposed to exist in the world of Firefly, the author himself has little understanding of any Asian cultures or belief systems. Especially if Buddhist beliefs are supposed to represent the more Chinese aspects of the Firefly world. While Buddhism still has some practitioners in China, overall, Chinese culture has been more influenced by Confucianism and Taoism. And many more Chinese people today actually are not religious.

In the end, while Whedon fails at portraying characters with broad spectrums of belief, at least he tries to show various stages and ways people practice and are influenced by faith, though most of it does come across as very vague and poorly researched. But Firefly especially fails at diversity when it comes to faiths other than Christianity, and in attempting to speak about religion in more than just generalities. However, I have at least always appreciated the attempt that the Firefly writers made to at least try discussing diversity of belief.

1 thought on “Oh, My Pop Culture Religion: Firefly and Diversity of Belief”