Don’t get me wrong, I love Adventure Time, but the last episodes of this past season were showing things I’d never think I’d see on Cartoon Network outside of Adult Swim. It’s exciting to see the network getting back to more serious animated shows (like the short series, Over The Garden Wall), but there are ratings for shows for a reason. I can’t tell if the writers are genuinely trying to make a more developed world with complex characters, or if they’re just twisting the story into whatever they desire. By the end of this season, I questioned whether this show meant to use depression as a joke, and how much of an element of horror they were willing (or were allowed) to use. 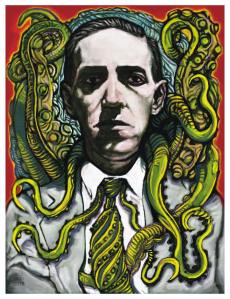 It gets pretty Lovecraftian…..

Having a seven-year-old sister, I have to be conscious of what’s okay for her to watch. I don’t think Adventure Time will be something she’ll be able to see without being terrified for a while. One of these reasons is the final episodes involving the lovable penguin Gunter. We find out that they’re an old space god, Orgalorg, who tried to take over the solar system a long time ago. Normally I’d love to see tributes to Lovecraft in shows, but this was darker than a small cameo of Cthulhu. Gunter gets their head split open, and their brains are oozing out. They start to have visions; the brain starts to act like a different entity from Gunter, and starts to controls them. When Gunter regains consciousness, they are clearly distraught, taking heaving breaths and sweating. Unfortunately, Orgalorg completely takes control of Gunter and tries to take over the solar system again by the finale. 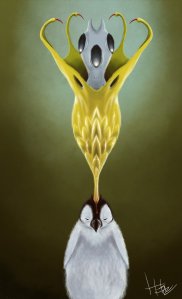 In the end Orgalorg plans on taking over the solar system just like before. He says, “It’s all yours if you’re willing to take it. Destroy worlds, crush anyone blocking the door. Feel their bones crumble and their goo spill out…” Finn’s able to defeat Orgalorg, but only after slicing him open, and he explodes into pieces. I generally enjoy creepy plots, but this gave me shivers. It’s one of the more violent and terrifying things that’s happened in Adventure Time. Obviously my sister doesn’t represent how millions of other children would react to the show, but she couldn’t even watch Frozen for months because the parents’ death scene upset her; there’s no way she could watch something like this. My sister would have nightmares for weeks, regardless of whether or not I was there to comfort her. Mind you, this show is rated PG for parental guidance (just like Frozen). That rating would have worked for the older seasons of the show, but the show caters more to teenagers and adults now than younger children.

Oddly enough the evil space god wasn’t what horrified me the most this season. Instead it was an episode about LSP, or Lumpy Space Princess. She’s not the most giving person of the series, but in the episode “Be Sweet“, she has to take care of Tree Trunk’s child, Sweet Pea. Since LSP has been living in the woods, she takes the time to indulge in simple comforts, like a bath. LSP leaves Sweet Pea alone and he gets lost trying to find someone to tuck him into bed. To my surprise, when LSP finds him, she realizes how upset he is and takes the time to “put him to bed properly” with a lullaby and kisses. She takes him home, but because she destroyed the house when she was supposed to be watching Sweet Pea, Tree Trunks shoos her out of the house to live in the woods again.

The depressing part is how often LSP is being chased by a rabid raccoon throughout the episode. It keeps telling her she’s garbage, a savage animal who doesn’t deserve to live nicely. The episode ends with the raccoon holding out a piece of food, LSP gliding over to it and crying as she eats. One of the only times LSP learns to care for others and tries to live a normal life again, she’s told she’s not good enough and is thrown back into the woods. I understand Adventure Time isn’t a “lesson of the day” kind of show, but what kind of message does that leave people with? How someone can learn from their mistakes but still be treated like dirt anyway? The most twisted part of it all is that she may have been hallucinating what the raccoon was telling her. The lip-syncing from the raccoon doesn’t match what it’s saying; rather, its mouth opens and shuts much like an animatronic. It’s hard to tell if this was just to make the raccoon look scarier, or if LSP is projecting self-loathing thoughts through the raccoon. If that’s the case, it shows a very unhealthy way of dealing with depression, and makes it seem like it’s not a serious problem.

As cool as a polyamorous relationship would be on Adventure Time, this seems more sexual than I’d expect…. GIF from tumblr

What’s funny to me is that they were more respectful with the fandom when they were making fun of shippers. In the episode All the Little People, Finn is given miniature living figures of many characters in Adventure Time, and starts pairing them together in different non-canon friendships/relationships. The episode shows how obsessed people can get with shipping, and it goes over the top when Finn messes with these dolls for several months straight. Finn starts abusing the situation by pairing himself with different princesses as he watches them fight over him. He even pairs himself with and then breaks up with Lady Rainicorn, making Jake upset. After eighteen weeks Jake checks in on Finn and tells him that he shouldn’t interfere with other people’s lives and that he should explain himself to them. He does explain himself briefly to the figures and suggests they forget everything and have a dance party. How things are solved is a bit ridiculous, but Jake does call out Finn on how manipulative he’s being. It doesn’t paint people who ship as crazy, but it does suggests that it’s not a good idea to use all your free time on it.

Again, I love Adventure Time, and I can’t wait to see what they do next, but I’d be lying if I said I wasn’t wary about what direction the show will be taking. Especially after the LSP episode, I hope either the rating goes up, or the writers are more careful about what kind of messages they’re sharing with their audience.

Have any opinions on television ratings or the newest season of Adventure Time? Feel free to leave a comment below!

2 thoughts on “Is Adventure Time Getting Too Reckless with Their Episodes?”