Well, originally, this was not the Throwback I had planned for today, but after watching Jurassic World, I’ve found my interest in dinosaurs reinvigorated. And what better way to get my Jurassic Park kicks off than by building a park of my own filled with dinosaurs? Unfortunately, I can’t find my copy of Zoo Tycoon, and even if I could, it wouldn’t run on my current computer anyway. GOG also does not sell it, for some reason. So it looks like I’ll just have to go without for once. (My life is hard.)

When I was younger I used to play Zoo Tycoon daily, and I had both expansion packs, which meant that I could build my own Jurassic Park. And then, once my park had a significant amount of tourists, a fully grown T. rex, and a dozen velociraptors, like any responsible park owner, I deleted all my fences and allowed my dinosaurs to eat everyone.

Also, if you build a ditch around the park entrance, no one can escape.

The original point of Zoo Tycoon sadly isn’t about feeding a bunch of NPCs to carnivorous creatures. It is actually about running a zoo smoothly, whether that zoo has extant or extinct animals. Or even mythological ones. You can make a unicorn exhibit. You can play a freeform game where you built a zoo however you want, or you can play the scenarios the game provides, wherein you build a zoo up to reach a certain criteria before advancing to the next level.

I always played a freeform game with cheat codes so I never had to worry about finances, and my biggest grievance was that there is no single map large enough to have an exhibit for every animal, unless all the exhibits were really small. For those of you who have played this game, you know you can’t get away with small exhibits; otherwise you’ll have unhappy animals. 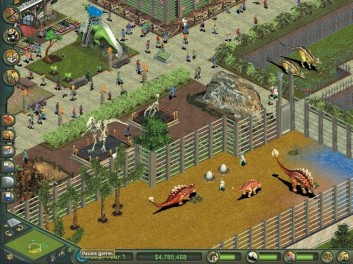 The animals in this game were incredibly finicky. They would be unhappy if everything in their exhibits weren’t either perfect or near perfect. For every exhibit, you had to have the right amount of rocks, trees, including the types of trees, and terrain. You also had to constantly do maintenance on the exhibit fences, or the animals would escape (which is a problem if you’re actually trying to run a successful zoo). And you had to make sure you had the right kind of fences too. Monkeys can climb over chain-link fences, but not through the iron bars. The elephants can run through just about everything but a solid wall. And the dinosaurs had to have either electrified fences or concrete.

I always had trouble raising T. rexes because of these things. They always wanted a certain kind of tree for their exhibit, but they were so big that they would trample any trees I gave them and turn them into rubble. Then, the guests would get pissed at me because the T-rex exhibit had too much rubble and not enough trees, so the animals were unhappy. Eventually, I just stopped buying T-rexes and stuck to velociraptors.

And there really wasn’t a whole lot else to this game than that. It did have a lot of educational value. You learn pretty quickly what kind of environment animals live in in the wild through what kind of terrain and what kind of foliage they like in their exhibits. The game also provides you with informative excerpts about the animals your zoo can feature, and it also calls attention to endangered species and informs players about the situation.

I’m really sad that I can’t find a way to play this game anymore, because I really loved Zoo Tycoon growing up. It was just a fun experience to have, and hey, who doesn’t like building their own Jurassic Park?