This year’s finale felt a little more toned-down than the finales of seasons past. The threats have piled up this season, and in this episode they all fall down like dominoes, giving us one mini-finale after another. After the sounds of the technologically superb clone dinner party faded away, we’re left with a number of revelations. Spoilers after the jump!

First of all, Castor appears to be basically dead. Knowing that Sarah had the original, Kendall Malone, Coady sends Rudy after Team Leda’s one weak spot: Alison. Fortunately, Alison is a good deal smarter than Coady gives her credit for, and she and Donnie lure Rudy to their garage, where Helena is waiting. Rudy’s already glitching, and Helena kills him easily—but not before they bond over their messed-up pasts. That’s the beauty of Orphan Black—the connection of family that runs through everything gives real emotional oompf to even Fight Club death matches between clones. Meanwhile, Sarah and Mark lure Coady out of wherever she’s hiding so that Topside’s Ferdinand can kill her driver and capture her. Sarah’s promised Topside some of the genetic material from Kendall, and in return, she wants Ferdinand to take care of Castor. As Mark appears to be the only one left now, Castor seems pretty well taken care of. (Of course, Castor being clones, you never know…) 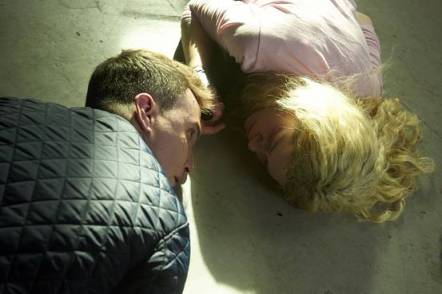 Then there’s the whole clone conspiracy. As Delphine soon finds out, Rachel is alive and well somewhere else in the world, and Dr. Nealon has been lying to her. She confronts him and discovers that it’s Neolution, Leekie’s crazy scientist cult, which has been behind Castor and Topside and Dyad all along. Nealon tries to strangle her, and some kind of disgusting worm starts crawling out of his mouth, so Delphine shoots him. She calls Sarah and tells her Rachel’s alive, which cracks Ferdinand; he kills the Neolutionist spy that’s on him and says now he won’t give any of Kendall’s genetic material to Topside. Rachel, meanwhile, might not know where she is, but she’s been fitted with a new robotic prosthetic eye that actually allows her to see fairly well. Eventually, someone comes into the room where she’s being held. It’s Charlotte, the young clone we met at the end of Season 2. She says that Rachel will be her new mother, and—surprise—Susan Duncan comes into the room after her.

Finally, we see the (possible)? end of Delphine’s story. After finding out that Krystal is in Rachel’s place and rooting out Neolution, Delphine heads to Shay’s to tell her to get back with Cosima and then goes to the aforementioned clone dinner party to kiss Cosima goodbye. Cosima tells Delphine that she forgives her, which is how we know something will happen to Delphine by the end of the episode. Delphine then parks in a parking garage, leaves her car, and walks over to another car before turning around to ask someone off screen, “What will happen to her?” Then she’s shot in the stomach and falls to the ground. 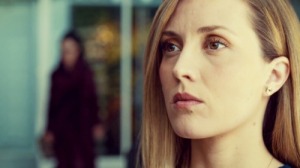 Now, the Orphan Black creators say that Delphine’s actually dead, but that’s also what they said about Helena at the end of Season 1, so I don’t know how much we should trust them on this. What I am wondering about are Delphine’s (possibly) last words. Who is the ‘her’ to whom she’s referring? Cosima? Or another of the clones? We never do see what happens to Krystal after she wakes up, and my first thought was actually that maybe Delphine had done something to her, despite her promising to protect “all Cosima’s sisters” in Episode 1.

Overall, I felt this season lacked some of the cohesiveness that previous seasons had—primarily in the Castor plot, which really fell short as other threats became more prominent. We find out Coady’s ultimate weapon—she wants to weaponize the sterility that the Castor clones are infecting women with—but by the end of the season, we’ve almost forgotten about it. Now, Coady’s in Ferdinand’s custody (or dead), and Mark is the only remaining Castor clone that we know of. It really seems to signal an end to the Castor threat before it began, which is sad, because I think given a little more development, the Castor clones could have really finished the commentary on masculinity that they half-started. I hope some of them are back next season.

We’ve talked about Orphan Black and its problem with characters of color sporadically in these reviews before, and now that the season’s over, I’m even more disappointed in its efforts. After the Orphan Black creators said that Beth and Art’s relationship was important to this season, I was expecting that Art would be around more, too. That wasn’t the case. Though he was able to bring Gracie to Mrs. S and supply the warehouse for the finale, he didn’t get much else to do. It’s not just characters of color, either; Tony, our trans clone from Season 2, didn’t return, and Charlotte, our only clone with a visible physical disability, just barely snuck into the last episode. It’s good that they exist in our universe, but because they aren’t ever around, they seem like an afterthought—like Orphan Black has a token Black character, a token trans character and a token character with a disability. At least Cosima, our other LGBTQ+ clone, is pretty fully-realized. But for a show so explicitly about feminism and agency, it sucks that these other groups can’t get a place at the table. Even though the clones are all white, there’s no reason the non-biologically-related characters can’t be more diverse.

All that being said, I thoroughly enjoyed these last few episodes of Orphan Black. The finale really reiterated the show’s commitment to family, and I loved that the season started with Helena dreaming of a family dinner and ended with a real family dinner (with real Ukrainian food, too, despite Alison’s confusion over it). Though I was afraid the show wouldn’t give any time to this, we got to hear about Sarah’s, Mrs. S’s, and Kendall’s relationship—after Ethan Duncan told Kendall that he cloned her and that one clone was lost in the foster system, it was Kendall who arranged sending Sarah to Mrs. S. And it’s telling that the writers chose to end the episode with Sarah reuniting with Kira, as Mrs. S and Kendall look on. Season 4 is only going to bring us more family-related drama—where’s Charlotte’s actual mother, Topside’s Marion Bowles? Does Rachel know her mother is a Neolutionist? I’m looking forward to Season 4, and to all the speculation these summer months will bring!

2 thoughts on “Orphan Black: “History Yet to be Written” Review”