Another trip back home, and another trip back to my old manga collection. When it comes to situations like this, I know I’ll get some analysis out of it, but I’m never quite sure what it will be. This time I was especially surprised, and I guess I can blame our very own Stinekey for that. A while ago, she wrote a very well thought out post on perceived poverty in geek media using Harry Potter as a jumping off point. The post has been in my head ever since, looming in the back of my mind as I go about my media consumption, but only now have I reached the point where I think I can bring up another point of discussion. 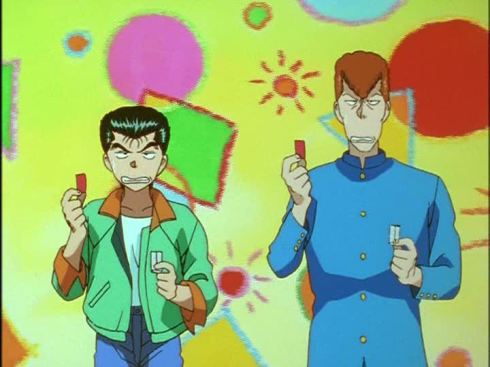 Poverty and lower socioeconomic situations in general just aren’t really portrayed in media unless it’s used as a prop—most commonly used in cop shows to show just how bad off someone was, or to show the struggle of one person while not at all going over the repercussions and struggles that they’ve faced (just that they’re less well-off than the other characters). Especially in terms of shonen manga, when your characters are going through the motions of gaining greater and greater amounts of power and, in some cases, doing thousands upon millions of dollars in property damage in efforts to save the Earth, bringing up the real-life repercussions of money can be a bit of an unwanted reality check. However, reading through the volumes of one of my all-time favorite series, Yu Yu Hakusho, I discovered that the series does a lot more to bring up the struggle of those in relative poverty than I would have expected it would have; though its approach is much more ‘in your face’ than Rowling’s was—which is refreshingly reflective of the series’s protagonist.

Readers and watchers of the anime alike are quickly introduced to Yusuke’s living situation, which is not ideal. For undisclosed reasons his father is no longer in the picture, his twenty-eight-year-old mom holds a job but also indulges in alcohol often, and they live in a seedier part of town. Yusuke himself, at age fourteen and in junior high, doesn’t have a job, but lives comfortably enough that he has what he needs. Yusuke’s rival, Kuwabara, is in a similar situation where he’s not off well, and only lives by the support of his older sister. However, their relative poverty is brought up without focusing on their home life. Yes, Yusuke complains about his mother’s drinking habits, but neither of them really pine over not living in a mansion or having a more affluent life. Instead, the effects of this economic distance from the Japanese middle class is shown directly through how people interact with them, and the big offenders here surprisingly aren’t their fellow students, but their teachers. 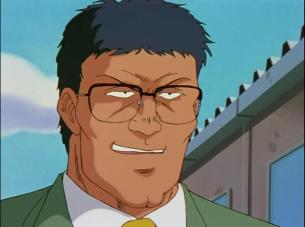 TFW you think your bad plan is going to work.

Due to their situations growing up, both Yusuke and Kuwabara both grew up learning how to fend for themselves, especially in response to bullying. In the case of Ron from Harry Potter, he learned to be somewhat ashamed of not being able to have as many new things as other kids. Yu Yu Hakusho‘s two proud delinquents instead learned to claim respect through the one means available to them: fighting. When the manga starts, we don’t see Yusuke and Kuwabara’s classmates comment on their socioeconomic status. However, two teachers at the school are dead set on profiling all the lower class kids as punks, whether or not they actually cause trouble. With Yusuke, the harshness of the prejudice a bit harder to see because he’s an admittedly shitty student who gets into as much trouble as possible; however, the one method his teacher finally uses to get him kicked out of the school for good is theft. Despite Yusuke never having been accused of stealing before, this teacher believes the plan is flawless because of course Yusuke stole these nice items: he’s poor and a punk. Luckily, the teacher’s plot is discovered, and actually punished by the principal.

While Kuwabara is like Yusuke lite, in that he does get into a lot of trouble, the people that hang out with Kuwabara aren’t necessarily as devoted to causing havoc. In an attempt to punish Kuwabara’s group of friends, a different teacher makes the seemingly impossible demand that if they don’t stay out of fights (their source of pride and honor as a group) for a week, then Kuwabara’s friend Okubo will lose permission to have a part-time job—a job he needs to help his sick mother support him and his two siblings. This permission is especially important since in Japan, schoolkids aren’t allowed to have jobs at all unless their school gives them permission. After they pass this test, the teacher adds another caveat: if they don’t all pass their science exam, the same fate will occur. Needless to say, the teacher is frustrated when they all pass, and instead of accepting that his prejudices need to be overcome, tampers with one of the test papers. Again, luckily the teacher is found out, but it’s this very real prejudice from adults that almost caused these at-risk kids to struggle even more.

While I find that both subtle conversations about the reactions to relative poverty in Harry Potter and Yu Yu Hakusho are beneficial to their audiences perhaps getting a better understanding of these situations, I like how Yu Yu Hakusho handles the “moral at the end of the story”, so to speak. In Harry Potter it seemed to me that the message was that despite his lack of wealth, Ron was able to live a happy, successful life, eventually becoming well-off. This isn’t a bad message by any means, but for some people it may be difficult or impossible to live up to. A media-dictated acceptable level of living just may not be in the cards due to unemployment, the types of jobs available, and other such outside factors. And some people might find happiness in finding their own comfort levels to live in, given the necessities are met. In Yu Yu Hakusho, however, despite eventually being outed as demon world royalty, Yusuke never gets rich, nor does he live like a king. Instead, he takes pride in helping to run a small ramen cart: for him, that’s his happiness. While people should shoot for an affluent life if they want to, this too is a prejudice of sorts. Of course people need access to certain things to live—food, water, shelter, clothes—but achieving these isn’t only possible by getting a government job, for example. Both Yusuke and Kuwabara get to the point where they can live on their own, supporting themselves, but while Kuwabara ends up pursuing higher education, Yusuke takes a route that may not be so highly sought after (being self-employed isn’t usually romanticized unless the business becomes wildly popular). Both are valid;  both routes are perfectly okay, but there’s a lot more support in the media for the former and less for the latter. And so, Yu Yu Hakusho shows that not all bullying comes from kids being cruel, it can also come from deeply ingrained prejudices in adults—and it also presents a future where people don’t need to be well-off financially to be happy. Sure, you may not be as rich as others, but if you do what you like, this too is an acceptable life, and I think this is just as an important message to share.

Also something about friendship. This is a shonen series, after all.