As a kid, one of my favorite movies growing up was The Mummy (and its sequel, The Mummy Returns. It had no other sequels). I was drawn in by its pseudo-Egyptian mythos, but I stayed for its protagonist, Evelyn O’Connell (neé Carnahan). Evy was a fantastic, formative protagonist—she was driven, brilliant, and altogether too reckless for her family’s liking, and despite some scenes where the movies tried their best to make a damsel out of her, she’s a character I return to again and again as an example of great writing.

With all that in mind, today’s fic is a charming story about Evy and Rick O’Connell in between the events of the movies. The Mummy franchise is filled with timeskips, so the fic has a lot to expand on. We start in 1926 Cairo, as the O’Connells get married, and follow them through their adventures, their careers, the Second World War, and the rest of their lives together.

The man who is coming after her looks furious, his two friends still screaming and writhing in the sand. Evy ducks backward, just in time to see Rick go flying, yelling, out of the corner of her eye, and then the grave robber makes a grab for her.

“Don’t touch me,” she warns, dodging and squeezing the trigger of the revolver again, but the barrel clicks empty. The man laughs and steps forward, still chuckling.

Evy knees him between the legs as hard as she can. He shrieks and drops like a stone.

Rick is having rather less success with his opponent – he’s flat on his back in the sand, trying to grapple with an opponent who has a weight advantage of at least five stone. The man has his enormous hands wrapped around Rick’s neck, and the blows that Rick is raining down on the man look weak.

Her furious heart in her throat, Evy sees Rick’s elephant gun lying in the sand. She snatches it up, ejects the spent shell, and pulls the trigger with a thunderous bang.

It feels like being hit by a running horse – the recoil kicks her right off her feet. She slams into the sand and lies there, utterly out of breath, for several long seconds before she finally manages to roll onto her side, rifle still in hand. She finds Rick standing up over the bleeding, shouting cowboy, who she apparently shot in the arse.

“That was the sexiest thing I have ever seen,” Rick says raspily, helping her up onto her feet. “But we have got to teach you how to shoot that thing. You okay?”

He’s unhurt. They’ve successfully fought off a band of ruffians who were going to desecrate the tomb.

Evy smiles enormously at him, her face bright with satisfaction, and she wheezes, “Never better.”

The fic even gives us a little epilogue to the third Mummy movie, which I usually pretend doesn’t exist, and builds upon its failed promise so well that I almost want to pick it up again and see if there was anything I missed in it. (Almost.) It’s clear that the author put some effort into researching the history of this era—maybe more than the actual writers of the movies—and that’s even reflected in the title, an Egyptian Arabic proverb which means “If you steal, steal a camel, and if you love, love (someone as beautiful as) the moon. (If you’re going to do something, go all out.)”

You can check out إن سرقت، اسرق جمل، وإن عشقت، اعشق قمر here on the AO3! If you’re a Mummy fan, it should really brighten your day. 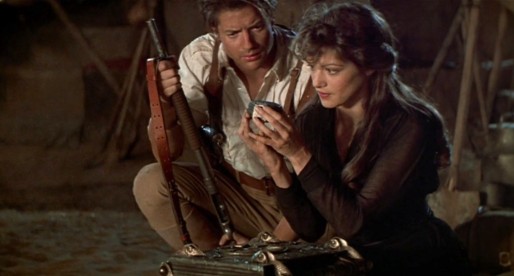