Our plot train has left the station and continues to chug along in this week’s episode of Hannibal. “Dolce” is both a meal course and a musical term: for food it means sweet, in music it means sweetly and softly. While many elements of this episode gave the illusion of sweetness and delicacy, its ending was far from it.

Spoilers, trigger warnings for gore and the usual Hannibal fare below!

Mason is hungry for Hannibal, and tries different pork dishes in order to figure out how, precisely, he intends to eat Hannibal alive. He eventually settles on treating Hannibal like a peking duck, and indulges in a fantasy where he dips his finger in the glaze covering a thoroughly crispy Hannibal. In his usual bombastic manner, he remarks, “Transubstantiation!” It’s a philosophical term favored by Catholics and a few other Christian groups to refer to the complete and total transformation of bread and wine into the body and blood of Jesus Christ during religious services. Hannibal clearly has illusions (delusions?) of divinity, and Mason likens himself to feasting upon God. In the moment I’m too impressed by the depth of symbolism to be offended for my religion.

Most of the women in this episode seem to be experiencing some degree of caged-bird syndrome, as pointed out by Chiyoh and Bedelia. Bedelia has been planning some kind of escape for a while now, and after stitching up Hannibal she packs his bag and sends him away. She injects herself with the same drugs that Hannibal gave Miriam Lass, in order to feign total ignorance and helplessness when all the people trailing Hannibal come to call. Jack and Will see right through it, and Will runs off to go meet up with Hannibal in a museum (cue sweet, adorable moment akin to long lost lovers meeting up again after a decade apart… before they try to kill each other of course). The Italian police come calling, and they know something’s up. It helps that they’re thoroughly in Mason’s pocket. But Bedelia sees through it, and sends them off searching for Hannibal with some cryptic clues. She’s not out of the woods yet, but she knows how to play the game. 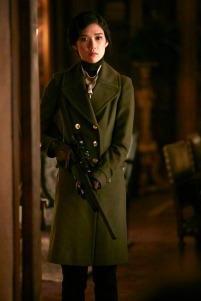 Chiyoh is tailing Hannibal and also pays a visit to Bedelia. For a second it seems like they might get in a pissing contest over who is the more important lady in Hannibal’s life, but they mostly sidestep it and it seems like they come to a mutual respect. Hannibal’s delighted when Will tells him that Chiyoh threw him off the train and was the one who killed their prisoner. It seems like Chiyoh’s turning into exactly the kind of person Hannibal wants her to be. She spies him and Will coming out of the museum through her sniper scope, and deftly shoots Will in the shoulder when he takes out his switchblade. Was Will really going to stab Hannibal in broad daylight, in the middle of an Italian square? I don’t doubt it.

Margot’s still with Mason, and might still want a child. Or, at least, Mason certainly believes she does. In a scene that makes Cersei and Jamie Lannister look downright wholesome, Mason “apologizes” to Margot for extracting her uterus and tells her that he wishes they could have a baby together. He immediately writes off adoption (gotta keep the bloodline going!) and basically tells her to go find someone to be an egg donor. Cut to a kaleidoscopic sex scene between Margot and Alana, with as much yonic imagery as possible. I guess maybe they’re both bisexual? Margot’s identified herself to the audience as a lesbian, but she slept with Will (to get pregnant). Alana’s slept with Hannibal before, and if there were any indications (before this scene) that she’s also into women I missed them. There’s an interesting parallel to Will and Hannibal: earlier in the episode Will tells Hannibal that he feels like they’re one and the same, or that they’re like conjoined twins. When Alana and Margot have sex, it’s nearly impossible to tell where one begins and the other ends. My first guess was that it’s a symbol of Alana taking the place of Margot in Mason’s incestuous plans, and that maybe Margot is manipulating Alana through sex, but I don’t think that’s the case. When they’re getting dressed, Margot asks Alana point blank if she knows anything about harvesting sperm. The way she asked the question is key; it makes them seem like co-conspirators. Margot (and Alana) may still have agency separate from Mason’s manipulations.

This is where we leave any sweetness behind. After Hannibal patches up Will’s wound, he drugs him and straps him to a chair at the dinner table, feeding him an infusion of parsley and thyme. Jack drops by (after Chiyoh chooses to avoid confronting him in the elevator) and Hannibal, who is hiding under the table, slits his Achilles tendon. Jack wakes up in a drugged haze strapped to a chair at the other end of the table, and is forced to watch as Hannibal begins to cut into Will’s skull so they can both eat his brain. Jack screams, and it cuts to black.

Suddenly a door opens. Hannibal and Will (partially cut skull and all) are hanging upside down in a meat truck as Mason happily looks on. What? How? I guess we’ll find out next week.

Episode Tally:
Meals that were almost people: two
Ladies with dubious amounts of agency: four?
Vagina symbols on the screen: too many, but also not enough