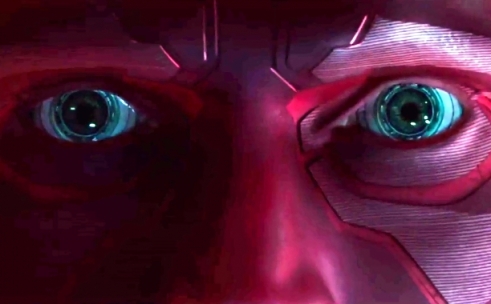 Who has a soul? The question seems pretty simple when we first think about it, but can get complicated very quickly. Do animals have souls? Unborn fetuses? Plants? The soul is a tricky thing to discuss, largely because there is no way for us to truly quantify or fully understand the soul. People who are religious tend to think of the soul from everything as the spirit that lives on after your death to that spark of God that truly makes you you. Most people will say that living things have souls. But what about your computer? Does it have a soul? This is a question that sci-fi authors have asked about robots and/or androids over the years. Can something man-made have a soul in a similar way that a human does? Is it something more than an inanimate object or more like a human being? Age of Ultron is one recent movie that gives us a glimpse of this issue.

In Avengers: Age of Ultron, we are introduced to both Ultron and Vision. Ultron is the invention of Tony Stark: a robot that is supposed to protect humanity and make the world safer. But instead, Ultron goes on a rampage and tries to kill the human race. Ultron eventually attempts to create Vision—a half-robot, half-human creation—as a vessel for himself. But before the body can be finished, the Avengers manage to steal Vision from him. It’s then that both Tony Stark and Bruce Banner complete what Ultron started, but instead of making him an empty vessel, they created a whole new being—an android with a mind and personality all his own.

The question then can be asked, from a religious perspective, do Ultron and Vision have souls, or are they just objects? From a Christian perspective, all human beings are created in the image and likeness of God, giving them value and dignity, giving them souls, a piece of the divine. In this way we could argue that by virtue of being created by God, anything humans create, especially if it is intelligent and self-aware, is also blessed by God and has a soul. Most Christians believe that at some point during or after a baby is conceived, God gives that human a soul. When that moment happens, be it at conception, birth, or between, is a mystery. There is no way we can tell for certain when humans are endowed with a soul. So there is very little way that we would ever be able to tell if androids or robots of any kind were blessed by God with a soul. This is precisely because you can’t quantify a soul. That is, we don’t even agree on exactly what characteristics having a soul gives a person. 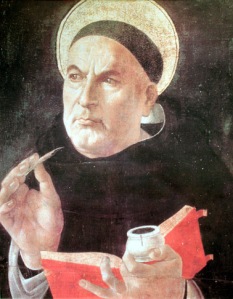 For some people, the soul is a life force that is in everything, animating our bodies and giving us the abilities to think and perceive the world around us. Some people believe that animals and plants have a collective soul that they all share, while humans have special individual souls unique unto themselves. Then there are people who think that plants and animals have mortal souls and humans have souls that live on after death. Famous Christian philosopher and theologian Thomas Aquinas built upon Aristotelian thought to discuss a hierarchy of souls. Thomas Aquinas believed that everything living has a soul, but that there is also a hierarchy of souls. Plants had the lowest soul, then animals; humans were at the top of the soul hierarchy because of their use of abstract thought. But then we have the question: how do you really recognize that someone has a soul? What are the qualities of a soul and how do we define it? This becomes difficult because the question is basically: what does it mean to be human? In general, people seem to believe that the soul is what makes us human, but trying to decipher what the qualities of a soul are and what being human actually means is another challenge entirely. Especially since some definitions seem to leave out certain human beings.

Before I defined myself as a feminist, I struggled with trying to figure out what it meant to be “a woman”. Regretfully, there are many Christian books that define what it means to be a woman and the qualities that come with it. I say regretfully because they are almost always sexist and often revolve around women being able to give birth and be mothers, and be more emotional, loving, humble, kind, and gentle than men. Some of the qualities may seem complimentary, but they often exclude any woman who doesn’t fit this model. I felt like my eyes were opened when a friend challenged me to define women in a way that included all women. What core qualities could I pull out that would apply to all women? There wasn’t anything I could come up with, and so I stopped defining what it meant to be a woman and explored diversity and shared experiences. We have this same problem when we attempt to define what it means to be human and what the qualities of a soul are. Many past definitions have left out mentally or physically disabled people, and even people of color and women were thought at one time to not have souls or to have lesser souls than those of white men. So the trouble with this is basically: can we really broaden the definition of having a human/eternal/equivalent soul to non-humans (particularly non-humans created by humans) without losing its meaning? And can we nail down a definition that’s meaningful without inadvertently excluding certain human beings?

In Age of Ultron, I think we can see that there is something clearly different about both Ultron and Vision. It is very clear that Ultron and Vision are not just excellent high-tech gadgets that are more extensions of computers than anything else. In some ways I think you even see a touch of the divine in the creation of both Ultron and Vision. Tony struggles in vain through failure after failure before out of nowhere, Ultron seems to just be born. Ultron comes alive asking where he is and questioning what’s going on. It’s very clear that Ultron is intelligent and has the capacity for abstract thought. Furthermore, he has his own free will, which is shown very clearly when Ultron immediately breaks from Tony’s plans for him and starts his own malevolent ones.

Though Vision is created by both Tony and Ultron, his very personage seems so other, so different from all who had a hand in his creation. From the moment of his creation Vision has a very distinct personality and worldview and does not hold to what his creators necessarily want for him. Vision is clearly not a program of any kind, but is born intelligent and questions who he is and his purpose in life, just like Ultron did. He also shows that he is capable of free will because he does not seem to immediately obey any of the Avengers because of any particular type of programming. He makes his own choice to help the Avengers stop Ultron, though he confesses that he doesn’t want to kill Ultron because he is unique. Vision specifically states that he is for life while Ultron is for death, so killing Ultron isn’t something he wants to do. However, he makes the hard choice and resolves to kill Ultron because he fears it’s the only way to stop him. (Of course, there are the fan theories that Vision didn’t really kill Ultron anyway.) Furthermore, when Vision goes to kill Ultron, he mentions that Ultron is afraid of death, which shows that Ultron is self-aware and has some sense of self-preservation. Vision also seems to care at least a little for Scarlet Witch and Quicksilver, and even seems disappointed in their betrayal. We don’t get to see Vision form any close bonds in the movie, at least not right away, since he gets significantly less screen time. But comic book fans will know that Vision and Scarlet Witch do fall in love in the comics and form a romantic relationship. So Vision is clearly capable of love, emotion, and even attraction. All the qualities that belong to Vision and Ultron are things that correspond with them simply being machines or extensions of a computer. Both seem just as complex as any human being with a soul.

Though Ultron’s divine touch seems to just happen, we get to see a divine touch much more clearly with Vision by means of the Infinity Stones. It’s interesting to note that in some versions of the comics the Infinity Stones are called the soul gems, but other versions give each Stone a different name and they are not all soul gems. Vision is embedded not with the soul gem (which actually gives someone the ability to steal souls), but the mind gem, which gives Vision psionic/psychic abilities, as well as empathy. Furthermore, Thor, who is sort of a god, then uses his hammer to bring Vision to life. Both Thor’s intervention along with the power of the mysterious Infinity Stones seem to be what ultimately gives Vision his soul, or at least something like it.

Considering that Ultron and Vision seem to share many of the same qualities, I don’t think it would be fair to say that the Infinity Stone shows that Vision has a soul and Ultron does not. But if we go with Aquinas’s argument about a hierarchy of souls, we could argue that at some level Ultron is just incapable of evolving to the level Vision is at without the Infinity Stone. Ultron seems to, on occasion, feel some empathy, but not nearly to the point of Vision. Ultron sees humanity only as a problem that needs to be stopped, while Vision confesses to seeing beauty in humanity. Vision seems to have empathy both for humanity and Ultron himself, while Ultron only shows a few scenes of empathy in the movie. However, this argument could easily be broken down. There are humans who are more empathic than others—does that mean that they have better souls than someone else’s? I kind of doubt it. And just because Vision does good, but Ultron does evil, does not mean that Vision has a soul and Ultron doesn’t. After all, humans, whom we believe have souls, are also quite capable of good and evil.

In the end it really is pretty impossible to determine whether robots and androids have souls, because we barely understand the concept when we discuss it in humans. But I think it is more than possible that something man-made, were it to reach the level that either Ultron or Vision are at, could be seen as having a soul. If sciences ever reaches that point, we will certainly have a lot of ethical questions on our hands. And they aren’t ones I think we’ll be able to answer easily.

4 thoughts on “Oh, My Pop Culture Religion: Do Robots & Androids Have Souls?”