I am still in idol hell.

It’s been three months since my criticism of Love Live: School Idol Festival, and my opinions really haven’t changed that much. I just have to admit it to myself: I like the game mechanics despite the problematic material. Though I may not have replied to all the comments, I have read through all of them, and I do appreciate all the points that you, the commenters, brought up. Reading through them, though, one topic continued festering in my mind: are there any female-marketed equivalents to SIF? I have a phone incapable of running mobile games (and BlueStacks is especially hard on my poor laptop) so I haven’t exactly had the opportunity to go delving; however, sometimes life just drops a gift on your doorstep, and heaven forbid I ignore it. I present for your comparison pleasure: I-Chu. 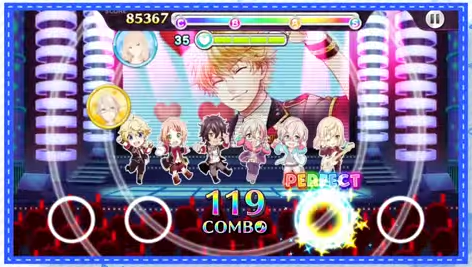 As you can probably guess, I-Chu takes the same kind of game mechanics, but instead of playing as Muse (the band from Love Live), the player takes on the role of a producer/teacher, watching over a whole wealth of bands featuring boys of many different types and cultures. Game mechanics-wise, the games are roughly similar: tap circles, score points, idolize idols, scout for better idols. Story-wise, however, is where the two diverge, and I think this game better illustrates some of what makes SIF slightly more problematic than I-Chu.

Truth be told, neither game really has a solid story. SIF is random vignettes about what the nine main girls go through from hanging out at school to celebrating holidays together. From what I could gather with I-Chu (the game itself is recent enough to barely have any translations out, and my own translation skills aren’t as good as they used to be) the story focuses on all the idol groups getting to know one another and learning how to be idols—basically what Love Live covered in its anime. Ultimately, though, this aspect of the story is one that I find inconsequential when speaking about what players might subconsciously take from it. What I want to focus on is what role the player themselves has in the plot. SIF presents the player’s experience in two very different ways: the “main story” is from an omniscient point of view where it’s basically a small anime episode, and then the “side story” is much more personal. In these side stories, the player is supposedly someone at the school, and thus can interact with all the idols; however, it’s not really said for sure. Conversely, in I-Chu, the player character is an actual character who has dialogue and in the main story, can even sometimes make decisions from a list of three choices. Thus, when the player gets those side stories, it’s a continuation of their character rather than them suddenly being thrust into the setting for no reason.

While these narrative choices might not seem like too big of a deal, they do bring to light a difference in media that is directly marketed towards the different demographics—ladies and a presumably male “otaku” audience. While I-Chu is undeniably more of a dating sim than SIF, and thus more invested in having the player form that romantic-ish connection with its characters, by allowing the players these small choices in the game, it also adds a sense of responsibility in interacting with the characters. Now, of course I’m not talking about any “wow I said this and the character now hates me” kind of intense choices (it’s still a phone game), but there are stakes. Tiny, tiny stakes; both in how the characters react to the player and each other. SIF does not have these stakes, nor this feeling of imparted responsibility concerning the characters. 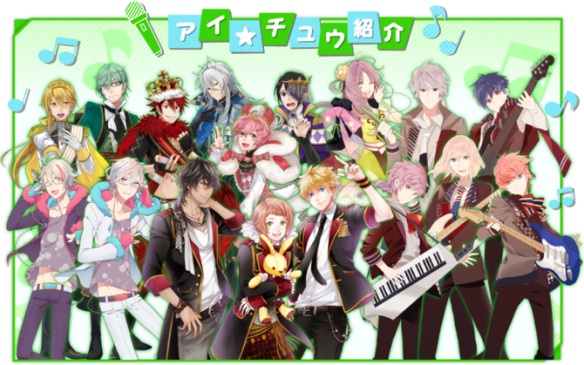 And really, this wouldn’t be so much of a problem if the side stories in SIF weren’t all completely implied romantic situations. While SIF is not by any means a dating sim, it is a game where girls end up inviting the players on dates often. However, as the player never has the opportunity to respond, it’s clear that things are always going to go well; the girl will be charmed, the implied date/hang-out will go well, you’ll see each other again. While it’s true I-Chu beaus will never turn you down, thanks to the possibility of choice, there is still a potential for the characters to turn you down, to be their own characters. SIF characters never have the chance, even implicitly, to say no. And for a game starring high school girls, which has a twenty-one and over male audience as its target demographic, this is very problematic. Not because people are going to look at this and immediately think they can get away with doing these things, but because it continues to foster an environment where these things are accepted as normal and okay. As reflections of real life (especially an anime whose setting is a very real life Japan), fictional media should never cultivate a setting where, to this demographic, this kind of thing is acceptable. 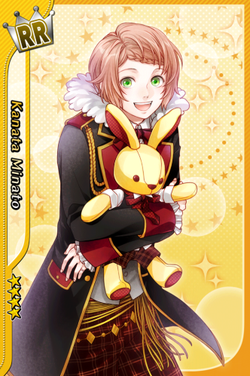 I-Chu is not perfect in this either. Indeed, it holds some of the same problematic elements as SIF. These don’t become any less problematic just because the characters are now dudes. Looking at the company that produced I-Chu, Liber Entertainment, I can’t exactly narrow down what their target demographic seems to be—if I were to guess, I’d say teens to mid-twenties with no gender restriction. Taking into consideration their recent acquisition by Aeria Inc.—distributor of many a shitty anime MMO—this assumption is only reinforced. We should take into account that I-Chu is still a game where the player can semi-romance several fifteen year old boys. While the player character in I-Chu is an actual character with dialogue, they are still essentially you. Which, for me, means that I, a twenty-six year old woman, have a bunch of fifteen year old kids calling me up asking me what my favorite flower is. There are some options that are older (one of the first characters the player meets is twenty-one), but that doesn’t negate that being put into a potentially romantic situation with a fifteen year old is still an issue. Not knowing the true demographics, I can’t say for sure if this is just a problem for me being outside the intended audience, or an issue being perpetuated by the company itself.

Now, in my last article, I may have come down a bit hard on otaku, but otaku culture in and of itself can become such a toxic thing. While I don’t believe that watching problematic media turns its fans into horrible people, it does contribute to a culture where people are going to begin to develop some very negative viewpoints concerning a fictional world because it doesn’t affect them in real life. But those very same viewpoints can absolutely bleed over into thoughts about real people. For a non-anime example, look at people who say that Cersei from Game of Thrones deserved to have been shamed like she was at the end of the last season. Even as a fictional character, why would anyone “deserve” to be subjected to what she went through; what does this reflect about what people think when situations similar to this happen in real life? Fiction and reality are separated, but only by a thin line. While I personally believe that I-Chu is the less problematic game in how it presents its characters, neither I-Chu nor SIF exist in a world where what they’re selling is completely separate from our reality.