Wow, so much happened in last night’s episode, it’s hard to believe it was just forty-one minutes long. I kept checking the time, incredulous that it wasn’t over (and beginning to dread how I was gonna condense all of this into a review that wasn’t the size of a novel). Speaking of novels, this week continues with the book-themed title and explores the consequences of reading the Dread Doctors book by Dr. Valack. In short: sometimes reading can be bad for you. Millions of spoilers after the jump and trigger warnings for mental illness and self-harm.

The ep starts out in medias res in a big way, with Scott, Malia, and Mama McCall fighting and fleeing from a Dread Doctor in poor Beacon Hills Hospital. Seriously, what the patients here have to put up with. Turns out, reading the Dread Doctors book was an extremely bad idea. Remember Valack said it was supposed to help trigger suppressed memories of the Dread Doctors? Seems mostly it just triggers extremely upsetting memories from your childhood (which also explains Malia’s flashback to the car accident and Desert Wolf scene last week). At least that’s what happened when The Scoobies made an ad hoc book club to read it. Scott remembered having an asthma attack as a boy right after his dog had been attacked (and killed?) by another dog. For Lydia, the traumatic childhood memory was going to Eichen House to visit her banshee grandmother only to discover Grandma Martin had drilled a hole in her own head. Stiles had the most upsetting memory of all: his mother’s dementia had given her paranoid delusions that ten-year-old Stiles was out to get her so she wanted nothing to do with him and tried to beat him when he approached.

A major development this week involved the discovery of several new unearthed burials on Beacon Hills High campus, implying a whopping new eight chimeras are now roaming about town. The gang begins asking an interesting question: why are these certain kids being targeted for the Dread Doctors’ experimentation? What’s the link? They aren’t the only ones searching: the next generation is hot on the trail, with Mason and Brett searching too. Since finding out Brett is bisexual, I, for one, am rooting for Mason and Brett to get together. Why not!

On the lookout for chimeras, Lydia tries to approach a potential candidate, but it turns out the girl is merely suffering from trichotillomania. It started out as this really neat, honest, and humanizing scene talking about this very infrequently mentioned disorder, but the moment was totally ruined because it was here that Lydia had her traumatic flashback, stealing the scene from this girl bravely opening up about her mental health struggles. Sigh. Liam meanwhile takes his search elsewhere—namely that skeezy club Sinema. Seriously this club really bothers me: why are they letting high school sophomores work there??! Even the shirtless go-go dancers looked really young the first time we saw the club; are they underage high schoolers too? Maybe it’s cuz a lot of this new crew looks very baby-faced, but I feel very protective of their last shreds of youthful innocence, so this club really grosses me out.

Anyway, Hayden is there and Liam figures out she is totes a chimera. This also explains why when Lydia went to the hospital to explore the memory about the Dread Doctors during surgery (after figuring out it wasn’t actually her own memory… #bansheeprobs) and heard a voice saying the name “Hayden” (and not “Aiden” like I first thought).

Meanwhile, Theo continues to play Yoko to the group, building secret confidences and seeding discord among the ranks, and from all corners: he is the only one Malia told about seeing the Desert Wolf in her flashback, and he was clearly trying to seduce her with his shirtless workout scene this week (#TheoThirstTrap was maybe the first TW hashtag I actually thought was clever)—the sexual tension is there, and unfortunately, I’m willing to bet she is going to end up cheating on Stiles with him this season. For Stiles, the shared secret is much worse: when Theo kills a rogue chimera, he tells Stiles not to tell the others, threatening with blackmail because he knows Stiles killed Donovan. Theo also gets Scott to open up about Kira’s increasingly erratic surges of power, even as far as Scott saying he’s not sure if he can trust her anymore. Fun side bit: we finally learn what Kira’s been saying in Japanese: “Watashi wa shi no shisha da (私は死の使者だ)”—“I am the messenger of death”. Yikes! …but also kind of makes sense given when her new scary attack mode. 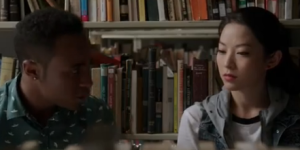 “Don’t worry, even if the writers have forgotten you, I haven’t.”

So, yes a million and one things happened this episode, and I thought over all it was a great episode. There was phenomenal momentum and it felt like things we were really moving forward, the plot finally starting to come together. Searching for a link between the chimeras is fascinating: we find out Hayden is on medication after a kidney transplant a few years ago—was she picked by the Dread Doctors because of her health problems since her body had already been altered by science? And is she a successful chimera? So far she seems to be handling it a lot better than the others, and she hasn’t gone on a murderous spree yet, but there is still time I suppose. I love that we are finally learning more about Kira as a kitsune; it was all but forgotten about in Season 4, but they’re finally talking about it now! I guess in some ways it makes sense that her coming more fully into her powers would take longer than the werewolves since kitsune are more mystical and much more long-lived, but it was starting to feel like the writers had forgotten about her.

And I’m just gonna say it cuz there was a scene: I don’t hate Marrish. I speak as the one voice of dissent on this blog, but I ship it. I’m like 90% sure Lydia mentioned turning eighteen in Season 4, and Parrish said he was twenty-four in 3B. Most of all, I just think it’s being handled very well and maturely, that there is a lot of mutual respect which bodes well. Parrish is not making pervy moves on her like creepy Eichen House workers or mind-rapey Peter Hale; Lydia is the one in charge and calling the shots—for example, she’s the one who approached him to help train her to fight, he didn’t offer or impose. Honestly, I think the way “friend-zoned” Stiles obsessed over her in Season 1 is creepier than Marrish. Obviously it’s different now, but back then you got the sense that Stiles felt truly entitled to her attention and affection in a way I don’t think Parrish feels.

So now that some of you disagree strongly with me, I hope we can all agree this is shaping up to be an awesome season. I had my doubts at the premiere, but this is really turning out to be one of my favorite seasons: Kira’s powers are being explored, Malia has the best haircut of all time, and most of all there’s no Peter Hale. Though who else feels like Theo is basically next generation Peter? Next week’s promo promises even more action and suspense, so fasten your seatbelts for next Moon Day!