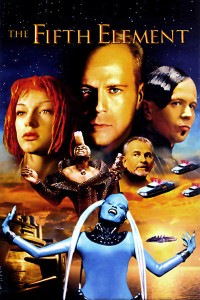 I saw The Fifth Element for the first time when I was about ten or eleven. I loved it – the high-tech but grungy future aesthetics, Korben Dallas, the reluctant hero, Leeloo, the supreme being, and the story about how love saves the world. It immediately became one of my favorite movies and I’ve had a thing for Milla Jovovich and Bruce Willis ever since. The last time I saw the movie was a few years ago, so I decided to watch it again to make sure I wasn’t remembering it to be better than it actually was. And I wasn’t disappointed, mostly.

The story is pretty much a classic quest to save the world. Long ago, a race of aliens created a weapon made up of five elements to defeat the ultimate evil, which resurfaces every 5000 years. An order of priests pass the information about it from generation to generation until the evil entity shows up again in 2263. The aliens flying to Earth to assemble the weapon are destroyed, but the Fifth Element, Leeloo, survives and lands in the hands of our reluctant hero, Korben Dallas. He is then sucked into a race to retrieve the other four elements and save the world.

The story is quite simple, perhaps, but I’m a sucker for stories blending religion, science, and spirituality. It’s always nice when the power of love is given an actual physical force which can protect the world from a corporeal evil. However, it is a little on the nose at times, like, when Leeloo is learning about the history of Earth and she slowly and deliberately types in “WAR”, the passage about which culminates with an image of an atomic bomb exploding (which, I just find it difficult to believe that all those years later the atomic bomb is still the worst weapon that humanity could come up with).

These aliens are so hilarious. I mean, just look at them, they’re like metal donuts.

Despite these small annoyances, the movie is actually a great comedy with perfect comedic timing and great one-liners delivered by a fantastic cast. I mean, at the very beginning, one of the robotic aliens gets locked inside a pyramid just because, for all their technological advancements, they can’t even walk fast. And every sound or move from Ruby Rhod (Chris Tucker) is comedic genius.

Speaking of Ruby Rhod, he’s such a fascinating character—a Black effeminate man who’s the universe’s sex symbol. He wears tight clothing, he walks swaying his hips, and generally behaves like a diva. He is quite a bit ridiculous, yes, but his femininity isn’t used to belittle him and he’s universally desired by women, who all but swoon in his presence, and he takes full advantage of it. He doesn’t takes advantage of the women, he leaves them completely satisfied.

One of the biggest shortcomings of this movie is the lack of women who actually do something and are given any characterization (aside from swooning at Ruby Rhod’s feet); there’s only Leeloo and the Diva Plavalaguna, and the latter only has about two minutes of screen time and then dies. Everyone else—the president and his entourage, the scientists who revive Leeloo, the army—are all male. And upon my most recent viewing of the movie I’ve actually begun to question whether Leeloo should actually be referred to as female.

I do love the idea that the supreme being is a woman, but aside from the fact that Leeloo has a body to which everyone is very quick to assign the female gender and, heteronormatively, because her love interest is Korben, she doesn’t refer to herself as a woman—only as the supreme being. Unfortunately, otherwise, Leeloo’s gender is quite ignored. It’s a shame, too, because having a non-binary person as the supreme being, not to mention the lead character who saves the world and gets their happy ending, would be just amazing.

Assuming that Leeloo is female, her characterization as the supreme being could easily become problematic, given that it puts the only central female character on a pedestal and removes all the flaws and characteristics that help create a complex character. However, the movie partially saves itself from this pitfall by allowing Leeloo to be the comic relief at times and making her unable to complete her role as the uniting element due to losing her faith and hope. Even though physically she was created to protect, Leeloo needs to find emotional strength and will to be able to do that. The fact that Leeloo needs Korben’s help and love to be able to perform her perfect being role is quite fascinating but also a bit troubling. Leeloo is the chosen one in this story, but she appears to be incomplete without Korben’s love, which suggests that by herself she’s not actually perfect, incomplete. On the other hand, a weakness makes her more human. But it would be better if a female character’s weakness wasn’t that she needs to learn to rely on a man, which is so often the case. (It could easily be solved by making Korben a woman, just saying.) 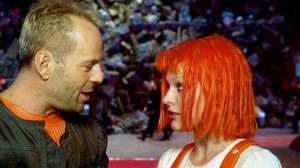 As such, The Fifth Element is quite a fascinating tale of two heroes—the chosen one, the supreme being, Leeloo and the rugged ex-military reluctant hero, Korben. Leeloo possesses super intelligence and strength, but she needs to find in herself the ability to believe and to love. Korben’s wife left him, he lives in a tiny apartment, and doesn’t seem to have any joy left in his life, and needs to find someone to love and something to believe in.

All in all, The Fifth Element is a fun space romp which sends the message of love. It has interesting stereotype-defying characters, such as Ruby Rhod. Also, my bisexual heart will forever love both Leeloo and Korben, because they’re amazing.

1 thought on “Throwback Thursdays: The Fifth Element Holds Up to the Test of Time”