If there’s one thing Tumblr (or at least the people I follow) is obsessed with, it’s making fun of the deeply ingrained heteronormativity that people force on their children from a young age. I’m sure that at some point in your life you’ve heard someone refer to a male two year old as a future ladies’ man for smiling at his female babysitter, or another female two year old close by, or some similar nonsense. This is so problematic because it teaches children from before the time they can form words that boys are supposed to marry girls, girls are supposed to marry boys, and that’s all there is to gender and romance.

We’ve been making some progress with changing the representation of romance as straights-only in popular children’s media—tiny, tiny baby steps, but progress nonetheless. We have Korra and Asami, canon forever no take-backsies. We’ve got the extended cast of Steven Universe, many of whom display queer romantic affection toward members of the same (presented) gender. But there’s a connecting thread between these and any of the kids’ fantasy/adventure books I can think of that feature queer characters: they’re all teenagers or older.

While I can list any number of harmless crushes and “I like you-like you”s shown in kids’ media between different gender couples, there isn’t anything like that that I’ve seen that shows an equivalent queer relationship or even unrequited crush.

And while many people did or do come to terms with their queerness in their teens or even as adults, it’s very possible that this is just because society still is stuck on the idea that queerness is An Adult Thing. Because society links being LGBTQ+ to the act of sex in a way that it doesn’t for heterosexuality, there’s still a taboo on the idea of LGBTQ+ children. Hell, when I was growing up, I didn’t even find out what “gay” meant until I was maybe eleven, and I didn’t learn any of the other terms until much later. I never even considered the fact that something like that could apply to me. When I was little and wanted to marry my best female friend because she was my favorite person ever, I was told that only girls and boys can get married.

Kids aren’t born thinking same-sex attraction is wrong—this is something that society teaches them. There are two ways out of this that I can see: first, stop putting any sort of romantic storylines in plots meant for young children. However, this seems unlikely and honestly probably the worst of the two options; after all, regardless of orientation, most children do experience romantic attraction (my first crush started in second grade, if I recall correctly), and leaving a void that shows no one crushing on anyone ever will just look silly. The better option seems simple to me: show a diversity of kids who like-like each other. Show kids who have crushes on a variety of genders. Show kids who crush on the same gender. Show kids who don’t have crushes on anyone and enforce the idea that that’s okay too. If you want to delve into a more real-world storyline, you could even show a coming out story for younger kids, where they realize they’re different and that’s okay, and where they learn that there are words for the things they’re feeling.

Stories like Raina Telgemeier’s Drama, a graphic novel about middle schoolers putting on a play and dealing with crushes of all sorts, get into these in a more slice-of-life sense, but there’s no reason we can’t see more of this in fantasy/adventure stories as well. I don’t see it happening in Steven Universe—Connie and Steven’s relationship is both so strongly supported by the narrative and so darn cute that I doubt the writers would infringe on it for one of them to be attracted to someone else. Once upon a time I had hope for Adventure Time, but it’s been having problems from a purely narrative standpoint recently, and it seems unlikely that it will both surmount those and offer a win for representation. And anyway, the flagship queer ship of Adventure Time is still between two older characters, Princess Bubblegum and Marceline. 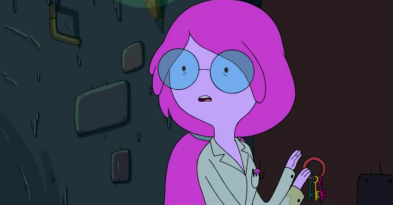 Basically, I’m not sure if this sort of story would be possible in the media we already have. It might be necessary for a entirely new series or movie or book to arise to give us this representation, and I’m not sure where it would come from. A queer Disney hero or heroine seems impossibly far off, and even then, although children by the millions sympathize with Disney’s protagonists, almost all of the flagship favorite protags of Disney canon are in their teens or older. In the end, while some creators seem to be working tirelessly to bring inclusive media to younger audiences, the majority of our current kids’ media falls flat. I can only hope that someone picks up on this unaddressed piece of the market soon, and fills a void that so desperately needs filling.

3 thoughts on “Sexualized Saturdays: Queerness Is for Grownups (or at Least Teenagers)”