We know Sarah is the wild type—the writers say it a couple times every season, and in Season 3 they said it so much that I even texted Saika to complain about it. (“Yeah, she’s not a Pokémon,” was Saika’s response, for the record.) Sarah is basically our protagonist, and she got there by stealing Beth’s identity, stealing money from Alison, and stealing biological samples meant for Cosima. All of this stealing, Sarah constantly said, was to make a better life for her and her daughter Kira (and foster brother Felix). However, we never see much of Sarah actually being a mom. Kira doesn’t get much character development; we know she cares about the clones, and that she can heal at an unprecedented rate. But she’s more often used as an object which other characters are fighting over or using as a way to get to Sarah—she’s threatened by Dyad, kidnapped by Rachel, held hostage by Rudy. In Season 3, Sarah finally sent Kira and Cal away so that they’d be safe while she fought Castor on their behalf.

Now that Castor is, for all intents and purposes, pretty dead, why don’t we see more of Sarah as a full-time mom? She might find it’s harder than she thinks. Also, with the Neolutionists coming back in a big way in Season 4, this would give us more time to properly develop Kira’s character. Given her unique biology and the Neolutionists’ hard-on for all things unique and biological, it seems like a logical next step. This would also be a good way to make Kira into a person, not an object, and for Sarah to actually attempt to fulfill her oft-stated goals.

“We all have our roles to play,” says Delphine at the outset of Season 3, but please tell me she didn’t mean that literally.

You could probably see in my reviews of the latest season that I was incredibly disappointed with Alison’s character in Season 3. Finally, here was an example of a clone stepping out of her prearranged role: Alison becoming a drug dealer was not only hilarious, it gave her something to do aside from being a housewife. Housewife, like Cosima’s scientist, is a profession, not a defining character trait, and Alison ably proved in Season 3 that she was capable of being a dedicated, strategic businesswoman should she choose to switch professions. However, Season 3 ended with Helena killing the drug lord that the Hendrixes ran pills for and the two of them now seem to be out of the game entirely. If Alison were happy as a soccer mom, that would be one thing, but she clearly seems fed up with her bumbling husband, Donnie, and the show never addressed why she surprisingly chose to stick with him and her suburban life instead of moving on with Jason Kellerman or even just moving out on her own.

I know Alison was meant to be a fun suburban stereotype, but she’s capable of being so much more than that—and more importantly, Alison’s always seemed like she’s wanted more than that. Orphan Black came so close to character growth for Alison, only to snatch it back at the last second. Alison truly cares for her sisters, and I’d love to see her step out of the suburbs and take on a more active role protecting them. She’s obviously shown that she’s capable of handling herself in high-pressure situations, and someone as ruthlessly dedicated as Alison could definitely do some damage against the Neolutionists.

There’s no one to replace Cosima in the geek monkey role, but, profession aside, Cosima’s plotlines have constantly been about her regrettable dating life. First she dated Delphine, who was a suspicious Dyad monitor at the beginning and a suspicious Dyad leader by the end, and then Shay, who may or may not be a military spy. With Delphine probably dead and Shay gruesomely warned off for the start of Season 4, this would be a good time for Cosima to actually be single. Because of her relationships, Cosima has been a pretty consistently static character. In Season 1, Sarah warned her off Delphine, Cosima went right ahead and dated Delphine, then ended up apologizing for it. In Season 3, Delphine warned her off Shay, Cosima went right ahead and dated Shay, then ended up apologizing for it. Next season, Cosima needs to actually not have a new love interest. Let Sarah or Alison take the romantic entanglements side plot—Cosima has some science to do.

Finally, there’s Helena. Poor Helena needs to have something good happen to her for once, and this is something we finally might get. She was a brainwashed assassin in Season 1, kidnapped by the Proletheans for much of Season 2, and sold to Project Castor for much of Season 3. She needs a chance to stabilize, and fortunately, nothing bad happened to her at the end of Season 3. She wasn’t kidnapped again, and she’s finally with all her sisters, who all want to look after her and her baby. So much of Helena’s life has been dictated by other people, but all of them have told her that doing what they say will get her what she wants: family. Now that Helena is actually with biological family, it’s time to let her take a break and see what kind of person she is underneath all the things that have happened to her. 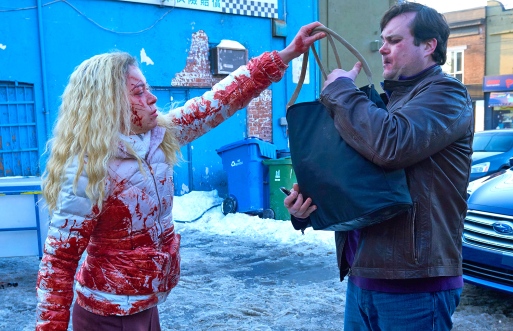 “I’m very good with children,” says Helena in Season 2. Shockingly… this is true.

At the start of the series, each clone had a stereotypical role and filled that role with aplomb. However, in the three seasons since, the clones haven’t gotten much of an opportunity to stretch beyond that limited beginning. Sarah’s marginally more responsible, but Alison’s still constantly sidelined as the comedic sidekick, Cosima’s still making poor romantic choices, and Helena’s been repeatedly traumatized every season. As interesting as the plot of Orphan Black is, its characters won’t be able to keep up if new things don’t happen for them. And the annoying thing is, we know Orphan Black is capable of better writing. Just look at what they did with Krystal Goderich, the clone who everyone thought was a ditz and who was revealed to be just as smart, capable, and plot-relevant as any of them. Do the writers think that the show will be less interesting if Sarah is allowed to try her hand at being a mom or if Helena isn’t brutally murdering someone?

We all love it when the clones have to play each other—if the clones were finally allowed to take on different roles, wouldn’t it be as fun as an extended clones-playing-each-other bit? It’d be hilarious, it’d allow for character development, and more importantly, it would ensure that Orphan Black doesn’t retread the same ground in its upcoming fourth season. Orphan Black is fundamentally commentary on women vs the patriarchy, and to push its argument, all of its characters are meant to be well-rounded, realistically-written women—the opposite of the women we see in most media. But how far can Orphan Black’s argument go if their characters are not allowed to make different mistakes and have different triumphs? I guess we’ll have to wait and see what we find in Season 4.

3 thoughts on ““There’s Only One of Me”: Orphan Black’s Character Development Problem”