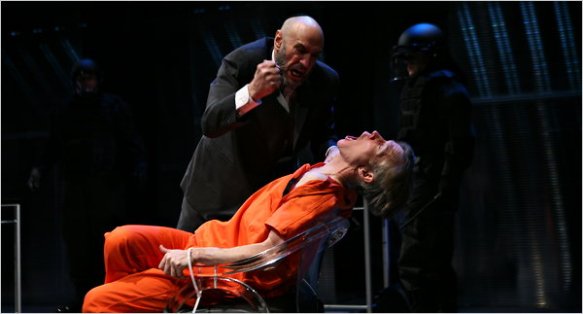 F. Murray Abraham as Shylock in Merchant of Venice at Pace University, 2011

There’s an association between Jews and finance that goes back a thousand years into European history. The natural strife between creditors and debtors made moneylending an extremely unpopular profession, so much so that the Third Council of Lateran in 1179 threatened Christians with excommunication if they lent money at interest—expanding a 4th century prohibition against usury. Jews were exempt from this threat—and prohibited from most other trades—and so Jewish communities in Europe filled this loathed-but-needed economic niche.

The union of ongoing bigotry with intense financial resentment laid the foundation for a permanent form of anti-Semitism in the Western world. The massacres of Jews by Crusaders in the 11th century dovetails with conspiracy theories about the 2008 financial crash.

These intense associations between Jews and financial trades permeate modern pop culture as well, so much so that even works by Jewish or philo-Semitic creators still reflect some of these old elements, whether or not they carry the hostility. These can be physical: 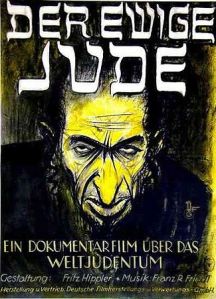 Long, hooked nose, sunken eyes, payot (sidelocks), swarthy or sallow skin, all connoted a malevolent, alien intruder to European society. Personally, Jews were portrayed as conniving, greedy, and fundamentally untrustworthy. Moreover, they were capable of corrupting innocent Christians, bribing them or otherwise rendering them financially subservient. Corruption carried a sexual element as well, arousing particular fears. We can see a number of these stereotypes in today’s pop culture. 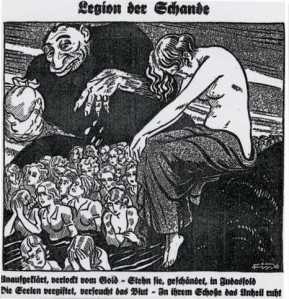 Oh, Griphook. J.K. Rowling’s goblins have some unfortunate connotations. Masters of the wizard bank Gringotts, the goblins seem to monopolize financial trades in wizarding England. Putting banking into inhuman hands already recalls the impression of Jews as aliens in European communities. Griphook’s pronounced nose is another anti-Semitic stereotype, made more painfully clear by the inclusion of “hook” in his name. Not just movie magic here, on Harry’s first encounter from the Sorceror’s Stone: “The Goblin was about a head shorter than Harry. He had a swarthy, clever face, a pointed beard and, Harry noticed, very long fingers and feet.” 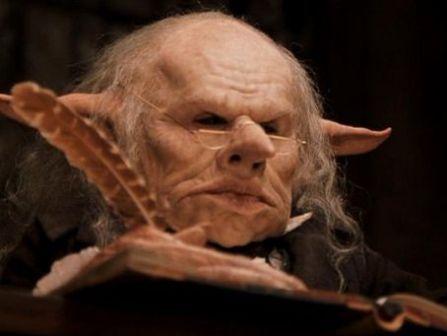 In Rowling’s defense, there does seem to be some realization that this characterization is problematic, and she tries to raise sympathy for the goblins. Bill Weasley hedges a little when describing goblins to Harry in the last book: “Dealings between wizards and goblins have been fraught for centuries … There has been fault on both sides, I would never claim that wizards have been innocent.” Goblins were chronically mistreated, and their distrust of wizards is earned. Voldemort hates them in particular—one Death Eater in Harry Potter and the Deathly Hallows comments, “Gold, filthy gold! We cannot live without it, yet I confess I deplore the necessity of consorting with our long-fingered friends.” Still, given the obvious analogs, that conflict is uncomfortably ignored. Maybe the story can be completed another day.

Outside of Harry Potter, goblins and other fantasy races fill similar social roles. The goblins of World of Warcraft share the outsider position, and interest in financial and trading professions. The game doesn’t muster much sympathy for them, mostly playing it as comedy. The Witcher does better, humanizing the dwarven banker Giancardi Molnar, and focusing on the pogroms—its word—dwarves face. 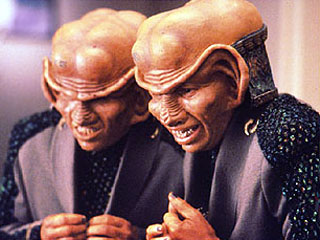 And now, the Ferengi. Fantasy doesn’t hold a monopoly on financial inhumans; aliens can stand right next to goblins. The Ferengi mostly get played for comic relief in Star Trek, their worship of “gold-pressed latinum” is ridiculous in a post-scarcity universe. They’re cheats and swindlers, involved in all manners of unsavory dealings.

Like goblins, they’re distinguished by their alien nature, compared to human, or at least, more human protagonists. Their business is distasteful, but not necessarily a threat. Still, they’re not part of polite society, and the thread of old Jewish stereotypes reemerges. Their exaggerated facial features are par for the course with Star Trek aliens, but the enormous, grotesque ears in particular seem like a swap for noses.

Their creators do deny the links to Judaism, with writer Ira Behr remarking, “The Ferengi are us. That’s the gag, the Ferengis are Humans. They’re more human than the Humans on Star Trek because they are so screwed-up, and they are so dysfunctional. They’re regular people. And that was the fun of that.” It’s certainly an intriguing possibility—but it doesn’t really land. Star Trek’s Jewish roots make the possibility of deliberate anti-Semitism extremely remote. Behr himself is Jewish, as are William Shatner, Leonard Nimoy, J.J. Abrams, and the senior producers for many of the series. In that context, it demonstrates how much stereotypes of Jews and moneylenders have fused, to the point where their Jewish history isn’t even discernible. 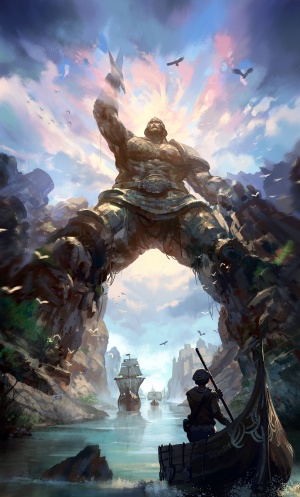 The Titan of Braavos, by zippo514

So, this is a twist—we’re going to talk about positive representation in Game of Thrones. George R. R. Martin carefully develops the Iron Bank, the dominant financial entity in Westeros and beyond, by identifying the cultural pressures which pushed Jews into finance without going to anti-Semitic stereotypes.

The easy first step is that the Iron Bankers are human, rather than monsters with exaggerated features, an immediate way to avoid obvious troubles. Likewise, Tycho Nestoris and the other bankers are not depicted as fanatical money-worshippers, but careful businessmen and women, whose pursuit of profits is basically normal human behavior. They’re practical, hiring Stannis to collect debts to the Iron Throne only after ongoing, failed negotiations with Cersei, rather than fetishistic.

However, they are still foreign, Braavosi rather than local to Westeros. Interest isn’t explicitly illegal in the Seven Kingdoms, but profit-seeking enterprises are distinctively gauche, at least for anyone who would otherwise have the capital. Land, not business, is the source of wealth for anyone in power, either Highgarden’s agricultural production or Casterly Rock’s gold.

Only Littlefinger deigns to invest his money in trades, which is treated as something below his position, even as a petty noble. His premier holding is Chataya’s brothel, run by another foreigner. The Baelish line actually goes back to Braavos, a link to foreign capitalists, but he is desperate to assimilate into elite society, and his mercantile wealth is only a means to that end. His greed is not for wealth, but power and status, which moves him out of common anti-Semitic stereotypes.

The cultural disapproval Littlefinger faces, not for running whorehouses specifically for investing at all, reflects the social pressures that pushed moneylending out of mainstream societies in Europe. It is simply not a gentlemanly pursuit—a conceit that ruined gentlemen through the days of Downton Abbey—and as such it gets pushed off to more marginal peoples. It also conflicts with traditional conceptions of masculinity, pushing such trades off further. Robert Baratheon and Robert Crawley are equally frustrated that their manly pursuits must go through men who spend too much time indoors. Although there is no explicit religious component, it is notable that Braavosi society does not follow the Seven Gods, preferring a mix of faiths, including the monotheistic Red God, an echo of religious elements in Europe. 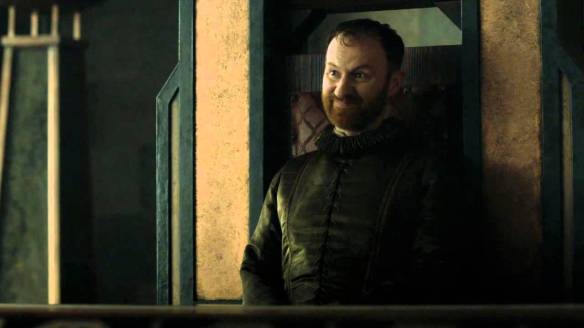 While Braavosi and the Iron Bank are not the protagonists of this story, they are entirely free of the scorn heaped on goblins or Ferengi. They are powers in their own right, who may occasionally deign to intervene. This echoes the historical rise of finance and capital, over the pseudo-medieval societies of Harry Potter and Westeros. To be sure, capitalism is frequently awful and desperately in need of change in the 21st century, but even Karl Marx saw it as a progression from feudalism.

So often have the sins of capitalism been laid at the feet of the Jews, so much so that our pop culture struggles to describe swindlers and usurers without resorting to the same kind of imagery that powered anti-Semitic stereotypes. Even Jewish writers describing the future can fall into the same traps. Thoughtful critiques of capital, money-lendng, banking and finance are enormously important, and perhaps intended with monstrous depictions of goblins and aliens. But to succeed, these need to realize the cultural history of their archetypes.

1 thought on “Oh, My Pop Culture Religion: Hebrews and Moneylenders”