Over the course of the last three weeks, I heard no shortage of wary, hesitant, lukewarm predictions about the newest Fantastic Four movie. It seemed like somewhere underneath all that flinching, everyone really wanted to get excited, but ten years had not been long enough to recover from the pain of the 2005 version of the same film. My reassurance, in every case, was “Well, I’m not worried. No matter how bad it is, it can’t be worse than the first one, right?”

Maker’s breath, but I was wrong. I was so very, very wrong. 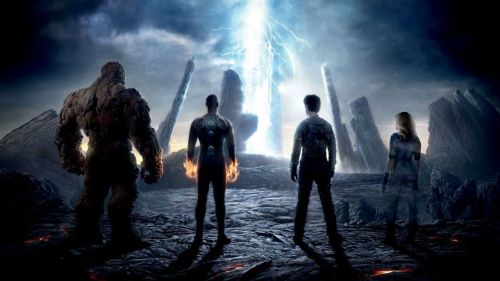 That’s it, that’s the fight scene.

Before we go any further, I must impart a disclaimer and a warning. The disclaimer is about me: though I have seen the first movie, I am not a reader of the Fantastic Four comics and have a fairly pedestrian knowledge of the characters and history. I am reviewing this film as a cinematic work independent unto itself. The warning is about the film: if you have any difficulty coping with body horror imagery, this film may be difficult for you to watch. Even speaking as someone with no real issues in that regard, the sequences of Reed Richards stretching are bizarrely detailed and anatomical, and the sensory experience of Ben Grimm being trapped in a body made of rock is very psychologically distressing. This one incongruous thing is perhaps the only thing the film does well, and the credit for that success certainly goes to the actors.

The all-around competent casting, however, didn’t manage to drag this film out of the quagmire of its own oozing, sucking suckyness. The pacing was abysmal, the characters’ motivations were nonsensical, the plot wandered aimlessly, and the scenes were edited together with all the care of a kindergartener wielding safety scissors and tape. I alternated between being bored to tears and frustrated to the point of shouting.

The film’s first problem is suspension of disbelief. A certain degree of scientific fudgery is acceptable in superhero movies, but the unnecessarily long development-of-dimension-hopping-technology act is contrived. A ten-year-old Reed Richards builds a working dimensional portal in his garage with scraps from Ben Grimm’s family’s junkyard, something a team of scientists and engineers led by the Storm family are unable to do properly with millions of dollars in resources. Once Reed’s machine is developed for exploratory use, the rules for operating it change depending on what is convenient at any given moment. It seems to require a team to launch it from an external control panel, but hours later Reed somehow launches it successfully while inside it. When it comes time to bring it back, however, Sue Storm has to initiate launch from the lab. 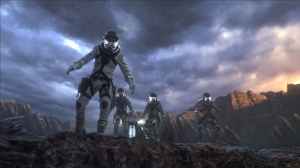 What could possibly go wrong?

Reed, Johnny Storm, and Victor von Doom – who was brought onto the team for his cool guy computer skills – all demonstrate a mind-blowing level of idiocy. Murphy’s Law just takes the day off and lets the “scientists” relentlessly screw themselves. They recklessly commandeer untested technology effectively for a joy ride, they drunk-pilot a spacetime machine, roll around in the dirt in an alternate dimension, and stick their hands into mysterious glowing green goo. These failings in themselves would not have been enough to sink the film—superhero movies have been guilty of this sort of thing in the past—but this was, in fact, the least shitty part. It was all downhill from there.

After a botched return journey from the alternate dimension, Reed, Johnny, Sue, and Ben wake up in some kind of government facility, exhibiting powers that all seem appreciably horrifying in context. Victor was left behind in bizarro-world when the machine returned to Earth, and Sue was effectively a bystander to the whole event. She wasn’t invited to the drunken idiot-romp through a dimensional portal, she just happened to be near a computer when the buttons to bring the boys home needed pressing and got caught in the fallout. Reed escapes the government facility, disappearing to Panama to do… something with scrap metal that is never actually explained.

Yeah, I’d be pissed too, the rest of them get to be hot and have cool powers.

The other three are trained to be used as human super-weapons, while the suited Government Goons dangle the lure of a “cure” in front of them and start rebuilding the dimensional portal with the hope of making more superfreaks. They decide they need Reed to make the portal work again, so they track him down and send Ben to retrieve him. Ben, understandably, has had the most difficulty coping with his mutation, which is by far the most drastic. He is withdrawn, debilitated by depression, and suffering from chronic physical pain. He blames Reed for what happened to him, rightly so in my opinion, because Reed is an irredeemable idiot who needlessly involved a reluctant Ben in his horrible decision-making.

Ben’s was the only genuinely compelling character development thus far and the writers manage to ruin that in short order. Within about four hours of Reed’s return, he and Ben are pals again, and by the end of the film Ben is evidently just fine with being a rock monster. His trauma is never brought up again. This was the most infuriating failure of the story for me. The narrative focused most heavily on Ben’s plight after the inter-dimensional accident, leaving the audience invested in his pain and distress and leading us to expect a resolution, or at least steps toward one. Nope. Everyone was too busy having a lackluster fight with caped, brooding, nihilist Victor von Doom.

I’m mostly made of plastic but hey, I’m cool with it.

Yes, with Reed’s help (which he apparently has no reservations giving, in spite of what happened last time he went dimension-hopping) they rebuild the device and send a team of redshirts through to do “science” that an unmanned rover could easily have done. Said team discovers Doom wandering around in a daze with his space suit grafted to his body, wearing a cape. A cape. They bring him back to Earth and try to care for him, but he insists that humans have screwed up the Earth enough and have no right to plunder his awesome new home dimension. He kills a bunch of people, teleports back to bizarro-world, and uses his phenomenal cosmic power to turn the dimension-hopping machine into a rapidly expanding black hole.

This begs the question: if he likes bizarro-world so much and has virtually unlimited power, why did he allow himself to be brought back to Earth in the first place? Why was he limping around weirdly when he could have just destroyed the transport pod and all the people in it as soon as they showed up? We just don’t know.

You can tell we’re a team because we’re standing next to each other.

Anyway, the team follows Doom back to bizarro-world and engages him in a slow, uninspiring boss fight that I honestly did not realize was supposed to be the climax of the film until it was nearly over. They spend most of the battle literally weighed down by huge, sticky rocks: a brilliant visual metaphor for the overall sensation of watching the film. Doom has the power to literally create black holes, but four people with poor chemistry and no cohesive strategy whatsoever defeat him with… punching and “friendship”.

In spite of being effectively prisoners/science experiments before the fight with Doom, upon their return, the team literally announces to the Government Goons “you work for us now”. The Goons shrug and provide the team with a multi-million-dollar secret facility and total autonomy. They are all friends now. Everything is fine. All that remains is for them to awkwardly say the title of the film.

There was a great deal of hullabaloo about the casting of Michael B. Jordan as Johnny Storm, a character who is white in the comics and the previous incarnation of the film. I was given pause somewhat by the fact that – out of the three members of the team with skin – the role they chose to cast a Black actor in was the loudmouthed, hotheaded delinquent who joins Team Dimension-Hop only because he crashes his car street racing and is working off that debt to his father. I know Johnny Storm has always been characterized this way, but considering the long, sordid history of casting young Black men as loudmouthed delinquents in films, it calls the filmmakers’ motives into question to some degree. They could have at least made Johnny more multi-dimensional, but Johnny and Sue’s character explorations both take a backseat to the relationship between Ben and Reed, which the writing just screws up anyway.

As for Sue, there was at least a certain charm in how genuinely awkward, quiet, and introverted she was, a refreshing departure from the flirtatious “hot girl scientist” trope. Though there is a bit of half-assed nerd flirting between her and Reed, the only real suggestion of her as a romantic interest is when Doom says something in his Villain Monologue about how they should have been together or some such tripe. Unfortunately, Sue is the only named female character in the entire film, and the only female character who appears in more than one scene. Also, as mentioned before, she is largely a bystander whose involvement in the plot is minimal. She claims to have designed the space suits (even though her specialty is apparently coding and mathematical pattern recognition) and in one scene she tracks Reed’s IP when they are looking for him in Panama. Besides that, her only role is to mumble slightly, look afraid of things, and fill the slot as The Female Character. She doesn’t even get invited on the idiotic drunken space romp.

While the first Fantastic Four was narratively weak and overblown to the point of being hokey, its one redeeming factor was a sense of fun and vibrancy. It was, if nothing else, a tolerably watchable, resoundingly mediocre film with a handful of funny moments that I would be willing to leave on for background noise as I cleaned the house or something. The new film is flat-out unwatchable. It is exhaustingly frustrating, weirdly psychologically stressful, devoid of anything resembling appropriate dramatic tension, and to top it all off: a throbbing eyesore. The visual effects are overdone but unrefined, and there is very poor cohesion from one scene to the next. I can only hope that this train wreck does not set the careers of the very capable actors involved too far back. I do not want to see or hear any part of this film ever again and I hope it fades into obscurity and is forgotten as soon as possible.

4 thoughts on “Pan’s Review of Fantastic Four: I Watched It So You Don’t Have To”