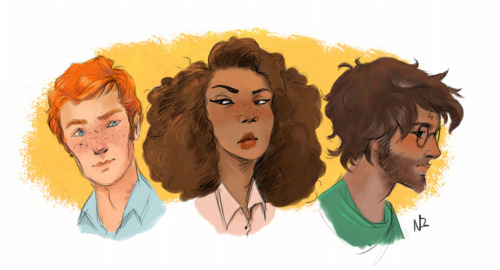 I was into a lot of geeky things as a kid, but Harry Potter was my number one fandom, and back then, the Harry Potter stories could basically do no wrong. Now, as an adult, I realize that there are definitely things in Harry Potter that were problematic or simply things that I think J.K. Rowling could have done better, both from a writing and from an intersectional feminist perspective. We have already discussed on this site how problematic it is that many of the characters that are analogous with discrimination are all white, cisgender, heterosexual, and able-bodied, and relatedly, recently I have been seeing a lot of racebent pictures of Harry Potter characters in the fandom. It seems the two most popular are Black Hermione and Indian or biracial Harry, both of which I love, but it got me thinking about the lack of any real discussion on the intersectionality of discrimination in Harry Potter.

Part of the issue with the Harry Potter series is that despite all the worldbuilding J.K. Rowling does, we still don’t know much about the wizarding world and its history. Were women ever discriminated against in the wizarding world? There is some indication of sexism in the books. Slytherin’s Quidditch team seems to have only male players, while all the other teams are co-ed. Narcissa’s and Bellatrix’s marriages seem to be arranged. While Narcissa and Lucius appear to care about each other, Bellatrix is obsessed with and in love with Voldemort, and there is very little mention of her husband in the books. Bellatrix literally spends no single moment in the books conversing with her own husband, which is odd, and makes me wonder if their marriage was one of obligation.

As far as race goes, there is no indication that the few people of color we see are discriminated against in the wizarding world. However, their absence in certain areas, like the absence of women that I mentioned earlier, is telling. But considering there are so few people of color in the Harry Potter series, it’s hard to tell if that is an indication of discrimination in the wizarding world or if JKR’s own white privilege is causing the issue. And, of course, there are no queer people (other than Dumbledore, retroactively) and the lack of disabled characters brings us to a whole other issue. JKR discussed how wizards can cure basically any non magical illness or disability. She explained:

I decided that, broadly speaking, wizards would have the power to correct or override ‘mundane’ nature, but not ‘magical’ nature. Therefore, a wizard could catch anything a Muggle might catch, but he could cure all of it; he would also comfortably survive a scorpion sting that might kill a Muggle, whereas he might die if bitten by a Venomous Tentacula. Similarly, bones broken in non-magical accidents such as falls or fist fights can be mended by magic, but the consequences of curses or backfiring magic could be serious, permanent or life-threatening. This is the reason Gilderoy Lockhart, victim of his own mangled Memory Charm, has permanent amnesia, why the poor Longbottoms remain permanently damaged by magical torture, and why Mad-Eye Moody had to resort to a wooden leg and a magical eye when the originals were irreparably damaged in a wizards’ battle; Luna Lovegood’s mother, Pandora, died when one of her own experimental spells went wrong, and Bill Weasley is irreversibly scarred after meeting with Fenrir Greyback.

While this might be good for illnesses like cancer, also applying this to disabilities is extremely problematic. Maybe people born in the wizarding world wouldn’t know the difference, but Muggle-borns or even half-blood wizards born paralyzed or with Aspergers or other disabilities could be highly offended. “Curing” disabilities, which is portrayed as evil in other fandoms such as Welcome to Night Vale, in Harry Potter is portrayed as an advantage wizards have over us. So we can assume that people with disabilities, especially non-magical disabilities, would be viewed as strange and maybe even looked down on.

Despite this lack of representation and very little mention of discrimination, the Harry Potter books actually are about discrimination, just a different type of discrimination. In Harry Potter, blood status, basically being a pure-blood witch or wizard, is what’s viewed as important. On top of this, various magical races such as centaurs, house elves, and goblins, among others, are also discriminated against by wizards. But what I have always found strange is that Harry Potter, along with many other forms of media, rarely ever discusses intersectionality — that is, the way various forms of discrimination intersect and cause problems for different groups. There are only two real cases of this that we see in the Harry Potter books and that is through Hagrid and Madame Maxime, and through Remus Lupin.

Hagrid’s half-giant heritage immediately puts the wizards who meet him on edge. Tom Riddle, aka Voldemort, frames Hagrid for murder. The headmaster at the time is quick to believe this; because Hagrid is half giant, he is viewed as both violent and stupid. Hagrid is denied not just his right to an education, but his wand is broken so that he can no longer do magic. This is a shame, because Hagrid’s still a person who is just as capable and deserving as anyone else, and also just as resourceful and smart. When Ron breaks his wand, he is barely able to use it. Hagrid, however, keeps the broken pieces of his own wand in an umbrella and is still able to perform magic with that pretty successfully. Hagrid is saved from going to jail thanks to Dumbledore and given a job at Hogwarts. However, even then Hagrid’s job always is often in jeopardy from pure-blood wizards, like Lucius and Umbridge, who don’t like him.

Madame Maxime also shows us some examples of this. She seems to be treated better

than Hagrid. Despite also being half giant, this could be a form of respectability politics. Madame Maxime appears to be much more cultured than Hagrid, so she could be viewed as not acting “like” a giant. She also pretends that she doesn’t know what people are talking about when they refer to her as a half giant. When Hagrid brings up her heritage, she becomes angry and tells Hagrid she is just big-boned.

Lupin too faces this kind of discrimination. He’s almost unable to go to Hogwarts because he’s a werewolf, and as an adult is unable to hold a job because of this as well. Later on, Lupin is fired from his job at Hogwarts when it’s revealed that he’s a werewolf. Here, we did have an opportunity to see some intersectionality, but since we don’t know the blood status of any of these characters, we don’t get the chance. I don’t believe we are ever told the blood status of Hagrid’s father or Lupin’s and Madame Maxime’s parents, but it is safe to assume that that any magical creatures who are also Muggle-born or half-blood would be even more looked down upon.

Which brings me back to the actual discrimination we see in our own world and how interesting it would be to see a real discussion of intersectionality in media. Harry Potter exists in a magical world, but that magical world is still inside our own normal Muggle world. Is the wizarding world influenced by the same kinds of discrimination, and if so, how does that affect people? Would the Black Blaise Zabini, despite his pure-blood status, be viewed as lesser than white pure-bloods? If Hermione were a queer woman of color and a Muggle-born, would she be viewed as even more “dirty” than a white heterosexual Muggle-born? Would a Black werewolf be viewed as even more violent and animalistic than a white werewolf simply because they were Black? It’s interesting to consider. In our world, various minority groups are looked down upon for a variety of reasons and some groups have less or more privilege than others. Our society may discriminate against a white gay man for being gay, but he would often still be treated better than, say, a trans woman of color.

Genre fiction seems to like discussing discrimination and uses it a lot in storytelling, but very rarely do we actually discuss how different types of discrimination and privilege intersect and affect people. The Harry Potter series could have taken more opportunities to do this, but for whatever reason, JKR did not really explore these issues. I think fantasy, and genre fiction in general, could truly benefit and have a stronger message by discussing intersectionality more often.

8 thoughts on “Harry Potter and the Lack of True Intersectionality”