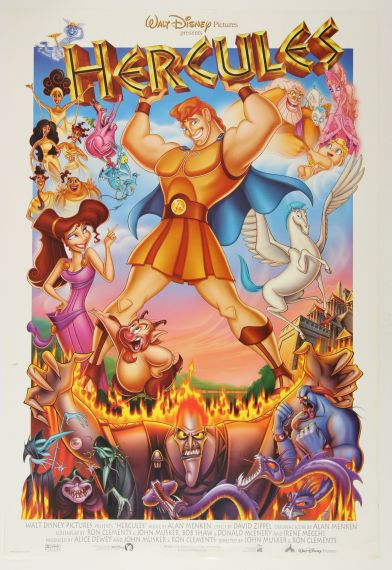 Ah, Hercules. If Harry Potter was my older childhood, then Disney’s Hercules was my younger childhood, as it came out in 1997. It was one of the few new movies that I didn’t have to wait for my local Blockbuster to catch up on (unlike The Last Unicorn). I was super hyped about it from the moment I first heard it was coming out. Why? Because it was full of Greek people—just like me! See, representation matters!

My parents encouraged this, because even though modern Greeks share hardly anything culturally or religiously with ancient Greeks anymore, they are very proud of their classical heritage. Most Greek kids learn a ton about ancient Greek history and mythology from their families. So my parents had no problem letting me see this movie in theaters and watching it again and again once it came out on video. It’s the story of, well, Hercules, a super-strong son of Zeus raised on Earth who seeks to become a True Hero, and must fight against the evil Hades, god of the Underworld. It’s going to be hard to take off my nostalgia glasses for this one, but I’ll give it a shot in my spoilerific review below!

Disney’s Hercules, it turns out, barely resembles the original myth at all, which my parents were quick to tell me. In Disney’s version, Hades wants to lead the gods in place of his brother, Zeus. He’s planning a devious coup, but when the Fates tell him that Zeus’s baby son Hercules could stop it all, he poisons Hercules, making Hercules mortal. Since mortals can’t live on Mt. Olympus, the home of the gods, Hercules is raised by human parents on Earth. When he finds out his true parentage, though, he sets out to earn back his godhood by becoming a True Hero. Along the way he is trained by the satyr Philoctetes and falls in love with Obligatory Love Interest Megara.

This movie is so different from the original myth that it ends up seeming like a Christian story instead, what with the fight against Hades, the representative of death, and a scene in which Hercules, a son of a god, is literally deified after he emerges from the Underworld having saved the soul of the one he loved. But… that’s another post entirely. Suffice it to say that Disney scrubbed the myth so it was squeaky clean of all of its marital infidelity, god-induced madness, and spousal homicide. As a kid, I knew all these differences from the original, but I loved the movie anyway. And…you know what? I kinda still do, despite the way I’m about to rip into it!

As an adult, when judging the movie upon its own merits, it… is so campy and cliche, oh my goodness. The characters can’t go two sentences without spewing out some trite phrase, and the plot proceeds exactly as you’d expect and is also full of holes. The musical choices are… interesting. While I loved Herc’s “Go the Distance” and Meg’s “I Won’t Say (I’m In Love)”, I always found the Muses’ songs to be strange and hard to follow. The Muses in this movie are all Black women (some of the first Black women to ever appear in a Disney animated movie, which is cool) who narrate the story to you Gospel style. While watching the movie with subtitles, I realized why I could never catch some of their lines when I was a kid. There is literally a line that goes, “smooth as sweet vermouth.” Whaaaat? And occasionally, they sing out of tune. I suppose the Gospel music adds a bit more variety to the heroic, epic soundtrack, and perhaps it makes this sort of “foreign” story seem more “American”, but honestly? Looking at it now, it just seems like a way to include characters of color without actually having to include characters of color.

See, on the one hand, the Muses get to play the role of the Greek chorus, a venerable and integral part of Greek drama in which a group of actors provides the audience with background information, reactions to events, and a sort of moral commentary. Basically they tell you what you’re supposed to think of characters and events. They speak with authority. On the other hand, though, members of the chorus are undifferentiated from each other, and are not really characters that have an effect on the plot. The Muses in Hercules all have slightly different personalities, but they are never called by name, and it’s hard to tell the difference between most of them. Their only effect on the plot is to convince Meg that she’s in love, but I think she could have figured it out without them. They are not true characters with agency.

Meanwhile, all the rest of the characters are white—or if they’re gods, then they have glowing skin in an assortment of unrealistic colors. 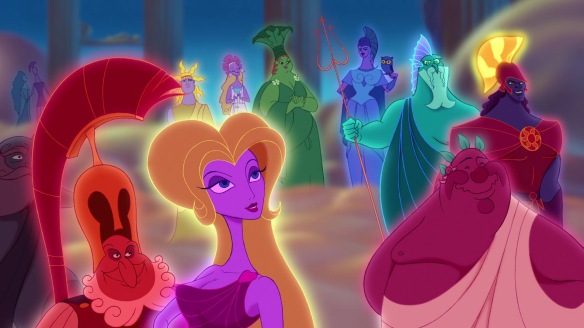 Look at all these gods with colorful skin that is not Black!

Thebes, the big city in the movie, is slightly cosmopolitan; I spotted two people in the streets who looked Egyptian and Babylonian, but both had pale skin. If the creators of Hercules had wanted to include better racial representation in their movie, then they would have done better by actually including characters of color, rather than relegating them to the role of hive-mind commentators.

How does the movie treat its female characters? Well, it doesn’t pass the Bechdel test; the only named female characters are Herc’s mother Hera, Meg, and Herc’s adopted mother Alcmene, and they never talk to each other (and even if they did, let’s be honest; they’d talk about Hercules). There are other goddesses, but they’re never named, nor do they get lines; the Muses, as already mentioned, don’t get names either, and only ever talk about Hercules anyway. And the film doesn’t pass the Mako Mori test either. Meg’s character arc revolves entirely around Hercules. She’s the typical overly-sexualized femme fatale–but this kind of female character portrayal was unusual for Disney at the time. We’d been used to seeing perfectly sweet and well-behaved sexless princesses. A character like Meg conveys the message that just because a woman has sexuality and chooses to exercise it, she is not automatically an evil seductress. Hades tries to use her as one, but she never wants to be used in such a way. She fights against the advances of Nessus the centaur, and she doesn’t want to betray Herc when Hades sends her to find out his weakness. However, she tries to be an “independent woman” and avoid the pitfalls of romance like the one that led her to sell her soul to Hades, but she just can’t because Hercules, her Wonderboy, is too perfect and irresistible. Because he’s the Hero and she’s the Love Interest, after all. If you’d like a deeper dive into the female characters in Hercules, with a particular emphasis on their unrealistic body types, check out this great article from Feminist Disney. 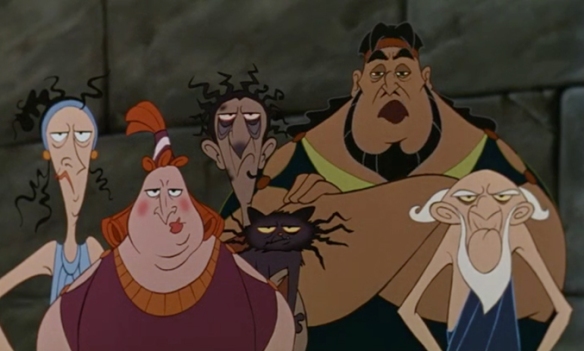 Well… at least the women in the movie’s Thebes were more free to travel in the open and interact with men than the women of Ancient Greece were… but that’s a super low bar, Disney. You can do better.

Finally, there’s the weird smattering of Yiddish that ended up in the script. Only Phil, the half-goat satyr, and Hades, the villain, use words like “oy vey” and “schlemiel”. It’s unclear to me whether these characters are meant to be coded as Jews (in which case—super problematic!) or if it just reflects the influence of Jewish writers on the script. Commenters, any insight on this?

So, you may be wondering, is there anything that I still like about this movie? Well, yeah. It left me grinning more often than it made me roll my eyes. Hercules, despite being the typical white cishet male hero, was a likeable and relateable character. As someone who’s felt left out before, I could relate to his desire to “find where he belongs,” as he sings in “Go the Distance” (best song). He’s naive and he lets the whole hero thing get to his head, but he’s ultimately earnest and good-hearted, which is what makes him a True Hero, after all. I like that after he made that bargain with Hades and lost his strength, he had a chance to fight using his wits, to show that he’s got some brains as well as brawn (I don’t like that the only way Meg could contribute to that fight was by dying, but getting hurt to break Hades’ bargain so Herc could get his strength back might have been her plan all along…). Meg always struck me as not just pretty, but clever too, which was important to me growing up. The message that “A true hero isn’t measured by the size of his strength, but by the strength of his heart” is ultimately very positive (even though it’s your typical cliche Disney lesson-of-the-day). And, of course, the fast-talking con man Hades is just a delight to watch. Everybody loves to hate him. You know it’s true!

This scene never failed to make my sister and me giggle uncontrollably. (gif from disney.tumblr.com)

This was my first favorite story, the first one I was truly obsessed with. For that reason, I’m still willing to forgive all the flaws I enumerated above. I don’t know if you will be, though, dear readers. What do you think about Hercules? Let me know in the comments!