We have become dragons. But not in a cool way.

Being a member of the geek community is full of ideas, debates, and experiences, but underneath it all, we are a community of things. Books, comics, toys, games, discs, shirts, accessories, posters, and more. Some of these are fun, useful, or deeply meaningful. But I’m not talking about those things.

I’m talking about the rest of it. The piles of once-read novels by mediocre authors creating licensed works. The keepsakes from a long-forgotten convention. Video games that only live because of the phrase “backward compatibility.”

In other words, we all curl up at night on our hoard of valuable, useless junk. Like a dragon sitting on a pile of gold coins you can’t spend on Amazon. 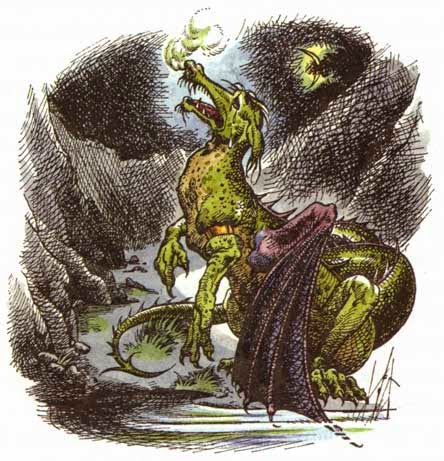 Illustration by Pauline Baynes in Voyage of the Dawn Treader

There is, of course, a very cynical story to be told here. Geeks are consumers, after all, and the word “licensing” transforms a character into a billion-dollar enterprise. Someone is selling us all these tchotchkes, after all, and making money. We’ve discussed the consumerist element of geekdom here before.

Each object will one day leave us. It will be sold, lost, destroyed, thrown out, or given away. In the end, of course, we can’t take it with us. But for all the fervor that geeks accumulate our hoards, we don’t know how to get rid of them.

When you’re a geek, these possessions are more than just their function, they are the badges of a certain identity. A curated, particularized identity which marks dozens of affiliations each with a unique community. A novel is not just a book—a story to be read and enjoyed—but instead, a link to fellow fans, and a nod to any visitors who may spot it on your shelf. A movie should be just a disc and case if you never going to watch it again, but in a geek hoard, it’s a signal of fandom, and a message to all visitors of where you belong.

That’s all fine when you’re fifteen, but as an adult, the hoard can grow out of control. Disposable income means that each obsession generates a pile, rather than an item. Worse still, tastes develop and advance, and suddenly a careful collection represents a memory rather than an interest.

And then you move. You load these things into boxes, transport the boxes, and then move the boxes to another home, unopened. It overflows through your living spaces.

So where is it all supposed to go? How do you throw away these physical expressions of your own identity?

The answer is far too simple. You already know what it is. You just do it. You throw away these things. You decide what you’re going to use again, you figure out what your friends might want, and you figure out what can be donated. If you’re creative, maybe you can repurpose things. But most of it, of course, will just go to the trash, like anything else.

I’m sorry for this picture. It really undermines my point.

And that’s okay! We don’t forget what we love—what kind of fan needs a t-shirt to remember they memorized the first five seasons of Buffy the Vampire Slayer? People don’t spend nearly as much time flipping through your DVD collections as you think they do. They spend even less time thinking about whether or not you’re the type of person who loved Final Fantasy VIII for their PS1.

And if you really do want friends and strangers to evaluate all your various hobbies? Just send them to your Tumblr.

4 thoughts on “The Nerdery of Things”