I don’t know if I would say that Saga is my favorite comic, but that’s probably because it’s just so good, and so consistently so, that it’d be like saying that I like breathing air. I take it for granted that Saga is going to be one of the best comics out there every time I pick up a trade. The fifth trade collection just debuted this week and it got me thinking about motherhood and characterization. The main characters of the story are Alana and Marko, the parents of our narrator, Hazel. Alana and Marko are from Landfall and Wreath, respectively, a planet and its moon that have been at war for as long as anyone can remember. The fact that they’ve fallen in love and had a baby has put them at the top of both their homelands’ hit lists, and they’ve been on the run for the entirety of the story, trying (and failing spectacularly) to find somewhere safe to raise their child.

One of the things that I love about Alana is that, while she is absolutely and fiercely dedicated to her daughter, it shows in a way that is consistent with her character. She will fuck up anyone who threatens to lay a hand on Hazel, but she’s not the best at motherhood or at being a decent person, and her best-laid plans too often go awry. She’s also still got interests and desires outside of simply raising her daughter; she didn’t stop being a person when she started being a mother. She loves the trashy romance novels that helped her bond with Marko when they first met. She developed a drug problem while trying to support her family on the run. She felt miserable and unsexy when she and Marko tried to have sex while she was pregnant. She can fire a rifle and curse a blue streak but still struggles to get along with her in-laws. In fact, Alana as a character is more in line with what we usually see of fathers in pop culture.

Most of the time, mothers in pop culture are nothing more than that. They exhibit maternal affection if they’re a good character and alive, provide motivation to the protagonist if they’re a good character and dead, and supply a villain if they’re evil, because nothing is worse than a bad mother. It’s the fathers who get to be interesting and do things and have characters and interests and skills outside of their children. Look at the Weasley parents. Arthur is a goofball, obsessed with Muggle artifacts; he tinkers in his shed and complains about the office. He is a father and he clearly enjoys being one, but his fatherhood is not the be-all, end-all of his character. Molly, on the other hand, as much as I love her, is utterly a mother and nothing else. We very rarely see any aspect of her character that isn’t related to childcare or housework; even her crowning moment of badass is one of motherly vitriol—”Not my daughter, you bitch!” As Mikely said in a previous post on motherhood, she passes out sweaters and hugs, mostly.

And… not to pick on good ol’ J.K., but Narcissa and Lucius Malfoy exhibit the same problem. Lucius is motivated by a ton of different things and we learn lots about him outside his fatherhood of Draco, but Narcissa’s only ever looking out for her family—to the point where her love of her son is what saves the world in the end.

The most personally disappointing example of this for me was the sad case of Nana Sawada. In the manga Katekyo Hitman Reborn!, protag Tsuna is training to be a mob boss with a tutor who lives in his house, and people are constantly attacking him. His father is the head of the mafia family’s advisory group, and appears after years of being away to help train and coach his son, but often must deal with other mob stuff. 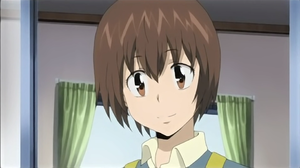 Nana, his mother… is his mom. She takes care of everyone who comes into the house (and Tsuna collects a lot of homeless friends), she is good-naturedly surprised when bad stuff happens to the property, and we never learn anything else about her. I was desperate by the end of the series for a big Nana-related reveal. It simply didn’t make sense that she was just an everyday housewife with a mafioso husband and son who knew nothing at all about her family’s activities. I waited with bated breath to learn more about Nana, but the series ended with no backstory for her.

This phenomenon is terrible on a number of levels, the most obvious of which is because this is sexist as hell. No one talks about fatherhood in the same frame of mind as they do motherhood, essentializing it into some magic power that gives men strength to overcome bad things and aggrandizing it into the most important and special thing a man can do, and when men do become fathers, they get to keep the character they had beforehand. That’s why it’s so important to have characters who are mothers in a way that’s organic for their character. Pop culture needs fewer mothers who are perfect and more mothers who are people—it’s time we caught up to the number of cool dads out there.

4 thoughts on “Sexualized Saturdays: Motherhood vs. Fatherhood in Geek Media”