Between late 2012 and early 2014, in what was undoubtedly one of the best ideas ever (right up there with Kinder Surprise Eggs and the bendy straw), the Bioware gods saw fit to create an original Dragon Age comic series. The three-part comic miniseries stars characters from Dragon Age: Origins and Dragon Age II, as well as several original supporting characters, and follows King Alistair of Ferelden and a few new friends of his on a quest to find his father, who is missing and had been presumed dead.

Accompanying Alistair (who featured prominently in Origins) are Varric Tethras and Isabela, who were companions/party members in Dragon Age II. The trio follows a trail of clues through Thedas to help Alistair in his quest, becoming caught up in the centuries-old Tevinter-Qunari conflict and getting trapped in the magical limbo known as the Fade. In addition to the familiar characters and settings, the series introduces several new people and places and expands on the world already established in the games. While the plot and characters are definitely more appealing to someone who is already at least somewhat familiar with Dragon Age, the storytelling and art are solid, and it is not strictly necessary to have played all the games or played all of them in their entirety to follow the plot.

Spoilers for the whole Dragon Age comic series under the jump!

The story is fairly uncomplicated, and simply traces Alistair’s investigative journey from Antiva to Tevinter to Par Vollen to a creepy castle in the middle of nowhere where his father is being held captive for crazy, evil blood magic rituals by a caped man with a pointy beard. The quest is almost a MacGuffin, as the character development throughout is the real meat of the story. We get the opportunity to see both fleshing out of existing characters and expansion of new or extremely minor characters. Because Dragon Age games are so character-driven already, and because the comics were clearly aimed at the games’ players, I don’t really consider the simplistic quest line or the slightly two-dimensional villain to be genuine failings.

Each of the three sections of the miniseries is told from the perspective of one of the three main characters, first Alistair, then Isabela, then Varric. This narrative lens is something we don’t get in the games, and it is utilized well in the comics. We get to see a bit of Alistair’s feelings of uncertainty and inadequacy now that he has the weight of rule on his shoulders, and it is clear that part of his interest in finding his father is from a fear that he doesn’t deserve or isn’t capable of being king. Isabela’s portion of the story explores the conflict she feels between her fierce conviction to her own freedom and the moral choices she has had to make to maintain that freedom. Being a pirate isn’t all cakes and roses, and though she insists that she loves her life and has no regrets, some of her internal musings suggest otherwise.

Varric’s portion of the story also has themes of morality and regret, but given that Varric is actually a writer by trade, his notions are more philosophical, and where Isabela runs from her feelings, Varric faces them and grapples with them. Each of the main characters’ personal emotional journeys come to a head during a sequence in the Fade, a sort of alternate dimension where dreams are shaped. Each character experiences a hallucination that reflects what they have been struggling with throughout the story. Varric finds himself back home with Bianca, for whom his crossbow is named, revealing for the first time that she is actually a real person Varric is in love with, and a real person who is betrothed to someone else. Varric is the first one able to escape his Fade-illusion and goes on to find and rescue Isabela, who is trapped in a nightmare-like vision where she has joined the fanatical and rigid religious institution of the Qun and is entirely subject to the whims of others. Alistair is likewise enthralled, but he is hunting with his father and brother in an idyllic alternate history where his father is still king and his brother is the heir to the throne.

Mae is my new mom, let it be known.

While the main characters’ storylines are definitely worthwhile, I seem to have become a little bit obsessed with Maevaris Tilani, a character introduced in the comics who is referred to in the subsequent game Dragon Age: Inquisition. Although Krem in Inquisition is the first in-game trans character, the second and third portions of the comics feature Maevaris, a trans woman who holds a seat in the magisterium in Tevinter. Both Krem and Dorian’s dialogue in Inquisition suggest that attitudes toward trans people in the Imperium are less than kind, so it is unclear exactly how Maevaris attained such a position of power. Regardless, the handling of her character and status is exceptionally compassionate, and demonstrates one of the few cases where a trans character’s existence does not revolve around their being trans. While it was certainly touching and equally important to hear Krem talk about how being trans had an impact on his life, Maevaris is only revealed as trans toward the end of the third arc, when Varric finds her partly disrobed after having been tortured. In this portion of the story Varric is acting as narrator, and after offering her his jacket, his only comment on the matter is “Maevaris Tilani is one of the best of us, she’s a mage, and she’s family, and that’s all I’ll say.” The two of them then go on to traipse through the Fade, regrouping with their party members, killing bad guys, and generally getting on with the narrative. 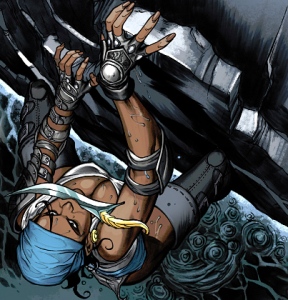 Here to fuck shit up.

Because the story involves the Tevinter- Qunari conflict, the comic series has the distinct honor of being the first piece of Dragon Age media to feature a female Qunari character. Now, I generally try not to nitpick too much about absurd female costumes and body poses in comic reviews. While rampant sexualization is definitely a serious problem in the industry, it is so ubiquitous that pointing it out in every single issue of every series becomes a bit redundant. But I’m compelled to comment on it in this case because the comic artists themselves seem aware of it.

Simply because the omnibus version of the comic series was cheaper, I ended up with a book that included artists’ annotations on many pages. The annotations in The Silent Grove actually point out a panel where Isabela climbs a rock face sopping wet, and Alexander Freed notes “This scene—featuring a scantily clad, dripping wet woman who tends to flaunt her sexuality—could easily have come across as exploitative, but Chad did a lovely job portraying Isabela as purely focused and deadly.”

It’s an interrogation, I swear.

While I would agree with that analysis in this case, as the scene is pretty well-executed, the same self-awareness doesn’t seem present for other parts of the comic, even though the same artist illustrates the entire series. The fighting and interrogation scenes with the female Qunari Rasaan in particular strike me as very excessively sexual, and given that Rasaan was an original character created for the comics, as well as the first female Qunari ever shown, her character design is a bit questionable. While male Qunari are enormous, horned, grim-faced and gray (or in Sten’s case, sort of orange), Rasaan seems strangely more humanoid, with a softer face and more pinkish-colored skin. That and the fact that she is wearing an unreasonably minimal version of Qunari light armor suggests that—whether it was deliberate or not—choices about her appearance were designed to make her more palatable to the straight male gaze. That said, Rasaan was also an interesting and three-dimensional side character who I became rather attached to, so I can’t be critical of the writing, but seeing her perfect Qunari boobs defy physics by not escaping from the tiny bandages covering her nipples was worthy of an eye-roll.

Overall, speaking as a Dragon Age fan, the series was quite engaging and enjoyable, and while it had its flaws, I consider it worthy of Bioware’s rather famously progressive storytelling. It’s clear that the creative team for the comics had a great deal of passion for the subject matter and put care and consideration into how they handled each character. The comic also gives some tidbits of information that were later referenced in Inquisition, so getting those snippets of backstory were a lot of fun. The comics aren’t widely available in stores anymore, but the omnibus is very inexpensive on Amazon and definitely a worthwhile investment for fans of the games.