It seems like forever ago that I reviewed the beginning of Gail Simone’s Red Sonja run. (It was actually only about a year and a half, but that’s like an eternity in blog years.) I was slow on the draw with the series—I didn’t pick it up until the second printing of the first issue came out—but I fell pretty hard for it once I started reading it. Simone was originally only signed on to do six issues, but the series proved so popular that she ended up staying on through issue #18, as well as orchestrating and writing a huge event called Swords of Sorrow that featured Sonja and the rest of Dynamite’s leading ladies like Vampirella and Dejah Thoris. While I know that Simone has her own life to lead and will certainly still be providing us with excellent stories elsewhere, it was bittersweet picking up issue 18 last week, and her Sonja voice will certainly be missed. 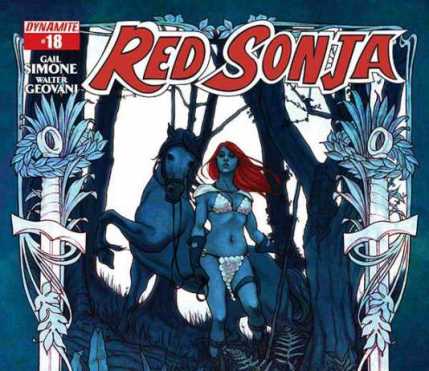 Vague spoilers for the series ahead.

Eighteen issues is a lot of space to tell a lot of stories, and Simone used it to the fullest. She never shied away from stories with high stakes or big moral issues, and really fleshed out Sonja into a character with conflicts, likes and dislikes, and a delightfully brash personality. She grew as a person over the course of the story, coming to terms with and moving past both her own internal conflicts and the disputes she’d had with others in the past. One of the biggest themes throughout the different arcs was Sonja’s compassion toward the weak, and, her compulsion to help the victims of bullies escape their oppression. Sometimes this meant punching a guy in a bar who was being a dick; sometimes it meant going on a nigh-impossible quest because the lives of a thousand slaves were on the line if she failed. However, Sonja herself doesn’t realize that this compassion is an important part of her, and in the penultimate arc she uses magic to purge herself of it, a decision that comes with a heavy price on reversal.

The final touching arc finds her, against her better judgment, protecting a monastic library and the nuns who live there from destruction by an evil empress. Sonja doesn’t understand their celibacy or commitment to their faith, and she can’t understand why they value the books in their tower over their own lives—partly because she can’t read or write herself, but also because she’s nothing if not pragmatic about life and death. In fact, when they first ask her to help, she laughs and leaves. But something about their plight resonates with her, and she ends up saving both the women and the library. Even though there’s a disconnect in their beliefs, Sonja respects the goodness and passion of the nuns, and is able to connect with and befriend them despite their differences. It’s a sympathetic and interesting portrayal of religion in that it’s not a conversion story—Sonja doesn’t leave the tower a sworn sister or anything—but in that it shows how lived examples of faith in individuals can be inspiring to even those outside that particular religion.

She also uses the character to poke fun at Sonja’s original backstory, which was that she’d sleep with anyone who could defeat her in battle. The Untouched in Osric’s name is doubly meaningful, if you get me, and Sonja declares his vow “the stupidest thing she’d ever heard”. (from Osric’s Twitter)

On a less serious note, the series is also just really fun. There was a running gag for several issues that Sonja just could not get laid, no matter how hard she tried, because she reeked to high heaven and didn’t realize she needed a bath. Simone also has a habit of writing people she likes into her stories as guest stars, and the second big arc of her run was a testament to this. My personal favorite of these cameos was Supernatural actor Osric Chau, and was actually almost big enough to be a supporting role. In an arc where Sonja had to collect six people who were famous for their skills to entertain an emperor, Osric appeared as Osric the Untouched, a peerless swordsman. Osric and Simone had bonded on Twitter over their mutual love of the DC character Ryan Choi/the Atom, and this is a fun tribute, since the people who know him will get it, but it’s not alienating to the people who don’t.

While the Swords of Sorrow event is still wrapping up, and Sonja is still co-starring in another series with Conan the Barbarian, this seems like the end of an era in a way. It looks like it’ll be a while till a new team picks her up, and I’m hoping that whoever it is, Dynamite picks someone who will do the She-Devil justice, both in writing and in art. In the meantime, Simone’s doing a bang-up job on the re-launched DC title Secret Six, so if you’re feeling a Gail-shaped void in your life, maybe pick that one up instead.

Also, the last issue ends with her getting a bangin’ new haircut that I am super hyped about and may have to get myself.