Now that Fear the Walking Dead’s first season has wrapped up, The Walking Dead is back on for another sixteen episodes, and despite my growing dislike for Rick, I found “First Time Again” immensely enjoyable. Now that Morgan’s in Alexandria, he and Rick are getting to know one another again—Rick is a vastly different person than Morgan knew from Season 1, while Morgan is still reserved, kind, and disapproving of violence.

Their conflict with each other is, quite unsurprisingly, nothing like what the trailer wanted us to think. This is because The Walking Dead, at six seasons in, still hasn’t figured out that trailers are not actually supposed to blatantly lie to audiences. Nevertheless, it was still good to see that someone doesn’t think everything Rick did was completely justifiable. Unlike Rick, Morgan chooses to see the best in people, and he has faith that deep down Rick can still be a good person.

While I most certainly still have numerous grievances about Rick’s character, all in all this episode was a lot of fun, and it did remind me why I loved this show so much.

“First Time Again” makes continuous use of flash backs, shown in black and white, to get us up to speed on what’s happening. After Pete’s and Reg’s deaths, Rick refuses to allow Pete’s body to be buried inside Alexandria’s walls, because Pete is a killer. You know, just like everyone else in their group, including Rick. Morgan points this out to Rick, but the two of them still take Pete out into the woods, where Rick just wants to leave his body. Unfortunately, Pete’s son Ron follows them out, because he wants to know where his dad’s going to be buried. It’s not until after realizing that Ron is there that Rick remembers that Pete had people in his life who might actually miss him and that Pete’s body should be buried and treated with respect. As such, he helps Morgan dig a grave for Pete out in the woods, instead of just leaving his body exposed.

I’m honestly surprised that this didn’t immediately occur to Rick. Deanna, Alexandria’s leader, also wanted Pete’s body gone and didn’t care how it was treated, but that’s because Pete murdered her husband and she’s still angry and grieving. Rick, on the other hand, has no excuse and is just out of touch with his own humanity. When it comes to abusers like Pete, despite their toxicity, they still often have people who do love them, and you don’t get to justify mistreating their bodies, especially when that comes at the expense of their loved ones. And taking him out in the woods in the first place just goes to show how much Rick doesn’t care about that. Now, for instance, if Ron wants to visit his father’s grave, he’s going to have to brave needless danger to do so, instead of just going to the cemetery in Alexandria where it’s safe. An abuser’s actions don’t invalidate their family’s feelings. 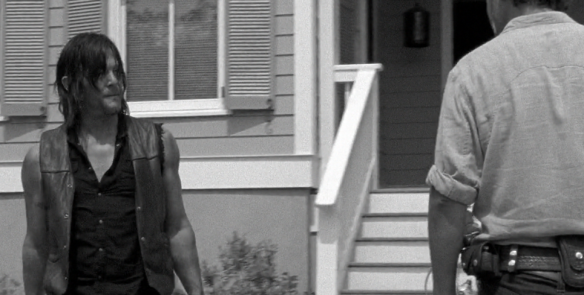 This is not the only way Rick’s more unsavory colors show this episode. At one point, he tells Daryl that they shouldn’t be out looking for more survivors to bring inside Alexandria. His reasoning for this is that people outside the walls need to fight for survival just like they did. And to that I say, “what the fuck is wrong with Rick?” Consistently, throughout the show, Rick always forces himself and his group on other people, but he cannot empathize with anyone else struggling to get by. In Season 2, he all but demanded Hershel give him and the others a place to stay on the farm, only to turn around and torture Randall for being an outsider. And now that Alexandria has accepted the Atlanta survivors, he doesn’t think that same compassion should be shown to anyone else.

Thankfully, in both these instances, Rick is called out on his actions. Daryl tells Rick that he disagrees with him and that finding more living people is the best option for survival, and through Ron we can see that when you have the option to do otherwise, you cannot mistreat someone’s body because they were an asshole. Both these things made this episode much more enjoyable.

However, while out burying Pete, Rick and Morgan discover a quarry filled with walkers trapped by trucks. The walkers create enough noise to attract other walkers in the area, who then fall into the quarry and become trapped as well. This explains why Alexandria has survived for so long without too many walker-related troubles. Unfortunately, one of the trucks is about to give way and tumble down the hillside, releasing all the walkers. Rick comes up with a surprisingly decent plan to deal with this issue—they’re going to release the walkers themselves and draw them at least twenty miles away with flare guns.

The one truck conveniently gives way right after the quarry’s discovery, forcing our characters to enact their plan a day early, but they manage to pull it off and it works. One person, a minor character named Carter, dies in the process, but not due to any falling on the plan. A rogue walker who wasn’t from the quarry bites him in the face. Carter’s character acted as a pretty superfluous antagonist this episode. He doesn’t like Rick and feels pretty strongly about Rick being dangerous. But don’t worry, Rick fans, despite Carter’s very well-founded grievances that should totally be addressed, he comes around and recognizes Rick as a decent authority figure before dying.

After being bit, Rick kills Carter in front of Michonne and Morgan. Both Michonne and Morgan are rightfully disturbed by this—they recognize that Carter was going to die and that his screams were attracting the walkers, but they are put off by Rick’s ability to kill people without hesitation. Our episode ends with a fog horn being blown from Alexandria. This sound catches the attention of the walker herd, laying Rick’s plan to waste.

I suspect the Wolves are behind this. They’ve been massacring communities and have been known to control the walkers with sound. They potentially killed Noah’s group, and I suspect that we’ve been seeing their work since all the way back in Season 4. The Wolves have a habit of carving W’s into walkers’ heads and tying people to trees for walkers to find. At one point, the Governor came across a group of walkers who had words like “liar” carved on their foreheads as well. When I saw the quarry, I immediately thought the Wolves were behind it as well, since they like to keep their walkers in trucks. I guess we’ll find out more in the following weeks.

“First Time Again” was over an hour long. A lot happens this episode—we’re introduced to new characters, we find out why Glenn spared Nicholas, the moral conflict between Rick and Morgan, the Alexandria residents’ recovery from losing two of their own in cold blood at the end of last season, so on and so forth. Other than my aforementioned issues with Rick, “First Time Again” is a very enjoyable episode, and even when it comes to Rick, the show is finally starting to call him out on his actions and make him question his own humanity and morality. So who knows, maybe by the end of the season Rick can grow into a good person again. “First Time Again” did reinvigorate my love for the series, and I can only hope The Walking Dead can keep up with its newfound momentum.