When I was a kid, one of my favorite books was called Time Cat, by Lloyd Alexander, who’s much better known for series like The Prydain Chronicles and The Vesper Holly Adventures. At the time, I didn’t have a cat, and to make up for it, I read every book about cats that I could get my hands on. (I also did the same with books about dragons, but unfortunately, that never resulted in a pet dragon for me.) Alexander’s Time Cat, which told the story of a magical time-traveling cat and his human, set the standard for my future pet. After reading and re-reading this book, I dreamed of one day having a genius cat who could talk to me and take me on adventures.

With this kind of example, it’s a wonder I was never disappointed by the actual cat I got in high school, who can best be described as a lazy, dumb glutton (I say this with great fondness). There’s absolutely nothing about my cat that’s reminiscent of the cat of Time Cat, except perhaps for his habit of disappearing from a room for hours at a time (to later be found curled up on my favorite chair, of course). Recently, as fall saunters into my city, my cat’s been hiding more and more often, looking for a warmer place to nap, and though I haven’t picked up Time Cat in years, it reminded me of the way that cat would disappear—to go on adventures, of course, not anything as mundane as napping.

So then I reread the book, obviously.

Time Cat begins by introducing its protagonists, Jason, an average human boy, and Gareth, an average black cat. When Jason’s been having a bad day, he gets sent to his room, and angrily, he starts talking to his cat. Fortunately for him, his cat talks back.

“Lucky Gareth,” Jason sighed, lying back and closing his eyes, “I wish I had nine lives.”

The cat stopped purring. “I wish I did, too,” he said.

Jason started up in surprise. Not because Gareth had spoken. Jason had always been sure he could if he wanted to. It was what Gareth had said.

“I’m afraid not,” said the cat, in a very matter-of-fact way. “But, since you mention it, I’ll tell you a secret. I only have one life. With a difference: I can visit.”

“Yes,” Gareth went on, “I can visit nine different lives. Anywhere, any time, any century.”

“Oh, Gareth!” Jason clapped his hands. “Can all cats do that?”

“Where do you think cats go when you’re looking all over and can’t find them?” Gareth replied. “And have you ever noticed a cat suddenly appear in a room when you were sure the room was empty? Or disappear, and you can’t imagine where he went?”

While my cat only ever disappears to later be found napping in places he shouldn’t be napping in, Gareth, like a kitty Doctor Who, ends up taking Jason to nine different times and places in Earth history. Like the TARDIS, Jason finds that all languages have been translated for him; unlike the TARDIS, Gareth and Jason only go to cat-relevant places. First, of course, there’s ancient Egypt, well-known for its worship of cats; then Rome and Britain, where Jason helps introduce the custom of keeping cats as pets; Italy, where a young Leonardo da Vinci draws Gareth; Japan, where Jason meets a Chinese trader bringing cats to the Emperor, and so on and so forth. In each time and place, Jason and Gareth help the people they meet to realize important lessons about life and about cats. 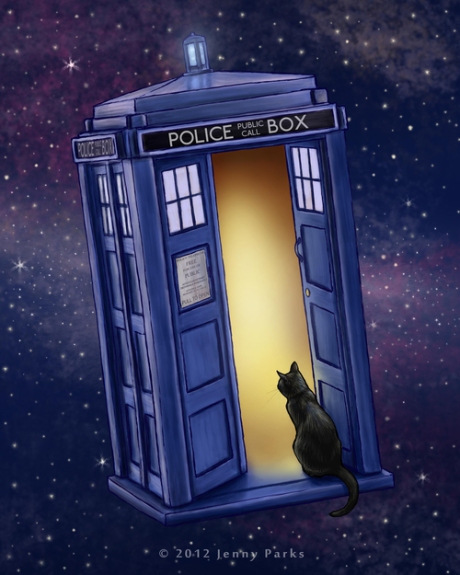 In another life, who knows? (image via the incredible Jenny Parks)

Lloyd Alexander has said that he did a great deal of research to figure out which places Jason and Gareth might want to visit, and that’s certainly reflected in his book (at least, the places I know of). Despite this, they don’t meet a lot of women or important historical female figures—I’ll give Alexander some benefit of the doubt, though, as the book was written in 1963 and perhaps sources weren’t as readily available to him as they are today with the internet. Fortunately, no explicit mention is ever made of Jason’s race—Jason visits nearly every continent, but no one ever seems shocked or confused by his appearance. Whatever Alexander’s intention was with the character, it’s possible to read Jason as a true everyman.

Time Cat is a short, fun book, clearly written for an elementary school reading level. Even after all these years, I’d still recommend it to your kids and cat-obsessed kids. Just tell them not to be too disappointed when any pet cats they meet are not like Gareth. Or are they? I haven’t seen my cat in a while, so… maybe I should go check…