Well, Sleepy Hollow is still continuing to improve itself from last season and I am more than happy with the results. Once again, Pandora is back and accompanied by another scary monster for our witnesses to face off against. All the while, Abbie struggles with telling Jenny about their father, and Ichabod procrastinates studying for his exams in order to become a citizen and instead plays some video games. All that gets put on hold, however, when they learn about Pandora’s latest monster and team up with Jenny and Joe to kill it.

“The Sisters Mills” opens up with two little girls being tucked into bed. After their father turns the lights out and closes their bedroom door, a monster shows up out of nowhere and attacks the younger sister. Joe is one of the paramedics called in to get her to the hospital, and after hearing the other sister talk about monsters, he wastes no time in informing Abbie and Ichabod. Together with Jenny, our witnesses figure out what’s going on. This week’s monster is one of the more sinister creatures from all of our childhoods. A monster that used to stalk us throughout our youth, break into our homes, and leave us presents, kind of like Santa Claus and just as terrifying. Only this time, the hideous creature from our nightmares is none other than the Tooth Fairy, and she doesn’t so much as leave presents as she steals souls. 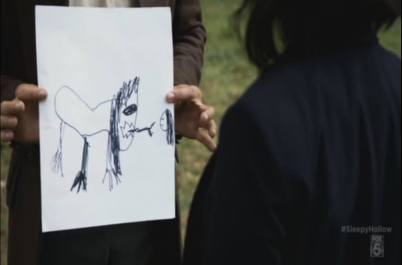 Pictured: an accurate representation of how I used to view the Tooth Fairy.

Kind of like Season 1’s Sandman episode, “The Sister Mills” horrified me, if only because it also featured yet another (supposed) mythological creature from my childhood who scared me (and still does). I feel like Sleepy Hollow is on a mission to validate all my childhood fears. Maybe next season they can kill a demonic version of Santa Claus, or the Easter Bunny.

Other than the nightmares I may or may not be dealing with for the rest of this week, I rather enjoyed this episode. It had some good wacky humor—Abbie takes Ichabod to the dentist for the first time, which he expects to be a torturous ordeal—and we also learn more about the sisters Mills and their relationship to their dad. Abbie finally gets around to talking to Jenny about their father. It turns out, though, that Jenny found him over five years ago and never told Abbie. Jenny also doesn’t care to meet him—he ran out on them when she was three, and she spent her childhood listening to Abbie telling her that he ruined their lives. Jenny also doesn’t believe people like him can change and she’s pretty much perfectly happy that he’s no longer in their lives.

I kind of have mixed feelings on this. On the one hand, I believe everyone deserves a second chance, but on the other hand, I also agree with Jenny. Their dad seems to want nothing to do with them, has made no attempts to reach out, and is more than likely perfectly content with his new family. All in all, I doubt he cares about his daughters, and they went through hell in their childhood, probably in part because he wasn’t around. I’m sure we’ll see more from him in the future, otherwise there was no point to adding his character in, but right now Abbie and Jenny rely on each other and take strength from their sisterly bond—Jenny even uses her relationship and love for Abbie to help comfort Tessa, one of the little girls who was attacked, in order to let her know that her sister loves her and will be fine. The Mills sisters don’t need their dad, especially because he’s probably just a giant asshole.

Unfortunately, Jenny and Abbie’s discussion about this gets cut short when the Tooth Fairy shows back up again, and like the life-ruining monstrosity that she is, she puts Abbie in the hospital. As Abbie spends the rest of the episode out of commission, it’s up to Jenny and Ichabod to kill the Tooth Fairy instead. This task is all the more difficult since the Tooth Fairy is invisible to adults, because this monster wasn’t scary enough already without that ability I guess. Thankfully, they succeed in their endeavor and we can all rejoice at the Tooth Fairy being no more. I can rest easy tonight.

Seriously, can demon Santa Claus die next? I set a plate of cookies out for him once and he didn’t eat any of them. I have hated him ever since.

As I said, I liked this episode a lot, but I still think some of my love for this season is due in part to my distaste for last season. We still don’t know all that much about Pandora other than that she’s evil and growing a tree. She shows up this episode to talk to Abbie at the hospital, and while she gives us an exposition bomb about her past—she was abused and sold by her father, whom she later had killed in revenge—we don’t learn too much. I’m also unsure whether or not she actually wants to kill our witnesses. Last episode, that’s what she set out to do, yet this episode, she doesn’t take the opportunity to murder Abbie when she very easily could have. I don’t even think she’s that poorly a written character at this point in time, but I don’t know anything about her. What are her motives? What’s the tree for? So on and so forth.

On another note, it was nice to see Joe continuing to work with Team Witness and provide some valuable insight into everything that’s happening—our characters wouldn’t even have known about the Tooth Fairy if it weren’t for him. However, he still got a bit sidelined this episode. He hangs out with Ichabod while staking out a child’s house, but after Abbie is injured, he just disappeared from the episode for no reason. An explanation would have been nice. Did he have to work? Did a random bystander need an ambulance? But other than all that, I’m finally getting on the Abbie/Ichabod shipping train, and I certainly appreciated all of their interactions together this episode.

However, all of this aside, what I really can’t wait for right now is next week. By now, I’m sure just about all of you have heard that Sleepy Hollow and Bones are having crossover episodes. Abbie and Ichabod will first appear on Bones, and then Brennan and Booth will show up on Sleepy Hollow. This crossover is completely shocking to me, because at face value, these shows don’t seem compatible with each other at all, and it blows my mind that they take place in the same world. I also find myself questioning if other shows on Fox also exist in this universe.

Nevertheless, I am optimistically excited to see how all of this plays out next week, and we’ll check back in with you guys then to let you know our thoughts.