Generally, I am pro-a given level of sexual adventurousness in teen-focused stories. The fact of the matter is, whether or not the abstinence-only politician of the week wants them to, teens are having sex. Telling them not to have sex? Will result in them having sex. Keeping them in the dark about how sex works and what risks are involved? Will lead to them having sex with unpleasant or dangerous consequences. Destigmatizing and normalizing the fact that teens are having sex by mentioning it in teen fiction once in a while is one of the best ways I can think of to, if not actually educate people, at least begin a conversation about the topic that can lead to a teachable moment. Don’t get me wrong; I’m not advocating for hard-R, explicit sexual content in the next hot YA novel—just a general understanding that sex exists, that teenagers often think about it, and that that’s totally natural (and, of course, that not wanting to have it is natural too).

The number of things I love about Teen Wolf is a rapidly dwindling one, but one of the things I’ve always appreciated about it is the utter mundanity of its sexual content. We’ve written about this before, but it bears repeating in this case since I’m looking at it from a different angle. Pisces was talking about how cool it is that while there are many supernatural and evil things in Teen Wolf, sex is not one of them. It’s just a thing they sometimes engage in. For my own argument’s sake, the teen sex of Teen Wolf is awesome because it covers so many bases for “why people have sex”. Sometimes people do it because they’re in love. Sometimes it’s because they hate each other. Sometimes they don’t feel one way or another about the other person except they find them really hot.

There are hookups of convenience and hookups with ulterior intent. And more importantly, there are diverse hookups: girls may sleep with boys, but boys also sleep with boys and girls sleep with girls. (Sadly, Teen Wolf hasn’t gone the extra mile to introduce a nonbinary character yet.) Furthermore, none of the sexing is related at all to the morality of the characters. Unlike other teen-centered stories where only the villains are having sex and the heroes are chaste and therefore better and more pure, Teen Wolf completely divorces the idea that having sex or not having it makes you a better or worse person.

Marie Lu takes a different tack in her Young Elites series (or, at least in the first book. I haven’t read The Rose Society yet, so no spoilers please!), which follows a group of teenagers fomenting rebellion in a renaissance Italy-esque fantasy setting. While the main character Adelina isn’t sexually active herself — at least not yet — the headquarters of the teens’ secret society is in a house of high-level consorts (courtesans of all genders) and one of her allies, Raffaele, is a male consort who services male clientele. In choosing this setting, Lu is working with the assumption that her target readership of teenagers is aware of what exactly courtesans do, and by making a main character one, she normalizes and humanizes the idea of sex work at the same time. This, however implicitly, leaves the reader with the knowledge that sex exists, that sometimes people pay for it, and that the people who provide said sex are just that—people. And because none of this is remotely the focus of the story, we’re left with a general air of sex positivity without having anything sexual happen ‘on screen’, as it were.

Coming back to the case of Peeta and Katniss, I think that their situation is a little more complicated. While Roxane Gay is a hardcore Team Peeta shipper, I’m more of a “if the only alternative is Gale, it’s cool I guess” person. To me, much of Peeta and Katniss’s relationship is, at least in the beginning, a ploy for sympathy to the cameras. And while kissing someone under duress while being filmed is one thing, doing anything that required nudity, or more sexual levels of touching each other, would put me pretty firmly in the “ew teens are literally prostituting themselves to survive” camp. 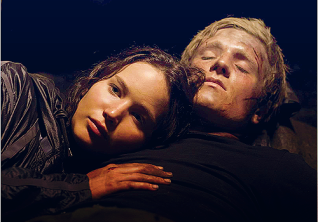 However, if Katniss was really into Peeta (and presumably not asexual) in the instances where she does forget herself or where they are genuinely on their own, it wouldn’t be weird for her to at least think about getting a little past first base, whatever that means in the post-apocalypse, with the other half of Team Peeniss. We do spend the entire series in her head, after all. Even if she’s not actually acting on it, she could have occasionally thought about it. And while the series is very busy without this and, in my opinion, doesn’t really suffer from its lack, there is a specific downside that the other series I’ve mentioned don’t have. Since there’s no real mention of consensual sexuality or sexual activity in the series, that means the only reference to sex at all is the strong implication that the Capitol forced Finnick to prostitute himself out following his victory. This means that the only suggestion of sexual activity in the series implies rape, and there is no ‘good’ example of sexuality to juxtapose it against.

There are so many weird stigmas and beliefs wrapped up in sexual activity, and so much misinformation floating around out there on top of it. Even in this, the golden age of the internets, people are still perpetuating all this bullshit. Popular YA fiction, whether that means books or movies or television, has a golden opportunity in its hands to undo those at the same time as it tells compelling stories, but they have to do it in the right way. Sometimes the right way is to not include it! One of the things that made Katniss such a fascinating protagonist was that she was totally uninterested in the idea of romance for its own sake, and had concerns that were far and away more pressing than getting busy with anyone. But when sex is included, it’s important that it’s portrayed in a way that breaks with the stereotypes and tired tropes that usually appear in the teen genre.