I have no idea why this book of all books was in a middle school library, but there you have it.

Did you guys know that The Dragonriders of Pern has been optioned for a movie series? I knew, and everyone in my house knew, because I shouted about it very loudly for the rest of the day. (Sorry.) I remember borrowing the first book from my school library when I was in the sixth grade solely because it had a dragon on its cover. Although I stopped reading the series after I got into college (which means I haven’t read a lot of the later stuff, particularly by Todd), the series still has a fond place in my heart. Haven’t heard of it? Let me give you a rundown before the movie(s) come out.

Slight spoilers after the jump.

The Dragonriders of Pern is a long series by Hugo and Nebula award-winning author Anne McCaffrey which started way back in the 1960s. After the main story was done, McCaffrey’s son, Todd McCaffrey, ended up writing more Pern stories with her, and after McCaffrey’s death in 2011 (rest in peace), he now continues to write Pern novels on his own. Fittingly enough, the series is about dragonriders on a world called Pern. Though it may seem like fantasy at the start, it’s actually a fascinating combination of fantasy and sci-fi. Far in the future, Pern is colonized by settlers from Earth. Pern is a pretty livable world, but it’s also got a little satellite that the settlers begin to call the Red Star. This is not a friendly satellite like our moon. Whenever the Red Star passes close enough to Pern, it sends out silvery spores called Thread that try to consume everything in their path. They can be burned by fire, drowned in water, and turned away by rock or metal, but otherwise, Thread eats through all organic matter—including humans. So the early Earth settlers to Pern knew they had to do something about Thread in order to keep living on Pern. And they did something amazing—they looked around at the native flora and fauna of Pern and decided to genetic engineer some fucking dragons.

Best. Solution. Ever. (via Wikipedia)

Future Earth has come a long way from the Earth we know, so some of the Earth settlers have slight telepathic abilities. The scientists engineering the dragons figured that the more telepathic humans would be able to bond with the dragonets and talk or share emotions with them, and the act of Impressing a dragon began. Now, the Pern series is written out of order, so the reading order is really complicated, but when the first (written) book begins, this tradition is set in stone. Certain humans can Impress dragons and become dragonriders, who fight Thread on their fire-breathing partners. Society has also reverted to a medieval-esque civilization—the early settlers lost contact with Earth, and generations later, their descendants don’t know anything about how the dragons came to be or the settlers’ original plan to defeat the Red Star. Until, that is, the current Pern leaders start discovering buried technology that they don’t understand…

While the world of Pern remains fascinating to this day, many of the social issues in the series don’t translate well to modern-day feminism. The dragons themselves bring up questionable issues of sexuality and class. Dragonriders live in communities called Weyrs, and the dragon you Impress indicates what kind of position you can have in the Weyr. The rarest dragon is the gold queen dragon, who always has a female human partner. Bronze, brown, and blue dragons are male and have male partners.The most common dragons, greens, are female, but they (generally) also have male partners. When the weyr’s queen dragon rises to mate, bronzes—and only bronzes—are allowed to try and mate with her. The queen and bronzes race, and whichever bronze is remaining at the end gets to mate with the queen. This mating drives the main politics of the Weyr, which is led by the Weyrleader and Weyrwoman. As you might have guessed, the Weyrwoman is the queen’s partner, and the Weyrleader is the successful bronze’s partner. Not only does this mean that heteronormativity is baked into Weyr leadership, there’s also an element of nonconsensual sexual activity to it—when dragons are mating, their humans are affected by their hormones and often also have sex with someone (not necessarily the other human) at the same time.

Since green dragons are female and most often have male partners, when the green mates with a blue, brown, or bronze dragon, it’s not unreasonable to think that their (male) partners are also having sex. McCaffrey, indeed, confirmed that greens and blues often Impress gay and bisexual boys. Yet this doesn’t mean that Pern is great for representation. Dragonriders who aren’t bronze, brown, or queen riders are rarely mentioned in the books, and when green riders are mentioned, it’s often in derogatory terms. In the main books (Lessa’s trilogy and the Harper Hall trilogy), we meet green and blue riders, but we never see their relationships, and from the above interview, it’s clear that McCaffrey doesn’t understand that sexual orientation doesn’t have anything to do with how “effeminate” or “masculine” a person seems. Thanks to Weyr hierarchy, this also means that the queer partners of greens and blues can never rise to be Weyrleaders or Weyrwomen, both because these dragons can’t mate with the queen and because partners of queens and bronzes are, supposedly, all heterosexual. This questionable classism extends outside the Weyr as well—servants in all communities are called “drudges” and aren’t treated with respect or empathy, and to make things even more fun, ableism also plays a role—many servants are termed “half-wits” because of undisclosed and unidentified mental disabilities. 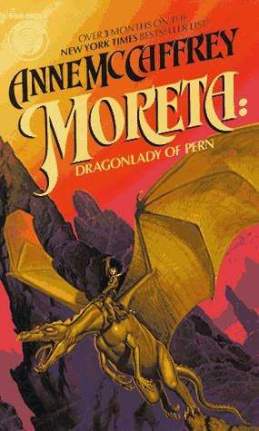 When you read the Pern series in 2015, many of these things are pretty unpalatable. However, within the context of the times when it was written (1960s and onwards), it might be a little more understandable, even if it’s not excusable. What makes Pern a great series even today is its creative worldbuilding (more series should combine sci-fi and fantasy! also, dragons!) and, most of all, its female characters. Pern largely focuses on its Weyrwomen—the queen riders who lead their Weyrs into legend. We start with Lessa, who survives a devastating attack on her family to Impress the last queen dragon on Pern; later, she’s the first one to discover that dragons are capable of traveling between times, and goes back to the past to save the planet. Moreta and Nerilka save Pern from a planet-wide plague, Mirrim becomes the first female rider to Impress a green dragon in generations, and female relationships and female friendships are a comforting constant in most, if not all, of the novels.

My favorite of these great female characters is, of course, Menolly. Though it’s Lessa who rises to the stuff of legend, Menolly spoke to me on a more personal level, which probably comes as no surprise to anyone who knows me. Menolly isn’t a dragonrider—she wants to become a Harper. Harpers aren’t just entertainers, as their name implies—education on Pern is done through songs, and Harpers write songs about historical and current events so that future generations can learn. They’re educators and they’re journalists and they’re creators, and Menolly has the potential to be the best of them all. However, her conservative family doesn’t think that girls should be Harpers, and they keep her hidden away and refuse to let her write music or even practice instruments. When Menolly is brought out of the circumstances of her birth by sheer bad luck, she stumbles into a cave and is one of the first to discover the existence of fire lizards, the genetic precursors to dragons. These fire lizards lead to her making the acquaintance of the the Masterharper of Pern, who’s delighted to meet her: he tells her that her songs are some of the best he’s ever heard and that she herself has potential, and would make a valued Harper. As a quiet anxious kid also trying to write stories, I wanted to grow up to be Menolly—she was living the life I wanted to lead, and, more importantly, she had nine fire lizards.

Now that technology has advanced enough for us to be able to animate realistic dragons, I’m glad that Pern has become a viable option for a movie. It doesn’t mean that I’m not worried about it—Hollywood doesn’t like strong female leads and Pern is filled with them, and I can’t wait for the movie to be filled with only white people, even though some of the original Earth settlers were definitively people of color and most characters are not overtly defined as white, leaving ample opportunity for true colorblind casting. However, all that being said, The Dragonriders of Pern is still a pretty great series. I would highly recommend that you give it a try before the movie comes out, if the movie actually ever does make it to the silver screen.

8 thoughts on “Throwback Thursdays: The Dragonriders of Pern”