It’s been so long since the first Snow White and the Huntsman movie that I was more than surprised to see that they were actually going forward with a second movie in the same universe. I didn’t really love the first movie—I liked it more for what it was trying to do than for what it actually did—but based on this trailer, the franchise might draw me back in for part two.

Wikipedia calls The Huntsman: Winter’s War a “sequel/prequel/spin-off” but then goes on to say that it’s set before Queen Ravenna fell to Snow White’s blade, so… it’s clearly a prequel? Anything else wouldn’t make sense, since Ravenna’s, you know, alive. The story appears to follow two of the Evil Queen’s Huntsmen—the one we know from the first movie, Chris Hemsworth’s character, and a new one (billed as the Warrior in the trailer) played by Jessica Chastain, who go rogue and go after the Queen and her Ice Queen sister. Chastain looks incredibly badass and I’m excited to see her in an action role, since that’s different from her recent movies. Given that Hemsworth’s character is still working for Ravenna at the beginning of the Snow White movie, though, I hope that that doesn’t mean Chastain’s character is going to die a tragic fridgey death before the end of Winter’s War. 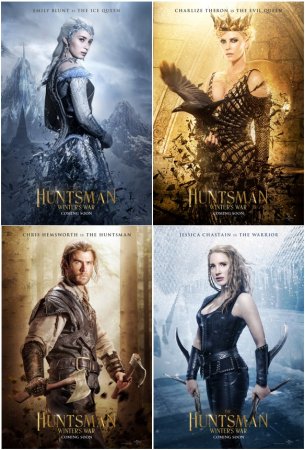 I’m intrigued by the inclusion of the Ice Queen into the story, especially in her original conception as a villain. It seems nigh on blasphemy in a post-Frozen world to make the blond girl with ice powers evil, but I’m glad they did. I’m also glad to see that she and Ravenna appear to be working together; too often they’d be cast as rivals whose petty bickering is their own undoing. It’ll be interesting to see how our heroes go up against a united evil-queen front. Furthermore, the presence of the two queens and the Warrior means that 75% of the main cast of the movie is female, which is also a new and different thing for a fantasy/adventure flick. There’s even a female dwarf among the group of dwarves we see in the trailer!

However, one of the biggest problems I had with the first movie was the issue of its worldbuilding being confusing and over-busy, so I hope that this movie doesn’t fall into the same trap, or even that it helps dig its predecessor out of its worldbuilding hole. I felt like a lot of the magical creatures were shoehorned in, it was unclear whether Snow White had magical abilities or not, and for some reason Catholicism existed? We’re still clearly gonna have magical creatures in this one—the trailer is full of sprites and trolls and whatnot—but it’d at least help if their existence/role in the world was explained a little more clearly.

In the end, I could probably get away with being totally superficial and just watching this movie because the visuals look spectacular and I’m hard-pressed to pick which cast member I’m most attracted to. Whatever reason gets me in a seat, you can bet that when this movie finally hits theaters in April, I’m gonna be there.