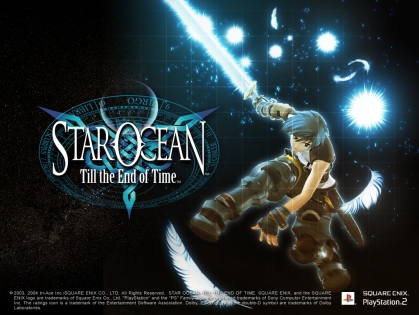 Star Ocean: Till the End of Time is quite possibly one of my favorite games. Released in 2003 for the PS2, I found the game to be extremely well made and fun, even though the story did have some problems. Also, a couple of the voice actors are really bad. Like, exceedingly ear-bleeding bad. That said, overall, this game is certainly better than Star Ocean: The Last Hope. Not only does Till the End of Time really go out of its way to develop its worlds, it doesn’t rely on or subject its characters to pointless and offensive stereotypes. While this game does follow a male protagonist and was clearly marketed to boys, I can’t quite say that there was ever a time when the roles given to the female characters made me groan in disbelief and annoyance.

The story chronicles Fayt Leingod’s adventure through space about 800 years from now. While at a vacation resort with his parents and childhood friend Sophia, they are attacked by the Vendeeni, aliens who oppose the Federation. After escaping from the planet relatively unharmed, Fayt eventually crash-lands on the undeveloped planet Elicoor II with a few new friends he made, Cliff and Mirage. After spending nearly half the game there, they make it off Elicoor and discover that horrible monsters called executioners are flying around the galaxy killing people. Our heroes then learn that their entire universe is nothing more than a computer simulation. They’re just programs who gained sentience, and the executioners are more programs sent by the creator to delete them. Fayt’s parents knew that this was going to happen years ago, and so they genetically experimented on Fayt, Sophia, and a girl named Maria when they were babies to give them awesome magical powers. When the three of them work together, they can escape from their world into the real world. Our band of heroes has to travel into the real world in order to stop the creator from deleting the entire Milky Way.

There’s another point in the game while still on Elicoor that Fayt meets a girl who looks just like Sophia, because they have the same character design. Fayt even freaks out because they look so similar. This is the first real hint we have that the Milky Way isn’t real. However, I’m not sure that I actually believe the characters live inside a computer. In all probability, Sophia and her lookalike is just a random happenstance. Though our characters thankfully manage to defeat the creator, they don’t stop him from hitting the delete button on their entire world, and then, nothing happens.

The Milky Way still exists. The impression I got during my replay was that the Milky Way and the real world were both real places, just alternate realities. The real world discovered the Milky Way, somehow assumed it was a computer program, and then started screwing around with it. People in the real world even mention that what happens in the Milky Way cannot be reset—if a Milky Wayian somehow dies, they can’t bring that program back, but most tellingly, there’s no other way Fayt and the others would be able to jump out of a computer screen into the real world if they were nothing more than information, no matter what genetic modifications they underwent.

As interesting as I find this from a storytelling perspective, the pacing for the game is a little slow. The overall design definitely has a problem conveying urgency. There’s just a little bit too much silence between dialogues, the characters don’t often run when they should, they don’t tense up, and their facial expressions almost always look happy. This made the more urgent scenes—like when planets were being bombarded from space—seem less urgent. It also made the characters’ conversations with each other stilted. And probably the most annoying thing about the game is that you cannot get every playable character in your party. There are four optional characters, and you can only have two of them. Depending on which ones you pick, nothing in the narrative really changes all that much. That and some of the voice acting are my biggest complaints.

However, I was immensely happy with the game’s take on its female characters. While they are all subjected to shitty beauty standards, they are not sexualized or subjected to godawful tropes. We see female characters fill a number of roles, from warriors, to leaders, to spell casters. Some of them are physically strong, and some like Sophia and her lookalike are physically weak. This kind of variety made the game all the more enjoyable. I imagine that gender roles is something the game makers really paid attention to in the game’s design, because Elicoor II, the planet the characters spend most of the game on, has a clear gendered divide. While on the planet, Fayt and the others get caught up in the political intrigue and war between two of Elicoor’s countries, Airyglyph and Aquaria.

Airyglyph acts as the antagonist country. It is ruled by a king, its armies are led by men, and only men fight for them. The country is a patriarchy through and through. Aquaria, on the other hand, initially comes off as more of a matriarchy. However, we learn that that is not entirely the case. Despite being ruled by a queen and prioritizing women over men as leaders—which is not necessarily a good thing—Aquaria is much more gender neutral. Men and women have more or less the same opportunities, and the country is practically a utopia compared to Airyglyph. We do learn that not everyone in Aquaria is a good person, while we also learn that Airyglyph is not entirely evil. The two counties are so developed and nuanced that another whole game could have been made about them and their conflict alone.

I really enjoyed this game a whole lot. While I’m disappointed that character designs adhere to Western beauty standards and that there’s little to no LGBTQ+ representation—it’s possible the character Albel Nox is trans, though I’ll talk about that in a later post—female representation is still really good, the story is interesting, and the world building is just fantastic. If you’ve never played Star Ocean: Till the End of Time, I would check this one out.

4 thoughts on “Throwback Thursdays: Star Ocean: Till the End of Time”