Light spoilers for Undertale. Continue at your own risk.

I don’t think I’m alone in saying that Undertale was the unexpected hit of the year as far as video games are concerned. The Earthbound-esque indie game born from the mind of Toby “Radiation” Fox (Homestucks should recognize the name, as his hands are all over the various soundtracks for the webcomic) follows the story of a young child, Frisk, who has fallen unto the Underworld, a land beneath the human world that monsters call home. It’s up to Frisk to find a way back to the human world. However, to do so, they’re told they must break through a barrier separating the two worlds from each other, and to do that they need to combine the power of a human soul and a monster soul. One of the more interesting things about Undertale is how it attempts to break down the clichés of traditional RPGs. In doing this, the game is more of a morality tale on what you’re willing to do to reach your goal—are you going to kill the monsters to get stronger? Or will you find a more peaceful way to traverse the Underground—as well as an examination on a player’s own drive to be cruel for their own entertainment. Though, as with most pieces of media, the aspect that keeps people playing the game and in the fandom is the characters.

Undertale offers its players a complete cast of interesting and quirky characters that also manage to scratch some diversity itches. The robot Mettaton is coded heavily as trans, delighting in his life now that he has a new body that he feels comfortable in and that expresses the real him. Frisk, the player character, is purposefully addressed using the pronouns “them” and “they”, giving players a young non-binary lead (and perhaps even a non-verbal lead, if fan theories prove to be true). The topic of depression is viewed through the eyes of the ghost Napstablook and the royal scientist Alphys. And ladies are given just as important roles as the men are; both are cast as knights, protectors, caretakers, and powerful, intelligent creatures; both have secondary and supporting roles. Each character is memorable and likable, yet, as usual, fandom love is not doled out as equally.

We’ve discussed the topic of femslash and fandom before here on this blog, but then the topic seemed to be broached from more of a headcanon perspective. People seemed to be shipping Sherlock and Watson more than, say, Irene and Molly Hooper, based on the simple fact that the male characters were given more characterization, yet neither pairing was officially canon. (Queerbaiting doesn’t count.) The reasons for the lack of femslash seemed equatable to a lack in the quantity of female characters, so arguably if more ladies were added to a piece of media, with characterization focused equally between all the characters, then the amount of femslash would rise. However, Undertale, a story with a more even distribution of male and female roles, is making a strong argument that this isn’t the case. 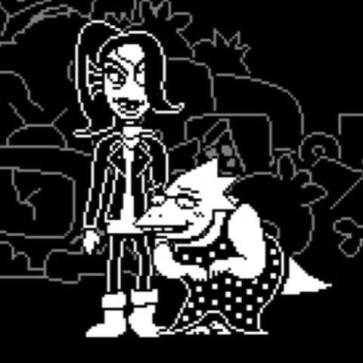 As far as the cast goes, surprisingly we have a canonically lesbian couple: Undyne, the head of the royal guard, and Alphys, the royal scientist. (For the sake of this article, since both people in the relationship are women, I will be calling it a lesbian ship. But Alphys is canonically bi or pan.) The best thing–and most surprising looking at many other lesbian ships–is that they end up happy! Finally, a fandom gets its canon, non-tragic femship, but looking at the trending ships, it seems that fandom would much rather focus on the m/m ships.

Arguably the most popular m/m ship is the one between Mettaton and Papyrus, a hopeful for the royal guard, but this isn’t a situation where I can point at this or any single source and say “this is the problem.” While fandom sets out, in many cases, is to add representation where there is none, I find it somewhat unfortunate that this ship–along with other non-canonical m/m ships–has such an abundance of fan praise for it while the canonical m/m ship of the two royal guards is usually left in the catacombs of fan representation. But I’m getting ahead of myself.

I have very little doubt that this chasm of popularity between the f/f ship and the m/m ships has to do with internalized misogyny. While there still may be some of the physical objectification aspect to shipping these characters, I personally believe that has somewhat less to do with it—through media, people are conditioned to find men attractive, but how well this transfers over to androgynous-looking skeletons is part of a study that hasn’t been done yet. Slight bitterness aside for a moment, I completely understand part of the importance of the Mettaton and Papyrus ship. Just as much as lesbian ships, trans people deserve to have representation in the media they consume where they are loved and respected. So, sure, maybe I can let this one slide: Mettaton, Alphys, Undyne, and Papyrus all have about equal screen time, and the fanworks created for them are probably roughly equal. (And as long as the relationship between Mettaton and Papyrus isn’t presented as sexual, as Toby explicitly said that Papyrus “doesn’t know what things like that are”, then that’s fine.)

However, then we have another ship that’s come up between Nice Cream guy and Burgerpants—yes, that’s his name. These guys show up once, and Nice Cream guy isn’t even really characterized at all. Then another ship between Sans (Papyrus’s brother) and Grillby, a restaurant owner. While Grillby and Sans do know each other, as much as any bar owner and frequent patron would, Nice Cream guy and Burgerpants have no interaction whatsoever. And if fandom really wanted a ship for the minor characters, then the canon relationship between the royal guards is already there. Fandom, as usual, likes to take any male character and stick them together with another for the sake of a ship, and often ignores the female characters that they could be doing the same things with. While “Nicepants” and Grillby/Sans is nowhere as near as prolific as works for the “Papyton” ship–at least according to sites like AO3, where Papyton has 100-ish fics while the others don’t even have categories–because these minor m/m ships exist and minor f/f ships don’t seem to, word of mouth about these ships emphasizes the imbalance in representation.

Seriously; why have I seen no ship fodder of these two?
(via determina-tion @ Tumblr)

What I find especially perplexing here is that while most explanations seem to point towards the misogynistic ideals imprinted on us concerning sexuality (that the sexual relationships between women are somehow less satisfying and less worthy of exploring than those that involve a man), a huge proportion of these fanworks are not sexual at all. So, from this I can only assume the underlying thought here is that male relationships, no matter if sex is the ultimate goal, are just more valued by fandom as a whole. Which, given the innate misogyny of our media culture, really isn’t that surprising at all.

What’s moreso, or at least extremely frustrating, is that fandom isn’t willing to admit that this is a problem. Undertale promotes acceptance and friendship, and the fandom attempts to do the same, but when you start criticizing shipping practices, people get defensive. I’m not here to police shipping—do what you want so long as it’s legal and tagged—but I am here to point out this huge disservice. For once we have a situation where the problem isn’t that the female ships are being ignored: tons of works are, thankfully, being created for Undyne and Alphys. The problem is that when m/m ships are held in higher demand and value, existing femslash fics get buried beneath them, making them feel almost non-existent.

Upon discovering the statistics, I don’t know how this can be. Looking at the fic collection on AO3, works for Alphys and Undyne far outnumber those for Papyrus and Mettaton–and every other ship for that matter–excluding reader insert fic. So, what we have is an entirely internal fandom issue directly related to what gets hyped. A simple image search of “Undertale Ship” on Google and Tumblr, while not completely disheartening, does show on a very basic scale that the m/m ships are more popular/more frequently searched than the f/f ships. Additionally, on related searches, “Mettaton and Papyrus” is the first option to show up, while “Undyne and Alphys” isn’t even an option.

It’s not a crime to ship m/m ships, but it is negligent to turn a blind eye to the fact that the imbalance of these ships is, at its core, misogynistic. The Undertale fandom has a perfect opportunity to even the shipping odds by being just as fervent with their random pairing skills among the female cast as it is with its male case—in a non-sexual setting, even! However, even if there are lots of works out there for the female ships, something is clearly getting lost along the way. What we need is not necessarily more works of femslash in this case–although we can never have too many of them. What we need is more people spreading the word about these already existent works and appreciating what both the game itself and its fans have given the fandom. We need to do a much better job at supporting these craftspeople: it’s a crime that I had no way of guessing how much work was out there for our lovely ladies when sites like Tumblr seem obsessed with anything but.

It might seem obvious that Alphys and Undyne are a popular ship to some, but I’m not the only one in the Undertale tag wondering where all the femslash is. We need to be more proactive in reblogging works for these ships. We need to take a strong stance on linking these stories that might otherwise be drowned beneath other works. Most of all, I think, we need to be more willing to explore f/f ships in the same way m/m ones are explored. Think that Shyren and Muffet deserve to have a ship? Let it be known, canon interactions be damned. Who knows, maybe your idea will spark a femslash renaissance in the Undertale fandom. And maybe this may spark more in other fandoms. Let your determination shine through!

4 thoughts on “A Lack of Femslash Fills You with Determination”