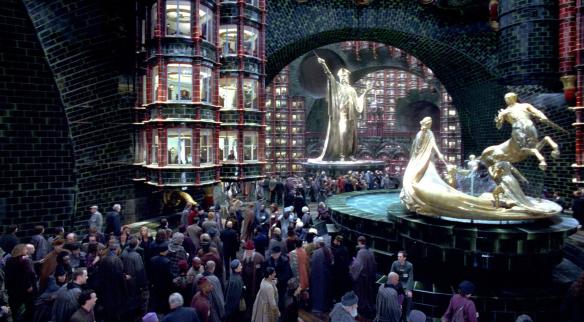 Harry Potter will forever be in all our hearts, but the narrative leaves a lot of important questions unanswered. For an entire series based around an evil wizard who wants to conquer the world and subject Muggles to his oppressive rule, we don’t see a lot from Muggles in the whole story. In fact, the few Muggles we do spend time with are reprehensible bigots. Muggles greatly outnumber wizards, and because this non-magical community is so widespread, it’s hard to believe that they don’t have a greater influence on wizarding society than what the books would have us believe.

We see wizards copy a lot of Muggle inventions—cameras, for instance—and imbue those things with magic, but comparatively speaking, the wizarding world lacks the same kind of innovations that Muggles excel at, for whatever reason. Whenever we see flashbacks to events in the past, or hear of long-past wizards, it doesn’t seem like magical technology has changed all that much. Every once in a while, someone invents a new spell, but the quality of a person’s life, or even how they live their life, doesn’t change. Muggle society and scientific advancements change and grow at such a rapid pace, that by the time books start, science is starting to make magic obsolete. Furthermore, Muggle technology is also going to expose magic to the world.

The books take place in the 90s, when things like the internet were relatively new to the public consciousness. But we still had a lot of technology back then—cellphones, television, decent writing utensils, etc. In comparison, wizards were still using quills and mailing letters delivered by owls. Normally I would say that there’s never going to be a clear answer between which is better—magic or science—since both forms of living offer things the other doesn’t. Muggles have the convenience of the internet, while wizards still have to use a public library to research. At the same time, wizards have a lifespan that’s nearly double ours. However, given the lack of advancement within the wizarding world, in just a few years after the series ends, Muggles have many of the conveniences wizards have. And for some of those things, Muggles have the better deal.

As a Muggle, if I wanted to have a conversation with a friend in real time a state over, all I have to do is call that person from my cellphone, and I can do that just about anywhere. I can also simultaneously chat with another person through texting while I’m at it, and maybe even order some food. What I don’t have to do in order to talk to someone is stick my head in a fireplace, which would severely limit my ability to multitask. Even given that Harry was born in 1980, using owls to deliver letters would have already been obsolete in comparison to contemporary Muggle technology. I also find it hard to believe that at no point in the series do we ever see a Muggleborn student bring a pen or pencil to Hogwarts and forsake using quills altogether. And I find it really hard to believe that by the time Harry’s children are going to school, the Muggleborns won’t be pissed off about their lack of wifi.

Throughout the course of the books, we never see Muggleborn children attempt to combine magic with science. Sure, the wizarding world has magical cameras, but what about magical television sets, video games, microwaves, etc.? Visual media alone has the possibility to completely revolutionize the wizarding world—it’s not just another platform of entertainment, it’s also a means of education, communication, and business. We learn early on in the books that electronics won’t work at Hogwarts—which has some interesting implications for how magic actually functions—but there is nothing in the source material that explains why this is. Furthermore, since we never see someone try to bring regular Muggle electronics to Hogwarts, we have nothing in the books to confirm that the incompatibility between science and magic is true. And once again, we do see wizards with magical cameras, so we know it’s possible to make these things work regardless. Despite numerous Muggleborn and half-blood wizards and witches, not only is the wizarding world falling behind in technological innovations, they are horrifically ignorant about Muggle tech as well.

During Goblet of Fire, Mr. Weasley needs Harry to help him handle Muggle currency. In another book, Ron has trouble figuring out how to use the phone—he thinks he literally has to scream into it. Even worse, for some reason wizards and witches are more or less completely incapable of figuring out how to dress like Muggles in order to blend in, even though their entire society is based on maintaining secrecy from Muggles. This all becomes even more horrible when you realize how flippant the wizarding world is about the Muggle world. When Hagrid meets Harry for the first time, he all but kidnaps him—Harry’s legal guardians didn’t give him permission to go to Hogwarts; they actively forbid it. The new Muggle prime minister in the sixth book has a whole one conversation with the wizarding prime minister about Voldemort and the world being in danger, a conversation that probably left him significantly confused about a good number of things. Most alarmingly, Muggle parents with magical children don’t learn about Hogwarts or the wizarding society until their children do, at the age of eleven. To wizards, learning about Muggles and their way of life is seen more as an eccentric, weird, and sometimes frowned-upon hobby, as opposed to a necessity. Even at Hogwarts, the only class about Muggles is an elective.

While at the very least we know that a wizarding representative greets each Muggleborn child to explain things to them and their parents, they still spend the first eleven years of their lives wondering about all that accidental magic they keep doing. When Lily’s a child, we see her manipulating flowers and showing it to her sister, which means she probably told her parents all about her abilities, and Harry at one point Apparates onto a roof. At another point, he shrinks a sweater and regrows all his hair. We find out that his whole childhood has been filled with strange happenings that he cannot explain, like talking to snakes. Given how wizards handle these situations, how quickly Muggleborns come into their powers, and where Muggle technology is headed, this has some pretty bad implications for the wizarding world and its secrecy.

Because wizards are unaware of how Muggles function in day-to-day life and don’t know how their technology works at all, wizards are setting themselves up to be exposed. In fact, by the time Harry’s dropping his own children off at Platform 9¾, Muggles most likely already know about the wizarding world. As Luce pointed out to me when we were chatting a while back, all it would take is YouTube and a smartphone. Eventually somewhere along the line, either the Muggle parents or their magical children are going to record these odd happenings and then post them to the internet. While most people will probably just think they’re CGI or camera tricks, someone else is going to look at that video and say, “Hey, I can do stuff like that too.” It won’t take long before everything blows up in wizards’ faces. Even if electronics actually don’t work around magic and Muggles are incapable of recording these things, that won’t stop people from going to the internet and Googling “wtf is my kid doing?” and finding other Muggleborns online. In the social media age, we as a society like to share just about everything. Wizards can’t Obliviate the internet.

Throughout the entire series, we see the wizarding world consistently ignore or underestimate the Muggle world, and this is only to the detriment of wizards. Even in the 90s, the internet was around. The wizarding world is doomed to exposure; it’s just a matter of time. Muggles are curious—they like to learn what things are and how they work. Learning about magic and it being real is something that they’re not just going to ignore. Muggles like to perceive challenges and then overcome those challenges. Wizards have flying broomsticks? Cool! We’re making hoverboards. Wizards play Quidditch? That looks awesome! I guess we will invent broomsticks that can fly with science so we can play too (okay, so those brooms don’t fly yet, but maybe someday). They study astrology? Fantastic! We’re looking for alien life on other planets. Also, how does lycanthropy work in space? Can a cure be found there? Muggles will want to study that one.

Muggles will most likely look at the existence of magic and better themselves and improve their science from that. But they’ll also look at things like the Oblivate spell and be pissed. They’ll find a way around it, and they’ll find a way to combat magic. The worst possible outcome for wizards would be to face a war with the Muggle world, because the wizards will probably lose. After all, body armor is not something Aurors even think to use until the Weasley twins invent some. In fact, there’s a really in-depth fan theory that claims wizards and Muggles already went to war in the Middle Ages and the wizards lost. However, there’s just as likely a possibility that Muggles and the wizarding world can live together in harmony and help each other. Instead of being flippant toward Muggles or ignorant of their way of life, wizarding society should pay a lot more attention to them. Because the Muggles sure as hell will be paying attention to the wizards.

2 thoughts on “Magical Mondays: Muggles, Science, and the Wizarding World”