Finishing both Fallout 4 and Xenoblade Chronicles X has left me with a terrible sleep schedule and not a lot of time for much else. However, sometimes a Sole Survivor or BLADE initiate needs to take a break, and what better way to do that than to sit down to a movie? Back in August Saika looked at the trailer for Pixar’s second film of the year, The Good Dinosaur, and spoke of how while the idea of the film seemed somewhat novel, she feared the actual application of it would be somewhat bland. While it’s not uncommon for film trailers to be misleading in more ways than one, I’m somewhat disappointed to say that The Good Dinosaur is just as bland as Saika proposed, in addition to fulfilling many, if not all, of her fears about the film as a whole.

Due to the whole “comet missing the earth” thing, the dinosaurs are allowed to thrive and many, many years later we end up with a family of farmer apatosauruses waiting for their eggs to hatch. To the farmers, Henry and Ida, three beautiful children are born: the rambunctious Buck, Libby, and the runt of the litter (and our protagonist), Arlo. Growing up on the farm is difficult—since even with the ability to speak and heightened intelligence (which I can only assume comes from years of evolution), dinosaurs still aren’t intelligent enough to come up with any form of basic technology. Yet, for little Arlo, things are even harder since he’s scared of everything. He keeps on trying to leave his mark for everyone to see (literally, since the dinosaurs put a footprint on the family silo once they’ve done something of some importance), but keeps messing everything up.

Seeing his son struggle forces Henry to try and approach his child-rearing style from another perspective; instead of forcing Arlo to do the same old thing, he gives him an important job. Something has been eating the food out of the silo, and without that, the apatosauruses won’t survive the winter. Arlo’s job is to catch whatever’s been going in and out snacking, and to kill it.

Soon enough, the creature falls into the simple trap the two set up together, yet despite his best efforts Arlo is too afraid to kill it. With the creature—a little human boy—released back into the wild, a fed-up Heny takes his son to go hunt the thing down, traveling alongside the river. It’s only when Arlo twists his ankle from trying to keep up with Henry that the father realizes he may have been pushing his son too hard. Unfortunately, the two head back just in time for a storm to hit, and Henry is swept away to his death by the gushing river.

Honestly, I feel like this movie was made to say “look at how good our CGI is.”

Now with more work than ever back on the farm, Arlo does his best to help his mother and siblings, but immediately goes out for revenge upon seeing the human boy again. Chasing after him, Arlo soon becomes lost and must learn to survive in the wild with the dog-like human. More importantly, he needs to make it back home before winter, or else his family won’t have enough hands around the farm to prepare properly. 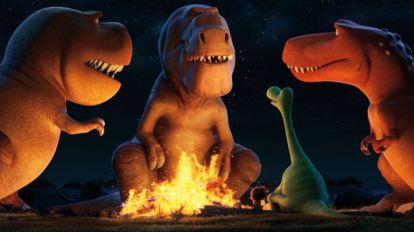 As Saika figured, The Good Dinosaur is essentially a “boy and his dog” type of film to the letter, with a dash of “living up to father’s expectations” on the side. And while it was cute, it was extremely safe. In fact, it almost felt like they were backtracking from Inside Out, as if they feared that was too progressive or something. With the immediate humanization, and thus gendering, of the dinosaurs, it’s clear that this film had no space for the ladies. While there was more than one female character, said characters weren’t really even characters. Both of the antagonists—a group of pterodactyls and a group of velociraptors—both have a girl in their group, but neither of the groups get any characterization except the leader of the pterodactyl gang. Arlo’s mother exists to be some generic symbol of a mother, rather than an actual mother—and apparently can’t do farm work herself, which is an extremely questionable choice on the director’s part.

And while Buck, Arlo’s older brother, at least gets the stereotypical characteristics of a sort of bully character, his sister Libby gets no characterization whatsoever. She doesn’t get speaking lines either. She’s just… there. The only female character that has any personality is the daughter of a rancher T-rex, who is just kind of a stereotypical hick (but so is her brother, so I guess that’s not so much of a problem). I didn’t watch Inside Out, but I feel like Saika was right in implying that Disney has a long way to go in gender representation. Arlo was never forced to share the spotlight except with, well, Spot. This was a movie about boys, for boys. And in all seriousness, comparing to the female-focused film that is most like it, Brave, it’s honestly bullshit that I know exactly what drives Merida’s brothers and what kind of characters they are, but I can’t even say what Libby does on the farm.

The other problem that I had with the film is that the villains seem kind of superfluous. There was already a “villain” in Arlo’s story without the inclusion of the pterodactyl gang: Arlo’s fears. While The Good Dinosaur did have the lesson of “being kind to people will help you in the future”, the strongest message the film gave to its audience was not to let fear stop you from experiencing life to the fullest. After Henry was swept away to his death, Arlo developed an intense fear of storms, going so far as to cower and see flashbacks to his father dying whenever they appeared on the horizon. While I understand that it might be more manageable for children to have a tangible enemy to root against, I do think the message may have been strengthened if Arlo overcoming his trauma wasn’t forced to happen because he had to save Spot from being eaten by the leader of the pterodactyls. Instead, if Spot was in danger from the elements themselves—a very likely possibility considering how volatile the area they live in is—and Arlo overcame his fears that way, it would seem more natural while having just as much impact.

Overall, The Good Dinosaur was a good movie, but it wasn’t a great movie. I do think the idea of having the dinosaurs be southern/western farmers, ranchers, and cowboys was incredibly interesting. I just wish that Pixar/Disney didn’t almost entirely go back on everything Inside Out offered audiences. There are no nuanced ideas here, nothing to make the audience think about how they and others interact and respond to the world around them. While Dinosaur’s messages are good, we all know we should be nice to people, and we know that our fears shouldn’t hold us back. Children are made aware of this by almost every other piece of media they can come in contact with. Even though the season beckons filmmakers to give their audience feel-good flicks, that doesn’t mean they can’t be complex or inclusive. In the end, The Good Dinosaur was a lost opportunity.