A lot of exciting things happened to me this Christmas—I saw Star Wars four times, got a Lego Millennium Falcon, and went into anaphylactic shock. Twice. It was an eventful time for me that I thankfully survived, and as my break started coming to an end, APerigren told me about this amazing scary movie called The Babadook that came out in 2014 and was both written and directed by Jennifer Kent as her directorial debut. Despite hating horror films because they give me nightmares, and disregarding the potentially fatal medical issues I just suffered through, I decided to traumatize myself even more by giving The Babadook a watch. This was a bad idea.

Regardless of my low tolerance for scary monsters and the subsequent nightmares the story gave me, I will concede that The Babadook is one of the better movies I’ve watched. The Babadook is a psychological thriller about a monster called the Babadook who terrorizes and possesses people. It’s also a giant metaphor for depression and grief.

Our story begins with Amelia. Her husband died six years prior in a car accident while she was at the hospital giving birth to their son, Sam. Afterward, Amelia’s grief overwhelmed her, and as the movie carries on, it becomes clear that she’s spent the past so many years suffering from depression. Even now, she has not yet come to terms with what happened and her loss—she doesn’t talk about her husband, cannot bring herself to celebrate Sam’s birthday, refuses to let her son hug her, and has a hard time finding joy or happiness in anything.

Sam, for his part, doesn’t come out of this unscathed either. He’s obsessed with monsters and making sure that they cannot hurt anyone to the point of being sent home from school consistently—he likes to build weapons like crossbows and take them to class. He’s socially awkward—he says whatever comes to mind—and as such, has no friends. 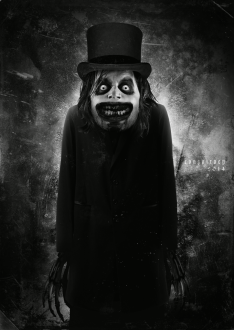 Life at their house is rather stressful, and things take a turn for the worst when Sam finds a new book on his shelf called Mister Babadook for his mom to read to him at bedtime. The book starts out innocent enough, with little rhymes like “if it’s in a word, or in a book, you can’t get rid of the Babadook”, but as the story continues, it becomes clear to Amelia that Mister Babadook is not something Sam should be reading. First, Amelia puts the book on top of a dresser and out of Sam’s reach, but the dresser falls over. Next, Amelia tears the book up and throws it out, but the following day it appears on her doorstep put back together. Now it also contains graphic images of the Babadook possessing Amelia and forcing her to kill her dog, Sam, and finally herself. So Amelia burns the book and hopes that’s the last of it.

Things don’t return to normal, though. Sam claims that he’s seen the Babadook around their house, doors start opening and closing, and glass shards make their way into Amelia’s soup one night. Amelia also starts seeing a strange man in a top hat and trench coat following her around. Needless to say, her life goes straight to hell. When the Babadook appears in her car, she freaks out and crashes into someone else, Sam gets so stressed that he has a seizure at one point, and when Amelia starts noticing the Babadook in her house, neither she nor her son can get any sleep. At the same time, part of Amelia is convinced that what’s happening is all in their heads, and the more she denies that the Babadook is real, the stronger it becomes, until eventually it possesses her. Amelia’s attitude changes drastically. She snaps at Sam, going so far as to verbally abuse him, and life in general just gets worse and worse and worse.

As the movie nears its end and the Babadook possesses Amelia, it forces her to kill their pet dog and then it attempts to force her to kill Sam. However, her love for Sam and Sam’s love for her gives her the strength to break free of the Babadook’s hold. Unfortunately, as its book tells us earlier, you can’t get rid of the Babadook, and it’s still in their house tormenting them. Amelia finds the courage to stand up to it, tells it that she’s in charge and that if it goes near her son again she’ll kill it. The Babadook flees to their basement, Amelia and Sam gain some new insights about each other, and they both start healing. Amelia throws Sam his first birthday party, his social awkwardness gets better now that he has a better, less toxic relationship with his mother, and Amelia finally starts moving on from her husband’s death. The last we see of the Babadook is it living in their basement, and every day Amelia takes it a bowl of worms to eat, because she can never get rid of it.

As someone who suffers from depression and anxiety and has trouble handling my own mental illnesses throughout my day-to-day life, The Babadook really speaks to me. Amelia suffers from depression, and the Babadook is the physical manifestation of her grief and inability to move on from her trauma. Furthermore, like most mental illnesses, the Babadook is completely invisible to everyone else but Amelia and Sam. Her neighbors can’t see it, the police can’t see it, and the social workers who visit their home can’t see it either, which makes Amelia question whether or not the Babadook is even real. But the way it affects Amelia is very real, and no matter how hard she tries to hide her suffering from Sam, he still notices and is hurt because of it.

Their relationship becomes unhealthy, and due to her illness, she abuses him emotionally, even though that abuse is clearly unintentional. Sam is easily excited, and Amelia doesn’t have the energy to keep up with everything he says and does—she snaps and curses at him for being incapable of taking care of himself, for saying everything that comes to his mind, and for his fear of monsters. His inability to make friends and get along with other children only makes matters worse. The lack of sleep brought on by all these things and the Babadook leave Amelia with a short temper and she’s incapable of handling everything. Even when she has control over her temper, it’s clear to see that Amelia just doesn’t have the energy to properly spend time with Sam and help him with his own issues. After the Babadook possesses her, Amelia starts having flashes and hallucinations of her killing her dog, son, and self, and she can’t get those thoughts out of her head. Sam suffers for it, and after each abusive incident, she realizes what she’s done and she feels horrible because of it. She attempts to make things up to him, even at her own expense—at one point she takes him out to eat when she clearly doesn’t feel up to it, but she does it because she feels so guilty that she needs to do whatever she can to make things right.

Through Amelia we can see how mental illness can tear apart someone and ruin all their relationships, and through Sam we can see how misunderstandings and a lack of proper care can lead to innocent people being hurt. 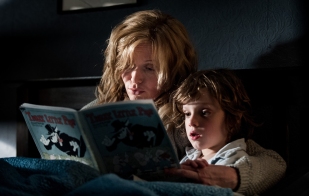 But what I think really makes this movie stand out is the ending. She can’t get rid of the Babadook. While Amelia can lead a normal, fulfilling life, she still has to deal with it and her grief every day—it lives in her basement, where she keeps all of her husband’s old things, which directly shows us that the Babadook is just the physical embodiment of her depression and that it will never go away, because her husband will always be dead. Comparatively, a movie like Inside Out has a much happier ending. Yes, Riley suffers from a bout of depression, and that bout irrevocably changes her life, and she has to deal with those changes for the rest of her life. At the same time, however, her depression gets better and she makes a complete recovery when Joy and Sadness make it back to her control tower. Inside Out is an important movie because not only does it show us what depression is, it also shows us that people with mental illnesses can recover, especially if they have support and understanding. What Inside Out teaches us about these issues is important, but what The Babadook teaches us is equally important: not everyone with depression will recover.

Both Riley and Amelia suffer from depression due to outside factors—Riley couldn’t handle moving and Amelia’s husband died and left her a single mother—but both characters try to learn to deal with it, and that isn’t easy on either of them. Like Riley, Amelia’s relationship with her friends and family suffers, she loses the parts of herself that allow her to feel joy, and sometimes it seems like the only reason she keeps going is because she feels obligated to care for Sam. Riley recovers from her depression fairly quickly and is able to return to being a happy child. Amelia, on the other hand, doesn’t. Her depression started years ago, and even after standing up to the Babadook, it still doesn’t go away. For Amelia, it’s entirely possible that her depression will last for many more years, potentially for the rest of her life. Amelia doesn’t just have a single bout of depression, she probably has dysthymia or major depressive disorder. Whatever her condition, it was only worsened by all the added stress she underwent over the years. Eventually we see that Amelia might be able to live a normal life with Sam’s help and support and she may be able to manage her illness, but her illness is still a life-long part of her.

As such, the ending to The Babadook manages to be both upsetting and uplifting. While I immensely enjoyed Amelia and Sam getting better, at the same time, the movie was a stark reminder of the state of my life and my own metaphorical Babadook that I’ve been putting up with for years now. The Babadook is a must watch for anyone who knows someone with a mental illness or for anyone who wants to learn more about what living with mental illness is like. Despite that, this movie can be hard to swallow for those of us who are mentally ill, because it presents our illness as a literal monster tormenting us, and that can be a little too close to home for some people. I don’t say this because I think the movie is bad or bad representation—I think quite the opposite, in fact. Whether or not it intended to, The Babadook succeeds in giving us a great story about depression, grief, and recovery. I would check it out if it interests you, but I would do so at your own discretion, because the movie can easily be triggering.

7 thoughts on “In Brightest Day: Depression in The Babadook”