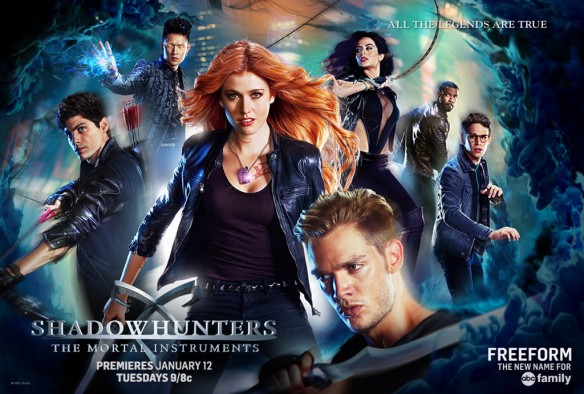 Shadowhunters premiered last night, and while it wasn’t everything I had been hoping for, it was certainly enjoyable. Not only was this a good start at bringing in a newer audience to the series, the show takes a lot of creative liberties with the original source material and changes enough things around that even someone who has read the books can be surprised by all the developments happening. As the first book is told almost explicitly from Clary’s POV, we don’t get to see a lot of the Shadowhunter world. On the other hand, Shadowhunters isn’t limited the same way. The show is taking the time to explore and develop its universe by engaging with characters we don’t get to see all that often in the books. The first episode “The Mortal Cup” was fun, exciting, and had enough new things going on that I didn’t know what to expect all the time.

“The Mortal Cup” makes use of flashbacks to let us know what’s going on in the Shadowhunters universe. In the books, we don’t learn what’s going on until Clary does—the same is not true of the TV series. In the show, the audience knows more than Clary, and by the time the first episode ends, Clary is just starting to learn about demons, Shadowhunters, and that the supernatural exists. She still does not know how she and her mother are tied into everything, though.

Well, this is violating.

Clary’s mother Jocelyn used to be a Shadowhunter—someone who hunts demons—but she upset some powerful people and spent the past eighteen years on the run with her best friend Luke and daughter Clary. For reasons currently unexplained, Jocelyn chose to hide the supernatural world from Clary and raise her as a Mundane—a normal human. As such, Jocelyn had a warlock named Magnus Bane erase Clary’s memories every time she saw something supernatural. Now that Clary’s turning eighteen, the spell Magnus put on Clary starts wearing off. Clary ends up drawing runes in her sketch book and starts noticing strange happenings. At one point, while out to eat with her friend Simon, Clary sets a piece of bread down on her portfolio, and when she goes to pick it up later, the bread is gone and replaced by a pencil drawing of a piece of bread instead. Note: this particular skill will be super important in later episodes.

Later on that night, Clary also witnesses a bunch of Shadowhunters killing demons. Distraught, she runs back home to her mother to tell her what’s happening. Before Jocelyn can explain everything, a bunch of rogue Shadowhunters—the people she upset—show up at their apartment. Although Clary gets away safely, in the ensuing fight, Jocelyn finds herself captured, so she takes a potion to put herself into a coma. This way, she’ll be unable to tell the Shadowhunters where something called the Mortal Cup is located.

As events continue, Clary ends up at the Institute, a supposedly abandoned church that acts as the Shadowhunter headquarters in New York. Simon tracks Clary’s phone to the Institute and the episode ends with him also finding out that magic and Shadowhunters are real.

All in all, I really liked this episode. I didn’t expect it to be the best thing ever, because the books aren’t great, either. But as a story idea, City of Bones is pretty decent, and if nothing else, “The Mortal Cup” was a fun start to what will hopefully be an improvement on the source material. As I said earlier, the TV show takes a lot of creative liberties, and in this case I would say that they work. I really enjoyed getting to meet numerous characters—such as Magnus and the main villain Valentine—early on, instead of having to wait until the very end. We don’t see Valentine in the first book until it’s practically over, so it’s nice that our villain will have more of a presence, and hopefully because of that, Shadowhunters will do a much better job developing his character.

Another change is that all the characters are older, which not only makes sense to me—the books feature a bunch of fifteen year olds hanging out in clubs—but is also something that I think works a lot better with the characters. Despite being high schoolers in the books, the characters didn’t really act like it all that much. They were certainly immature and juvenile, but given their mannerisms and diction, it wasn’t in a way that was generally typical of fifteen year olds. On top of all this, a couple of events are also out of order, such as the reveal that Clary’s neighbor Dot has been killed and replaced by a shape-shifting demon, which we’re not supposed to find out until the characters learn where Jocelyn hid the Mortal Cup later on. I think it’s too early to say whether or not that will be for the best—though I am excited to see what the show will be doing with these changes in the future. As a big change, the Institute is filled to the brim with Shadowhunters other than the main characters, which will probably be another good way for us to learn about the Shadowhunter society and role they play in the world.

Now that the first episode is out, it’s also taken racists no time at all to be pissy that Luke is now Black, because in a world with supernatural demons, faeries, and Shadowhunters, what’s really breaking the suspension of disbelief is a main character who’s not white. I should also point out that Luke’s skin color is never specifically mentioned in the books. And even if it was—he is supposed to have blue eyes, which I should also point out is not specifically a Caucasian trait—it shouldn’t fucking matter.

I love drinking the tears of racists.

All in all, I did love this episode, even if it seemed to struggle a bit with pacing and some odd dialogue decisions. I feel like most of the problems in the first episode are common among pilots, but it was certainly nowhere near as bad as other shows. I have hope that Shadowhunters will improve in the future and continue to expand on Cassandra Clare’s books in interesting and unique ways.