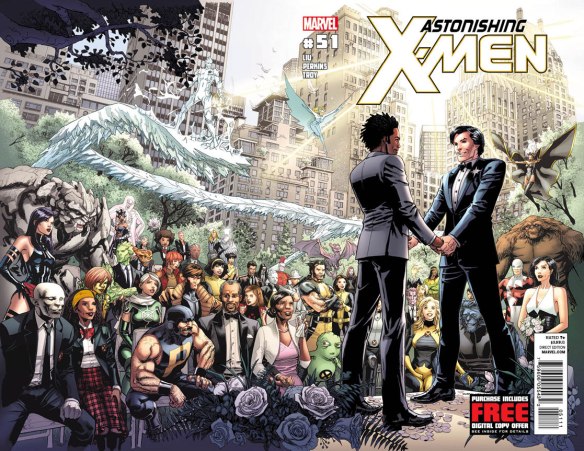 I have been pretty impressed with comic book movies lately. Yeah, it’s still not ideal, but both Marvel and DC Comics have far more women and people of color in their upcoming movies than they had before. At least now in Marvel we have Natasha, Pepper, Wanda, and Sam Wilson and James Rhodes, and we’re about to get Black Panther and Captain Marvel, but we don’t have one single queer character. And in DC Comics we are finally getting Wonder Woman, Aquaman (played by Jason Momoa), and Black Atom (played by Dwayne Johnson), but again, still no queer characters. It’s pretty nice to see even some progress being made—well, in some areas at least. When it comes to queer representation, both DC and Marvel Comics are severely lacking even to the point of straightwashing queer characters. Despite gay marriage being legalized in the United States, continuing to be legal in at least nineteen other countries, including countries like France, South Africa, Argentina, and Brazil, and gay rights gaining ever increasing support, it seems The Powers That Be are still hesitant about including gay characters in their comic book movies. 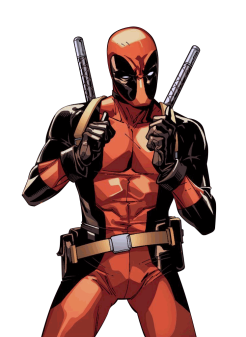 This can first be seen in how often comic book characters have been straightwashed. Constantine, a canonically bisexual character, was portrayed as straight in his movie. Neither Iceman nor Colossus were revealed to be gay in the X-Men movies, despite being queer in the comics. And Mystique, another bisexual character, is only ever shown as being interested in Magneto, but never any female characters. Catwoman came out as bisexual in the comics, but her sexuality has never been acknowledged in any of the comic book movies. And Deadpool, well… we’ll have to wait and see if his pansexuality is portrayed or if they simply turn him into another hetero superhero. Turning queer superheroes straight seems to be the norm for most comic book movies and is extremely harmful. When queer comic book fans hear that these characters are going to be in movies, we get excited, thinking that we’ll finally see some representation, but instead we get pushed back into the closet along with the characters that we love.

Then of course there is the refusal to even include gay characters in the cinematic universe. Both Moondragon and Phyla-Vell, a canonical lesbian couple in the comics, were not included in the Guardians of the Galaxy movie. There is some hope that Moondragon could appear in the future, because of her connection with Drax, but considering Marvel’s current history of not including queer characters, I’m not getting my hopes up. Then of course, there was the shelved Runaways movie, a movie that would have included a team of teen superheroes with more female characters, characters of color, and LGBTQ+ characters. Apparently the movie was shelved because Avengers was a success and TPTB didn’t want to take a chance on a less well known franchise, and because getting the Avengers crew together basically consumed Marvel’s phases for their universe. There was some talk about the Runaways being included in phase three, but as of right now it seems unlikely to happen. However, I really think there is more to it than that. It could have been easy to introduce the Runaways in some capacity in one of Marvel’s many movie phases. But we can’t even get a Black Widow movie, so it seems unlikely that Marvel is going to take a chance on a young superhero team predominantly featuring women, people of color, and queer characters. 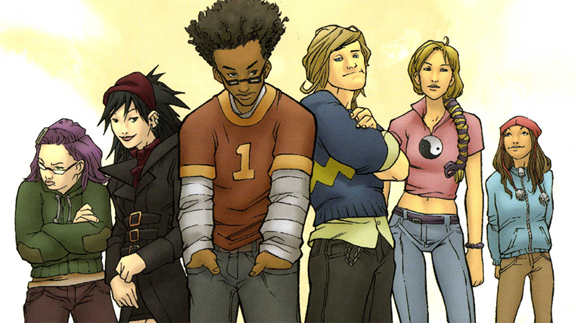 Then there is the refusal to include more queer characters by having old characters “come out” in the movies, so to speak. This is something that has happened more than once in the comics, though. As I mentioned above, Catwoman came out as bisexual in the comics and Alan Scott, one of the Green Lanterns, was revealed to be gay after the New 52 reboot. It seems silly to hold so ardently to the hetero sexualities of the majority of comic movie characters when we have already seen how things change over time in the comic book world. Heimdall and Nick Fury are now Black and, though the change has only been in the comics, Thor is now a woman. Why can’t certain key characters then be revealed to be queer in the movies? There has certainly been enough support for things like bisexual Steve Rogers and bisexual Peter Parker online. Certain characters like Harley and Poison Ivy, who also have huge online support, have been teased as being a canonical couple in the comics, but it was never made official in either the comics or movies. I’m sure changing a character’s sexuality would upset homophobes and comic book purists, but any change to comic book canon tends to do that, and that didn’t stop TPTB from changing the race of characters like Heimdall or Nick Fury, for example.

As a pansexual woman, I know that being gay is still an issue for some people, but I don’t think that allowing prejudiced people to dictate what’s in our media is the right way to combat these prejudices. Both Marvel and DC Comics have a chance for more diverse representation as their movie universes continue to develop. It would be nice to finally see even a little representation for LGBTQ+ people in the movie universes—after all, we exist in real life. I can’t say I am necessarily hopeful that this will happen, but there is definitely opportunity for such a thing. This is a problem in comic book movies that needs to be fixed and addressed and I certainly hope that Marvel and DC step up to the plate soon instead of allowing prejudice and fear to govern their choices. 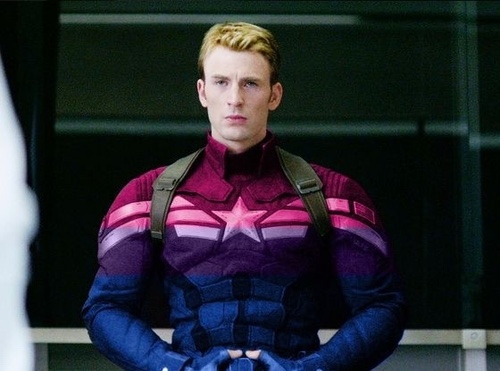