Dang, this movie came out seventeen years ago.

The return of The X-Files has had me reflecting more and more about the state of pop culture in the ’90s, and I’m coming to the conclusion that it’s impossible to understand the ’90s without watching The Matrix. Not only plot and character, but the very look and feel of the The Matrix heralded the arrival of the 21st century with a sharp critique of the past decade.

In 1989, the Berlin Wall fell, and within two years, the Soviet Union was gone. By 1992, Bill Clinton had been elected president, and Keanu Reeves was famous for playing Ted “Theodore” Logan in not one, but two Bill & Ted movies. For a moment, all was well in the world.

Or so it seemed.

America felt a surge of euphoria after World War II, but this collapsed once the threat of a nuclear apocalypse appeared in the immediate aftermath. Meanwhile, America’s long history of white supremacy could no longer be ignored—in the very first election after V-J Day, segregationists abandoned Harry Truman and gave thirty-nine electoral votes to the monstrous Strom Thurmond.

But at the beginning of the ’90s, such demons seemed buried. America was apparently entirely without enemies, and nuclear war was a distant nightmare. Yes, Thurmond was still in the Senate, but he was a harmless old coot.

Toni Morrison proclaimed the (white, Southern) Clinton to be America’s first black president, an image which let him blow off the Black radical Sister Souljah as obsolete and divisive. It earned him great praise and launched him toward a presidency where global stability and a tech boom created enormous peace and prosperity. For a moment, the American Dream seemed real again: anyone—no matter their race or gender—could be rich with hard work, a great idea, and the fortune to be born in the United States. But it was all a lie.

The ’90s were the peak of the mainstream in American society. Ostensibly open to all, pressures built on all sides against anyone who wouldn’t buy in. The shootings at Columbine High School led to the characterization of bullied outsiders as violent psychopaths. Politicians seized on rap music to denigrate Black culture, at least if the performers weren’t co-opted by corporate labels. Poverty was criminalized, as Democrats and Republicans alike rushed to cut welfare and fill prisons with low-level drug offenders.

In short, American society became just open enough so that there was no need to support the people left on the outside. Get a job, pay your taxes, and shut up. Enter The Matrix.

The Matrix turned the ’90s on their head. Computers were no longer the pillars of the Dow Jones Industrial Average, they were our masters, deceiving us into believing that to be a good human, “you have a social security number, pay your taxes, and you… help your landlady carry out her garbage.” In parallel, though, technology empowers individuals, giving weak ones instant strength—it doesn’t all belong to Agent Smith or Microsoft.

Neo has an everyday life as Thomas Anderson, a mild-mannered software programmer in a grey, washed-out, unnamed American city. He affords a middle class lifestyle, fulfilling the ’90s-era American dream, but chases some sense of emptiness into a chaotic world of hackers, where he is sought out by other hackers who identify themselves as Morpheus and Trinity. Joining their company transforms him into a criminal—an act which immediately drops him out of the mainstream. Soon, the world is ripped away, as Morpheus teaches him that what we understand to be the real world is a simulation—“the Matrix is the wool that has been pulled over your eyes to blind you from the truth.” The truth is that humanity is locked in a cataclysmic struggle with self-aware machines, battling for the future of the world.

Neo is asked to choose. The ’90s mainstream suddenly becomes optional: do you take the blue pill, and lapse back into false comforts, or the red pill, and engage in the real struggle? Though the imagery has been co-opted by the Men’s Rights movement, it’s a dramatic choice being offered. Is there something greater out there, after all, beyond a plentiful consumer culture? Do you submit yourself to a mechanized society, or break free? Neo takes the red pill.

The great shock of freedom is the discomfort. In the real world, Neo lives in a warzone, near-starving and in pain. The Matrix never denies that there’s a cost to opting out, and the physical and emotional stresses cause Cypher to betray the heroes. But Neo, Trinity, and Morpheus ultimately prevail, justifying the risks and the suffering. Neo broadcasts a final message to the Agents who enforce the rules of the Matrix: “I’m going to show these people what you don’t want them to see. I’m going to show them a world without you. A world without rules and controls, without borders or boundaries. A world where anything is possible.” Viewers feel those same rules, controls, borders, and boundaries, and the movie demands their removal.

Over the course of the movie, The Matrix centered Otherness, in open and obvious defiance of ’90s norms, pushing at the same boundaries Neo excoriates. It embraces weirdness over familiarity, with horrific robot monsters, a loud and abrasive soundtrack, aggressive leather costumes, and an unearthly green tint over everything. It unites evil and conformity with Agent Smith, a white man in a plain suit, whose features are hidden behind dark sunglasses. He has the ability to take over any body in the Matrix, and pursues the heroes through them. It dances through myth and legend, privileging them after happily dispensing with all of orthodox history as an illusion. And despite the sci-fi setting, it prefers magic and prophecy to technobabble—Neo is the Chosen One, appointed by the Oracle.

Finally, unlike almost any other movie of the time and genre, The Matrix rejects straight/cis/white/male normativity. Lana Wachowski’s gender identity was private at the time, but there are distinct trans themes, even if they’re not made explicit. Bodies are uniquely variable within the Matrix, a point Morpheus draws particular attention to. Likewise, after Thomas Anderson comes to identify himself as Neo, he forcefully rejects the Agents’ use of his deadname. Even his costume thus diverges from archetypal masculinity of the Agents’ suit and tie, almost becoming a dress.

Moreover, Keanu Reeves himself is multiracial, and while he usually plays white characters, his racial identity is somewhat ambiguous here. More distinctly, neither of his primary allies are white men: Morpheus is Black and Trinity is female. Both defy stereotypes: Trinity’s aesthetic—short hair, severe black leather, unsmiling—contrasts sharply with the Britney Spears vision of femininity in the late ’90s, inserted into the plot via the artificial Woman in Red: 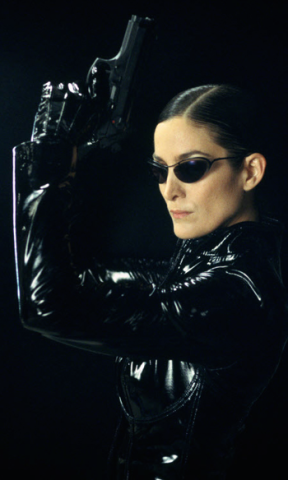 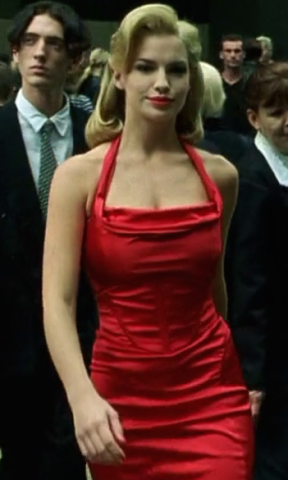 Morpheus comes dangerously close to the Magical Negro archetype, but he remains much more than Neo’s mentor. He’s wise, powerful, and idealistic, but Neo is fighting Morpheus’s war, not the other way around. The supporting cast is diverse as well: the Oracle, Tank, and Dozer are all played by people of color. Only Agent Smith and Cypher are white men, and both are villains who prefer the Matrix to reality. In other words, the vision of the ’90s is mainly appealing to white men. It’s no coincidence that the two conspire in a steakhouse, the shrine of white masculinity.

By the time The Matrix: Reloaded was released in 2003, the ’90s were not only over, but dead and buried. The tech bubble had popped, and surging unemployment mocked any aspirations to Neo’s old, comfortable lifestyle. September 11th shattered the vision of eternal peace, as the United States entered two foreign wars. Same-sex marriage was under debate on a national stage, disrupting the assumed heteronormativity of the ’90s. Under the Patriot Act and stop-and-frisk, racial injustice was obvious again. The Matrix had melted away, and the country started taking up its real struggles once again.

Did the Wachowskis have us prepared?

2 thoughts on “Throwback Thursdays: The Matrix Broke the ’90s”