We got a double dose of our favorite secret agent this week, although the episodes were each a little Peggy-lite. First in body, as Peggy was still recovering from her grievous injury, and then in mind, as she made a series of uncharacteristically stupid decisions.

Spoilers after the cut!

We open on Team Good Guy, with Peggy and Jason brainstorming how to keep him on this plane of existence. Wilkes believes if he builds a sort of containment booth and absorbs some zero matter while inside it, he can use the booth to both regain and maintain his physical form. Unfortunately that means they need more zero matter, so they have to go after Whitney again for a blood sample. Peggy’s both injured and far too recognizable, so they decide they need to break Dottie Underwood out of S.S.R. supermax to infiltrate a campaign party for them. Why Dottie? I don’t know. I definitely thought they were going to ask Violet, who, as a nurse, would be perfectly capable of doing a sneaky injection, or in a pinch, bring back Angie, who would have been able to fawn over Whitney and play up her aspiring actress schtick to get her guard down. While this episode ended up being a feast for Peggy/Dottie shippers, none of the myriad safeguards they tried to put in place to keep Dottie from escaping seemed like they were going to last the episode. Everything she said was delightfully evil, but… when everything she says is delightfully evil, there isn’t a very good case for hinging your whole heist on her. 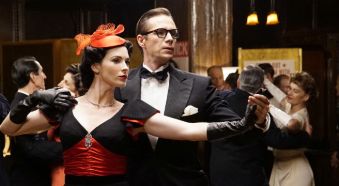 She does have this cool Black Widow-y dress though.

Anyway, they get Dottie and Jarvis into Chadwick’s campaign party, and Dottie quickly acquires the sample from Whitney—but it can’t be that easy. She hides in a room that turns out to be the Council’s Room Where It Happens, with “It” in this case meaning “secret meetings between the Council and Whitney Frost”. Whitney demonstrates her zero matter abilities for the Council and they immediately try to assassinate her; in retribution, she zaps half of them into nada, including dear old hubby. With the remainder of the Council under her thumb, her power is growing by leaps and bounds. Dottie is able to escape the room, but she’s attacked by Whitney’s guards as she flees, and is kidnapped—although she manages to (perhaps accidentally?) leave the sample behind for Jarvis to find. Proving yet again that perhaps zero matter has a debilitating effect on Peggy’s brain, Peggy has no safeguards in place to prevent her getting away besides a kill switch she refuses to use and a radio in a hat that Dottie can just… take off.

Whitney takes Dottie back to Villainess HQ, where Vernon Masters tries ineffectually to torture her for information. After a while of this, Whitney comes in instead and uses the zero matter as an interrogation technique, flooding Dottie’s system with it and then pulling it back out. Between this and the power she displayed in absorbing all those Council members, it’s clear she is gaining much more nuanced control over the zero matter.

Also, throughout all this, the ever-annoying Masters spends the episode leaning on first Thompson and then Sousa to throw Peggy under the bus. Her investigation is getting too close to his involvement in the Council. Thompson, torn between his respect for Peggy and his political ambitions, attempts to command her to come back to New York, but ends up allowing Peggy to have her way. Sousa doesn’t even bother, and so Masters has some thugs kick Sousa’s ass so he can step into the L.A. S.S.R. Chief role. I hope Masters gets his comeuppance in a satisfyingly brutal way soon.

RIP hubby whose name I can never remember.

Back at the Stark estate, meanwhile, Wilkes gets his cage thing up and running and—gasp—it works! This seems like a great time for the team to start making more stupid decisions. First, Wilkes kisses Peggy in front of everyone, which kicks off a gossip session between Jarvis and Peggy about her and Wilkes and Sousa, when from a narrative perspective this love triangle is kind of nonsense.

The bad idea train rolls on from there, when Peggy, even though she seems to have chosen Dottie for (as best I can tell) her disposability, decides she has to get her back from Whitney as a matter of honor. She and Jarvis head out, leaving Ana and Wilkes alone and unprotected at Stark’s. They’re immediately captured upon arriving at Villainess HQ, and Dottie is less than pleased to see them. Belatedly, Peggy realizes that Whitney was counting on her coming for Dottie to get them out of Stark’s house—so that Whitney could sneak in after Wilkes. 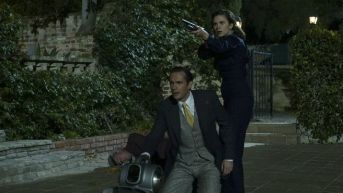 They race back to L.A. but not soon enough. Whitney tries to get Wilkes on his side by basically saying ‘hey, we’re both marginalized, we gotta team up and fight back against The White Man’, but Wilkes isn’t willing to become a bad guy to do that. With that method of convincing him off the table, she opts instead to knock him out and kidnap him.

And, to cap off an episode full of stupid, the writers did a terrible thing. All through both episodes Ana kept hovering over Jarvis, more and more worried that his forays into espionage were going to get him killed, which, understandably, left me worried for Jarvis. Needless to say, my worries were misplaced; instead of going after the Mr., they tried to off the Mrs. Yep, a big ol’ bait and switch left poor Ana the one with the bullet in her at the end of the episode, with no guarantee that she’ll make it through.

There’s another double episode next week, and I’m holding out hope that they can’t possibly blot out the bright spot that is Ana Jarvis in such a horrible way. Also, blah blah the stakes are high with Masters and oh no Wilkes is kidnapped and whoopsie, Dottie’s on the loose again and boo hoo there’s going to be love triangle drama with Sousa, but I really am most concerned about Ana’s welfare at this point. She is a sweet cinnamon roll, too precious for this fate, and I’ll be booking a flight to L.A. to deck someone Peggy-style if she bites it. We’ll find out in a week, I guess; till then!